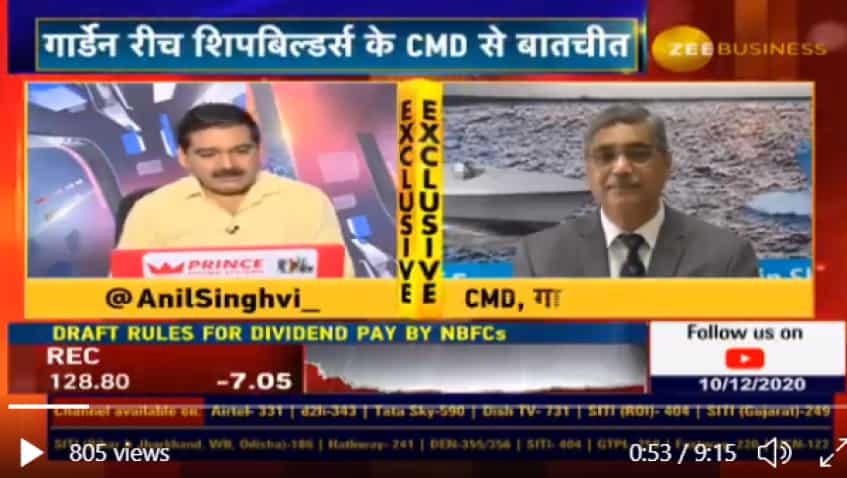 He said the company already builds warships for Indian Navy, however, given the government’s thrust on export, the company for the first time has done bidding of an ocean-going ferry of 13 million USD for Government of Guinea and is a successful bidder.
Reported By: ZeeBiz WebTeam
Written By: ZeeBiz WebTeam
Edited By: Harish Dugh
RELATED NEWS

He said the company already builds warships for Indian Navy, however, given the government’s thrust on export, the company for the first time has done bidding of an ocean-going ferry of 13 million USD for Government of Guinea and is a successful bidder there. He said as per the information, there is a good chance that the company will get letter of acceptance from the Government of Guinea and shortly contract will also be signed. “It’s not a very big project, but certainly a good beginning for us,” he said.

Watch detail coverage in the video below:

He said the thrust on export by the government is a very healthy development for the company as well as all Indian shipyards, either private or Defense. “Grant is required to push exports. Many countries such as South Korea, Japan, China and others that support their shipyards get good result in export. Similarly, this grant will help Indian shipyard and push their export due to competition in the sector,” VK Saxena said.

About the scheduled launch of P17 A Frigate, Saxena said P17 A Nilgiri, the first ship of the class frigate, will be launched on December 14. “ It’s a massive ship and a mega shipbuilding project for us. The ship is 149 metres long and it is 6,670-tonne frigate. This will be the most advanced and modernized frigate of the Indian Navy and ‘birth of the ship’ will take place on December 14,” he said.

Saxena said the company, which has orders of three P 17 A ships, also plans to launch another ship within 15 months, to give an edge to the Indian Navy.
We have so far delivered 105 ships to the Indian Navy and coastguard, he said. This will be 106th ship that company will deliver to our maritime forces, said Saxena.
“We also have one major project of the Navy of eight anti-submarine warfare shallow water craft (ASWSWCs) worth around Rs 6,300 crore that has almost completed design phase. We plan their production from December end itself,” he added.