The Russian market is "starting to turn", Ford CEO Mark Fields told Reuters last week, promising to stand by the company`s investments in Russia. "Our intent is to build on that." 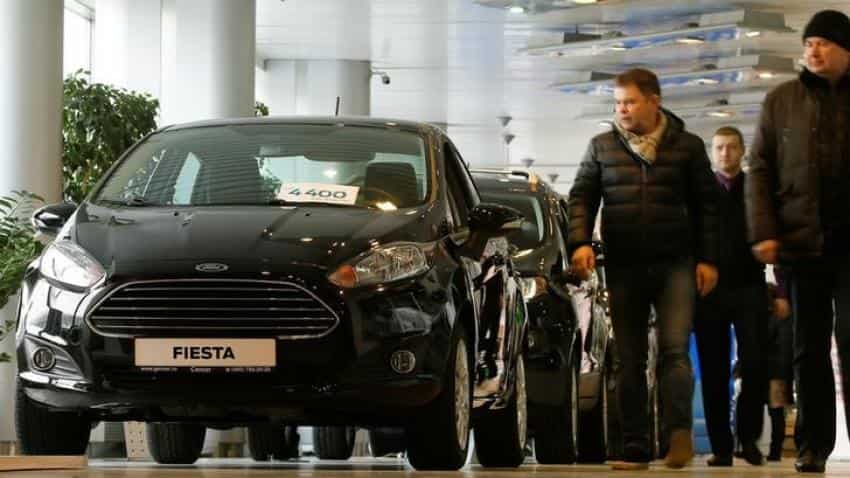 Ford has become the first major foreign carmaker in Russia to see sales grow after three bad years, potentially vindicating its decision to double down on a notoriously volatile market when rivals decided to cut and run.

Sales of cars in Russia have fallen by more than half since a 2012 peak of 2.9 million vehicles, due to an economic crisis brought on by low oil prices and Western sanctions. The market fell by 11 percent last year, and was down a further 5 percent in January from a year earlier.

Ford`s big U.S. rival General Motors pulled out of Russia two years ago. But Ford chose not only to stay, but to keep investing, launching new models with modifications designed to suit the country`s harsh driving conditions.

Since 2011, its joint venture with Sollers, a Russian partner, has ploughed $1.5 billion into making cars locally to local specifications.

Now Ford`s sales have turned a corner and rose 10 percent last year, an achievement the company says is proof its strategy is at last paying off.

The 40,000 Fords sold in Russia last year are still barely more than a fifth of the almost 190,000 vehicles the company sold in 2008, before the global financial crisis brought the first of two collapses in the Russian car industry in less than a decade.

During the latest crisis, Ford`s share of the market for foreign cars fell at the expense of Korean competitors Kia and Hyundai, which chose to shore up market share through aggressive pricing. But now their sales are still falling, while Ford`s are on the rise.

The Russian market is "starting to turn", Ford CEO Mark Fields told Reuters last week, promising to stand by the company`s investments in Russia. "Our intent is to build on that."

The Association of European Businesses lobby group forecasts the Russian car market to finally stabilise this year and grow by 4 percent. But it will still be years before a full rebound.

"Despite the economic turbulence, we didn`t cut investments and delivered the initial plan to launch seven new vehicles with a significant level of localisation," Mark Ovenden, CEO of the Ford Sollers joint venture, told Reuters.

He noted that the company opened a $275 million engine plant in 2015, a year in which Ford`s Russia sales nosedived 41 percent. The joint venture now operates four plants in Russia.

New models, such as the Fiesta hatchback and EcoSport SUV, have been adapted for Russian conditions of bad roads and extreme cold, with higher ground clearance, anti-corrosion finishes and engines adapted for lower grade fuel, Ovenden said.

Ford would not say when it thinks its Russian operations will earn money. A spokeswoman declined to comment on profitability in Russia, saying Ford does not break down its European operations by individual market.

Vladimir Bespalov, an analyst at Russia`s VTB bank, said Ford`s Russian operations were still loss-making but could be profitable as soon as 2018.

IHS analysts predict Ford`s sales in Russia could rise to 60,000 vehicles by 2020. "But it`s going to be a long, slow build up," said Tim Urquhart, principal analyst at IHS Automotive.

Even at such small numbers, sales growth in Russia would mark a bright spot for Ford`s European operations after it warned last month that the impact of Britain`s vote to leave the EU would put a $600 million dent in its 2017 earnings.

"POINT OF NO RETURN"

Russia has been one of the great dream markets for carmakers since the automobile was invented.

Ford first entered Russia in 1907 under the reign of Tsar Nicholas II, but foreign automakers were shut out during the Soviet era when Moscow built its own industry. Well into the 2000s, the market was still dominated by boxy Ladas built on a design licensed by the Soviets from Fiat in the 1960s, leaving huge pent-up demand for more comfortable and reliable models.

A decade after the Soviet Union fell, Ford opened Russia`s first foreign car plant in St Petersburg in 2002. By the time of its sales peak in 2008, some Russian automotive experts predicted the Ford Focus could become Russia`s new national car.

Although that ambition now seems far off, the decision to invest so heavily in building cars locally was one reason Ford decided to stay when GM left, said Bespalov.

"Ford passed the point of no return in terms of investment," he said. "Ford and GM were in different situations. For Ford the decision to continue to invest meant fewer losses than a decision to leave. For GM, it was the other way round."

Urquhart noted that GM had also been hurt worse than Ford globally by the 2009 downturn, giving it more reason to be cautious in the years that followed.

IHS` Urquhart said it was still unclear whether Ford`s bet on Russia would pay off in the long term, but its presence in Russia would help cement its position among the world`s biggest car producers.

"If you want to be a global carmaker, you`ve got to be in the Russian market," he said.