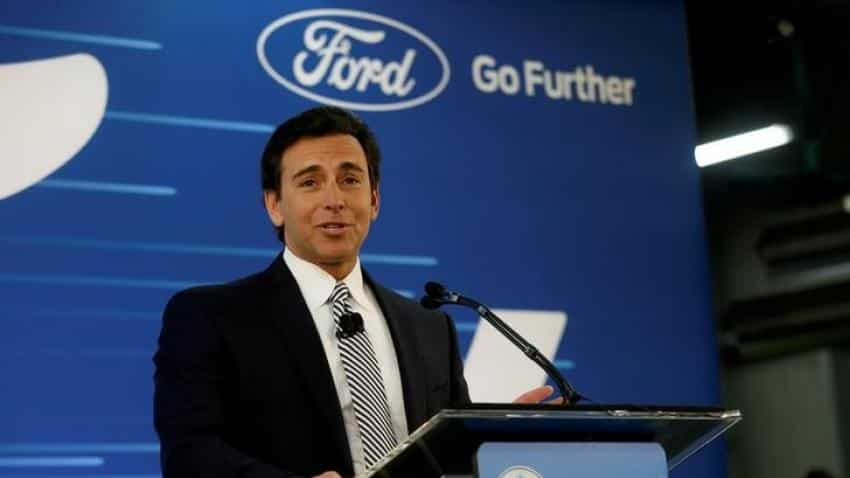 Ford Motor Co on Monday said it was replacing Chief Executive Officer Mark Fields with James Hackett, the head of the unit developing self-driving cars, in response to investors` growing unease over the US carmaker`s stock performance and prospects.

The departure of Fields, 56, is among a series of management changes announced. Hackett, 62, a former CEO of furniture manufacturer Steeelcase Inc, will take the helm in a broader shake-up aimed at speeding up decision-making and improving operations.

Ford shares were up 2.3% in trading before the market opened. At Friday`s close, they had fallen 37% since Fields took over three years ago, at the peak of the US auto industry`s recovery.

US sales are slipping, and Ford`s profits are trailing those of larger rival General Motors (GM), whose shares fell 13% over the same period. Ford`s board and Chairman Bill Ford Jr have been unhappy with the company`s performance and sought reassurance that investments in self-driving cars, electric vehicles and ride services would pay off.

"We’re moving from a position of strength to transform Ford for the future,” Bill Ford said. "Jim Hackett is the right CEO to lead Ford during this transformative period for the auto industry and the broader mobility space."

The upheaval at Ford underlines pressure on all three Detroit automakers to prove they can avoid losses as the US market begins to slow from last year`s record sales.

The shake-up at Ford may bring new scrutiny of its own plans in the region. Jim Farley, Ford of Europe chief since January 2015, is set to move to oversee all of the company`s regions, global marketing and sales, as well as its Lincoln Motor Co.

The company is also replacing its head of communications.

Ford posted a record $1.2 billion profit in Europe last year but warned the impact of Britain`s vote to leave the European union would put a dent in 2017 earnings.

Fields, who earned $22.1 million in 2016, also faced a clamor for share repurchases, which boost the value of stock, at Ford`s annual meeting earlier this month. "Confidence is created by hard currency, not proclamations that are often qualified," one investor said in a question read by the chairman.

Ford said last week it would cut 1,400 staff positions in North America and Asia, a small fraction of the 20,000 job reductions some news outlets had reported were imminent.

Fields had outlined a variety of plans to confront challenges from technology companies such as Alphabet Inc that want to control a future of autonomous, data-intensive vehicles.

"You have to have one foot in today ... but also one foot in the future," Fields told reporters last month. "I think investors understand our strategy."

Among his bets on technology is a plan to invest $1 billion over the next five years in tech startup Argo AI.

Ford has churned out strong profits on his watch, reporting a record $10.4 billion in pretax earnings in 2016.

However, investors were concerned by a weak first quarter and lower profit forecast for 2017, as well as higher costs for investments in "emerging opportunities."

Silicon Valley electric car maker Tesla Inc was valued at $51 billion on Friday, more than Ford`s $43 billion. The contrast is a dramatic sign of how little confidence investors have that old-line automakers can transition to a future where software substitutes for pistons and transportation is sold by the mile or the minute.

At the same time, GM is turning up the pressure on Ford in the North American truck and sport utility business, the source of 90% of Ford`s profits.

GM is gearing up an "onslaught" of trucks for the North American market, President Dan Ammann told Reuters last week, including a new generation of the Chevrolet Silverado large pickup that competes with Ford`s primary profit machine, the F-series line.

Ford also tangled with President Donald Trump, who spent more than a year criticising the automaker on the campaign trail for expanding operations in Mexico. But Trump praised Ford in January for scrapping a planned Mexican car factory and announcing plans to add 700 jobs in Michigan.

Fields has made several trips to the White House this year.