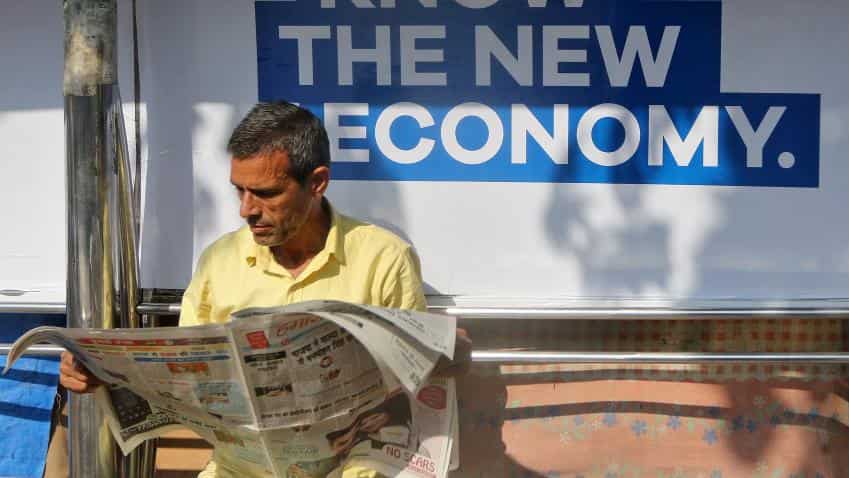 A man in a new metro in India reading a newspaper. Photo: Reuters
Written By: ZeeBiz WebTeam
RELATED NEWS

These cities are projected to record real GDP growth of 8.7% and 10.3% respectively from 2015-20, relative to metros’ 8.3%, according to an Ernest & Young (EY) report. As a result, both cities will cross the Rs 80,000 crore threshold within one to two years, with total consumption levels to reach 75%-80% of metros like Pune and Ahmedabad.

“We find that the greatest gaps between consumption and supply-side penetration lie in smaller new wave cities, and these disparities highlight the opportunities for businesses to expand beyond the major centres and plug this gap,” said the report.

The steady rise of modern trade channels and disposable incomes provide a strong platform for India’s FMCG industry, projected to grow 6%-8% annually till 2020.

Out of the Rs 14,600 crore FMCG ad spends in 2016, a large majority 74% of the ad spends went towards TV, while 19% went to print and 1% to radio. The report identified 10 untapped markets for FMCG brands to increase consumption which include Chandigarh, Dehradun, Jabalpur, Jamshedpur, Kolkata, Kota, Kozhikode, Trivandrum, Vijayawada and Vizag.

“Fashion (apparel and footwear) is the largest segment in Indian organised retail and this market is projected to grow at a healthy CAGR of about 13% during 2015-2020 from about Rs 4 lakh crore in 2015. While organised retail’s share of the national market is projected to rise from about 10% today to about 16% by 2020, many new wave cities remain under-penetrated and hybrid offline/online distribution models are becoming increasingly popular,” said the EY report.

Domestic passenger vehicle sales in India are expected to grow robustly at 9%-11% annually from 2015-20 to reach 4.0-4.5million units by 2020, said the report. Growth will be nearly as strong in the two-wheeler segment, which will grow at 8%–10% annually from 2015-2020 to reach about 25million units by 2020. With auto makers looking to tap into these growth opportunities, several new wave cities are particularly under penetrated. Some of these untapped market for automobile to advertise include Indore, Jodhpur, Kanpur, Kota, Mysore, Pune, Raipur, Vijayawada, Vizag and Warangal.