Wednesday will be a pivotal day for aircraft maker Boeing Co and federal aviation safety regulators as they try to rebuild trust following two deadly crashes of Boeing 737 MAX airliners. 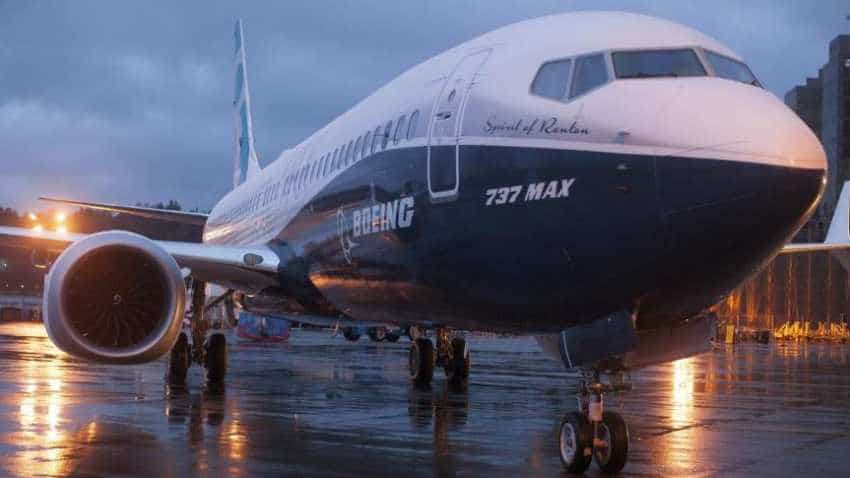 Boeing has scheduled a briefing on Wednesday for about 200 pilots and airline representatives in Renton, Washington, home of its 737 assembly complex. Image source: Reuters
Written By: Reuters
RELATED NEWS

Wednesday will be a pivotal day for aircraft maker Boeing Co and federal aviation safety regulators as they try to rebuild trust following two deadly crashes of Boeing 737 MAX airliners. Boeing has scheduled a briefing on Wednesday for about 200 pilots and airline representatives in Renton, Washington, home of its 737 assembly complex. The company is expected to outline changes to software that controls a system designed to automatically prevent a mid-flight stall.

Also on Wednesday in Washington, D.C., a U.S. Senate panel plans to question the acting head of the Federal Aviation Administration (FAA), the Transportation Department`s inspector general and the head of the National Transportation Safety Board about how thoroughly the 737 MAX`s automated flight control system was tested, and what will be done to assure that any fixes work.

WHAT CAUSED CRASHES OF LION AIR, ETHIOPIAN AIRLINES JETS?
Do Boeing and regulators know what caused the crashes of a Lion Air 737 MAX in October and an Ethiopian Airlines 737 MAX on March 10?
Investigations of both crashes are still under way, but Ethiopian officials and some regulators have pointed to similarities in both flight paths. An anti-stall system known as MCAS, or Maneuvering Characteristics Augmentation System, has come under scrutiny. The system is designed to anticipate a stall.

WHY INSTALL MCAS?
Why did Boeing install the MCAS in the 737 MAX?
The MAX has bigger engines than a conventional 737, and they are mounted closer to the nose. That can force the nose higher, threatening a stall. The MCAS was designed to use an automated system to anticipate a stall and act to prevent it without the pilot`s intervention. Two U.S. pilots unions said Boeing did not disclose the existence of the MCAS. Boeing has promised more training as it rolls out a revised system.

DID FAA REVIEW MCAS?
Did the FAA review the MCAS before the 737 MAX was put into service?
A: FAA engineers and test pilots were involved in testing of the MCAS, which included 297 certification test flights, said acting FAA chief Daniel Elwell in written testimony to the Senate panel. The Justice Department and the Transportation Department inspector general are now looking into how Boeing and the FAA handled the 737 MAX certification.

WHEN WILL 737 MAX FLY AGAIN?
All 737 MAX planes are now grounded worldwide. When will they be allowed to go back into regular service?
It could take weeks or months, experts and airline officials have said. Regulators in China, Europe and Canada have indicated they will conduct their own tests of the revised MCAS, in addition to tests that will be conducted by the FAA.

WHAT`S AT STAKE?
What is at stake for Boeing?
The 737 MAX is a pillar of the company`s commercial airliner business. Since the Ethiopian Airlines crash, Boeing has stopped delivery of all new MAX jets and its shares have lost about 12 percent and $29 billion in market value.  Indonesian airline Garuda has asked to cancel orders for 49 MAX aircraft, citing passenger concerns about the plane, although analysts said the deal was already in question before the Ethiopian crash.

Other airlines have expressed confidence in Boeing, but the company is working to rebuild trust among customers, pilots and travellers that its planes are safe. The proposed changes to the MCAS software aim to do that in part by giving more control over the plane back to human pilots.

CONSEQUENCES FOR FAA
What are the consequences for the FAA, which has until now highlighted the benefits of a collaborative approach to oversight?
Some lawmakers, including Democratic U.S. Senator Richard Blumenthal, have criticized the FAA for being too cozy with Boeing, and zeroed in on the FAA`s use of Boeing employees to conduct certain safety assessments during the certification process.

That practice was authorized by Congress, and in 2018 Congress specifically instructed the agency to use outside contractors to speed up aircraft certification. On Tuesday, Transportation Department Inspector General Calvin Scovel said the FAA intends to significantly change its oversight approach by July.

For decades, the FAA set the global benchmark for aviation and aircraft safety. After the Ethiopia Airlines crash, China moved first to order the grounding of 737 MAX aircraft and other nations followed China`s lead. The FAA was the last major air safety regulator to order a halt to 737 MAX flights.

SHORTAGE OF PLANES? HIGHER TICKET PRICES?
What about travellers? Will there be a shortage of planes or higher ticket prices if the 737 MAX planes are not allowed to fly soon?
The 737 MAX only accounts for about 1 percent of global fleets, so the grounding is not expected to have a major impact on passenger fares, although it has forced airlines to cancel some flights. Southwest Airlines and American Airlines have the most 737 MAX aircraft among U.S. airlines, with 34 and 24, respectively. At American, the cancellations affected just 90 of about 6,700 daily departures. Some analysts have cut near-term profit forecasts for Southwest.