Exclusive: Cabinet to make strategic divestment announcement of this firm next week

The government is going for an open bidding process and it is optimistic of attracting a big players from international or domestic sector to make a bid for this shipping company at a premium price. 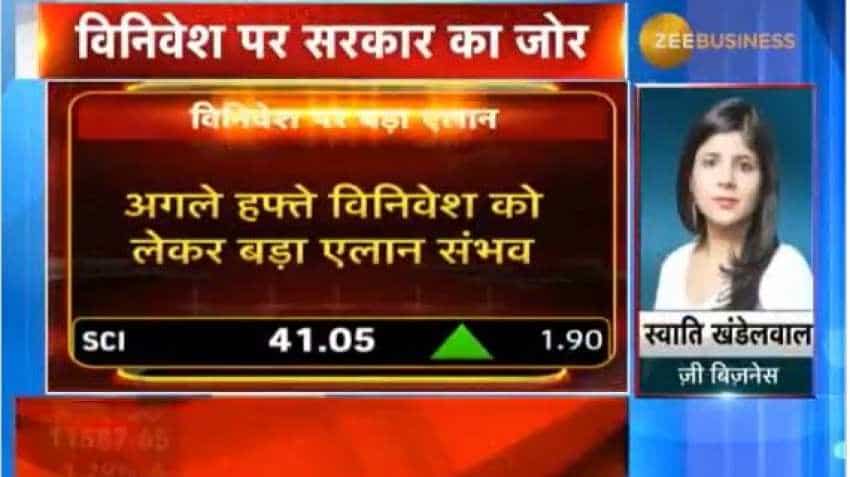 The BJP-led NDA government is likely to make big announcements on strategic divestment of public sector undertaking (PSUs) in the Cabinet meeting slated next week. In an exclusive report, Zee Business TV has revealed that the the Shipping Corporation of India (SCI) can be on the list. The report cited sources in the Union Shipping Ministry.

According to the report, the blueprint is ready for the strategic divestment of 3 to 5 companies, and of these SCI holds a great significance, and the official announcement can be made in the next week, precisely on October 3. The sources further told Zee Business TV that Union Shipping Minister is hopeful of having a better valuation for SCI, as he was not satisfied with current price.

The government is going for an open bidding process and it is optimistic of attracting a big players from international or domestic sector to make a bid for this shipping company at a premium price.

Currently, the SCI controls 1/3rd of the country's tonnage, and is stated to be having the cheapest shipping share in the world. In the last 4 years, the company has also managed to decrease its debt.

The company holds strategic value because the freight rates are expected to go higher in the coming days due to prevailing tensions in Middle East countries.

With strong parameters, the SCI has been placed with BPCL and Concor for the government's best bet for strategic divestment. The firm has 64% of the government stake, said the report, adding that in terms of value, the company has a fleet of 62 ships with a market cap of Rs 1680 cr.

Notably, SCI has been a lifeline for the country in times of emergency and distress, by ensuring continued and uninterrupted supply of crude oil, over the years. The government has conferred “Navratna” status to SCI on August 1, 2008, enhancing autonomy and delegation of powers to the company towards capital expenditure, formation of Joint Ventures, mergers, etc.

The SCI has all the ingredients needed for emerging as a truly world class international shipping company.