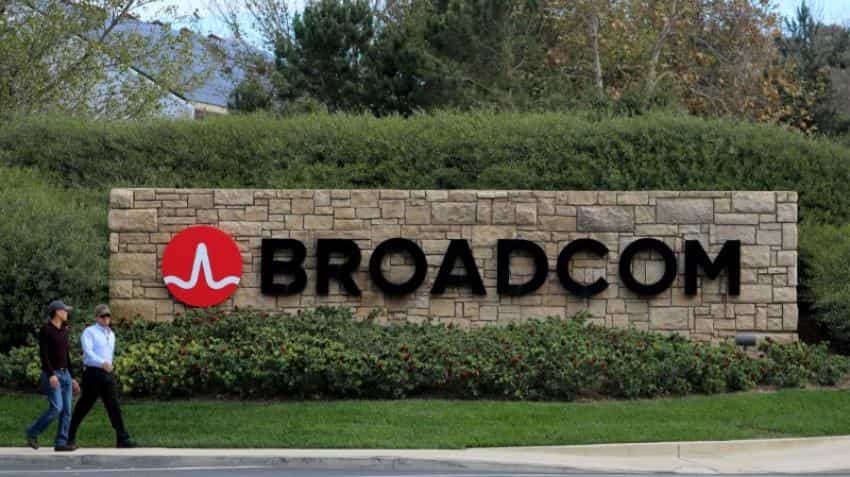 A sign to the campus offices of chip maker Broadcom Ltd, who announced on Monday an unsolicited bid to buy peer Qualcomm Inc for $103 billion, is shown in Irvine. Image Source: Reuters
Written By: Reuters
RELATED NEWS

Broadcom Ltd plans to unveil a new approximately $120 billion offer for Qualcomm Inc on Monday, aiming to ratchet up pressure on its U.S. semiconductor peer to engage in negotiations, people familiar with the matter said on Sunday.

The move comes ahead of a Qualcomm shareholder meeting scheduled for March 6, when Broadcom is seeking to replace Qualcomm`s board of directors by nominating its own slate for election.

Broadcom is scheduled to meet with its advisers later on Sunday to finalize an offer that values Qualcomm between $80 and $82 per share, two of the sources said. Broadcom`s previous $70 per share offer consisted of $60 per share in cash and $10 per share in stock.

Broadcom also plans to offer Qualcomm a higher-than-usual breakup fee in the event regulators thwart the deal, according to the sources. Typically, such break-up fees equate to approximately 3 percent to 4 percent of a deal`s size.

The sources cautioned that Broadcom Chief Executive Officer Hock Tan may decide to significantly change the terms at the last minute.

The sources asked not to be identified because the deliberations are confidential. Broadcom and Qualcomm did not immediately respond to requests for comment.

Broadcom has said it is very confident a deal can be completed within 12 months of signing an agreement. Qualcomm counters that the regulatory review processes required around the world would take more than 18 months and be fraught with risks.

Qualcomm provides chips to mobile carrier networks to deliver broadband and data, making it an attractive acquisition target for Broadcom, which hopes to expand its offerings in so-called 5G wireless technology.

Qualcomm has argued to its shareholders that Broadcom`s hostile bid is aimed at acquiring the company on the cheap.

Qualcomm reported quarterly profit and revenues last week that beat analysts` expectations as demand surged for its chips used in smartphones and cars. However, its forecast was below estimates due to tepid mobile phone sales in China.

Qualcomm is engaged in a patent infringement dispute with Apple Inc. Qualcomm has said the litigation is necessary in order to defend is licensing programs.

Qualcomm is also trying to clinch an acquisition of its own, proposing to buy NXP Semiconductors NV for $38 billion. The deal was approved by European Union antitrust regulators last month, and only China has yet to approve it. Qualcomm expects the government`s blessing later this month.

The NXP deal still faces an uncertain future as some of its shareholders, including activist hedge fund Elliott Management Corp, have asked Qualcomm to raise its offer. Qualcomm is expected to make a decision later this month.