The central government is likely to increase the gas prices by up to 70 percent from October 2021, Chetan Bhutani, said, adding that the news will be a game changer for oil and gas sector. 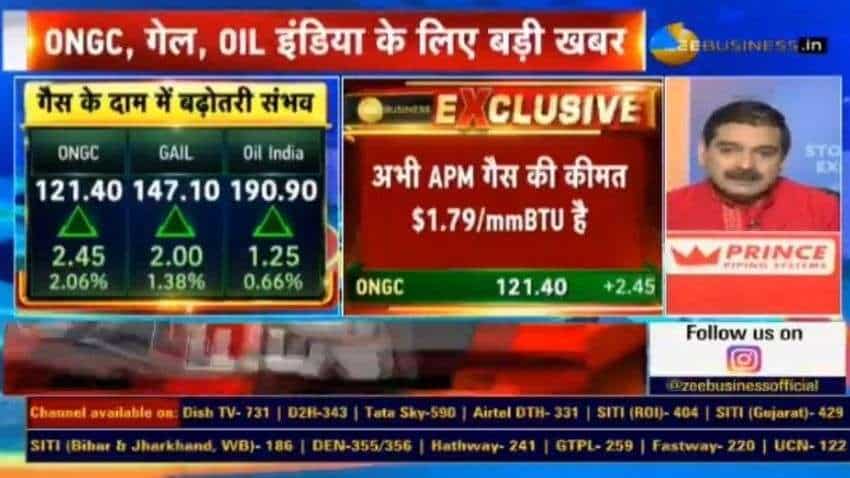 The central government is likely to increase the gas prices by up to 70 percent from October 2021.

Gas prices may be hiked substantially soon. In yet another Zee Business EXCLUSIVE, Chetan Bhutani, while speaking to Managing Editor Anil Singhvi, broke this big news on gas prices on Thursday.

The central government is likely to increase the gas prices by up to 70 percent from October 2021, Chetan said, adding that the news will be a game changer for oil and gas sector. He informed that the current APM gas price is USD 1.79 per mmBTU.

Chetan said that according to sources in the gas prices are expected to be hiked by up to 70 percent in the month of October as gas prices will get revised in the month.

He said that this news will benefit companies like Oil & Natural Gas Corporation Limited (ONGC), GAIL (India) Limited and Oil India Limited. As per the sources, on the increase of every USD1/mmBTU in gas prices, oil companies' profit will increase by 25-30 percent, Chetan added.

He further said that in April 2022 also a substantial hike can happen as per sources. Chetan said every year gas prices are revised two times that is in the month of April and October.

Explaining the development, Anil Singhvi said that the meaning of this news is very simple. For ONGC, its revenue will increase by up to 70 percent that means it will get a huge profit and its EPS can be seen jumping by 65-70 percent. While for companies like Oil India and GAIL also the news is expected to bring huge benefits, the market expert added.

He further said that the prices of natural gas have increased by 8 percent in the international market on Wednesday's session. So, the prices are increasing across the world.

Speaking on the same Market Analyst Sandeep Jain said the biggest beneficiary of this news will be PSUs and now the government may bring policies which will benefit the PSUs. Oil India, ONGC, GAIL were underperformers and hence the investors can stick to these stocks, he added.