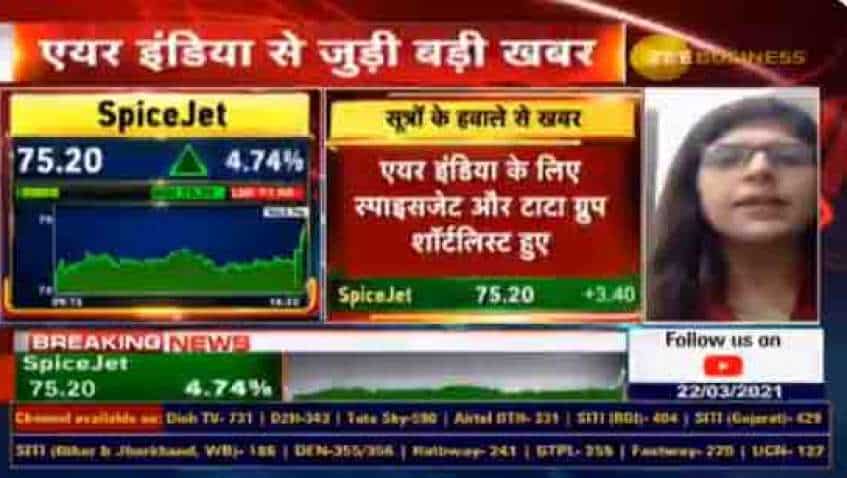 "Tata Group and SpiceJet had given their expression of interest, which have been accepted by the government, facilitating Air India acquisition process. Soon they will be given invitation for financial bids."
Reported By: ZeeBiz WebTeam
Written By: ZeeBiz WebTeam
Edited By: Harish Dugh
RELATED NEWS

In a big news for Air India disinvestment, the government has reportedly shortlisted Tata Group and SpiceJet for acquiring the state-owned public carrier. It is learnt that due diligence regarding Air India acquisition will begin in a few weeks.

In a chat with Zee Business Managing Editor Anil Singhvi, Executive Editor Swati Khandelwal revealed that only Tata Group and SpiceJet will go into next round of bidding. "Tata Group and SpiceJet had given their expression of interest, which have been accepted by the government, facilitating Air India acquisition process. Soon they will be given invitation for financial bids. Before that due diligence, which will begin in couple of weeks, will be taken care of. This process may take 2 to 3 months," said Swati Khandelwal.

watch detail coverage in the video below:

Air India debt has been the biggest hurdle in its acquisition and the government is trying to write off debt before handing over to private players to make it a profitable disinvestment exercise, she said. "This has been done to encourage good bidding process as we have seen in the past that private players had expressed their reluctance to acquire this state-owned public sector carrier due to debt issue. The government will try to ensure that it does not pass off the debt to private party," she added.

Anil Singhvi said one should keep an eye on SpiceJet and Tata Group as this will be one of the biggest acquisitions.