The existing electrical vehicle penetration and energy growth of the country have created a consensus that electrical vehicles (EVs) cannot distract the total demand in the immediate future or in the mid-future. 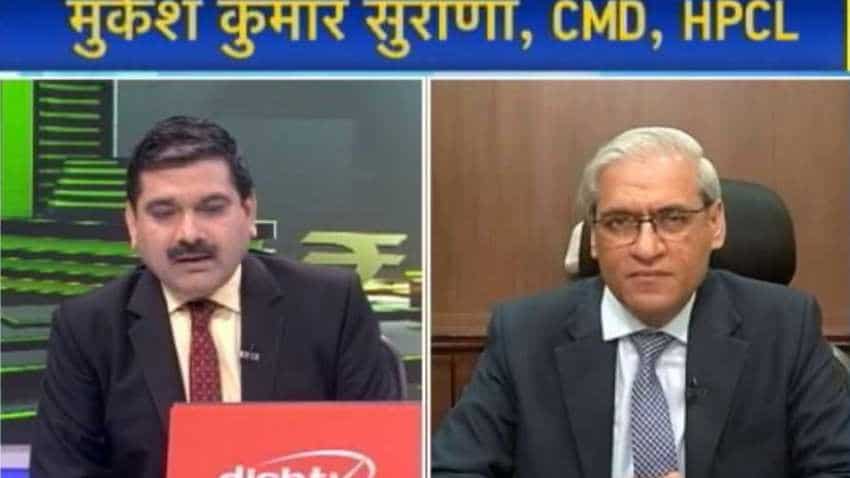 EVs are good - when seen from the environmental and pollution aspect – but it needs analysis in terms of convenience, infrastructure, cost and actual consumer experience. Image source: Zee Business
Written By: Jitesh Kumar Jha
Edited By: Manas Tiwari
RELATED NEWS

Mahindra Electric: Here is what this brand is doing to achieve its global ambition

Government’s focus on electric vehicles (EVs) is not a matter of concern as it will not have any impact on demand of petrol and diesel for next 10-15 years, says Mukesh Kumar Surana, Chairman & Managing Director, Hindustan Petroleum Corporation Limited (HPCL). During an exclusive interview with Anil Singhvi, Managing Editor, Zee Business, Mr Surana said petrol consumption has increased by 10% between April and June despite a slump in demand for vehicles. Edited Excerpts:

Do this budget have something for your company and the sector?
The Budget has increased the special additional excise duty and raised the road and infrastructure cess on petrol and diesel by 1 rupee per litre each. Thus, the cess has been increased by 2 rupees per litre and when VAT is included to it the price of the fuel, petrol and diesel will go up by 2.50. rupees per litre.

However, being a pass-on cost, it will hardly have any major impact on the company, till the prices are passed on to the consumers. Apart from this, the government has also announced some incentives on electrical vehicles like a reduction of GST rates and additional tax deduction on the interests paid on loans taken for the purchase of electric vehicles. This The endeavour will incentivise the electrical vehicles. Otherwise, the budget doesn’t have anything special for the oil and gas industry.

Do you think that the government’s push to electrical vehicles will have a negative impact on the sector in time to come?
The existing electrical vehicle penetration and energy growth of the country have created a consensus that electrical vehicles (EVs) cannot distract the total demand in the immediate future or in the mid-future. At most, it can take some percentage of the emerging incremental demand. The projected demand for petrol and diesel - for the next 10-15 years – suggest that there is ample requirement of these fuels in the country and that is why the refineries are being expanded.

Apart from this, EVs are good - when seen from the environmental and pollution aspect – but it needs analysis in terms of convenience, infrastructure, cost and actual consumer experience. The government is incentivising and trying to motivate people. But in the end, a consumer is the person who will decide what will work in the market and what will not. Policy intervention can be used to change their orientation, but things will depend on the market. So, several people and agencies have projected their demand. I can’t see any demand destruction threat for the oil companies in the next 10-15 years.

The auto sector is facing a slowdown and a negative growth has been seen in the past few months as the sales have gone down by 15-20%. Isn’t this scenario impacting your volumes and will not happen in the future as well?
The demand and sale of the vehicles of the auto industry have reduced from the past few days but the petrol consumption has increased by around 10% between April-June. While the auto companies register the sales of new cars, there is a huge number of existing cars in the country and our business consists of both, the existing vehicles as well as the new vehicles and they are consuming petrol and diesel.

Secondly, it also depends on the increased use of vehicles by existing customers.  Besides, in the past, a family member owned and drove a single car while today every member of the family including ladies and children are driving a car and this is leading to the increased use of the vehicle.

Growth in the number of cities is not only increasing distances but also putting pressure on public transport – the increasing population is also a cause – and this has led to higher use of vehicles by individuals. Today, even teenagers are using bikes for going to their colleges contrary to the teenagers of the past who used cycles as the mode of transportation and nobody uses a cycle today. The total outgoing has increased as people are using their personal vehicles for moving from one city to another and it has turned out to be the first mode of transport. Thus, there is an increase in consumption.

There is an increase in the number of people who are driving their own vehicles and their total consumption pattern, and the upward mobility has also increased while the middle class is moving towards being upper middle class and the upper-middle class is moving forward. India is now becoming the world’s third-largest consuming country with an aim to cater to this increased demand. On the most conservative basis, the demand is projected to increase to 320-325 million metric tons and the current production rate in the country is 220 million tons.

Various modes are required to cater to this increased demand which includes electrical vehicles (EVs) and its penetration will take some time as well as it will also take a per cent of the incremental demand. I doubt it will destruct the existing demand and the demand for fossil fuels will increase.
The convenience, infrastructure and the Indian mental make-up does not encourage throwing away the current vehicle and buying a new one. Secondly, there is a metro-centric view where there is a narration about pollution and increased traffic but there is a presence of an inter-signed country. Allowing the expansion of EVs with the help of policy decisions in a metro can turn out to be quite easy but I doubt the immediate conversion to EVs across the country, sector and the board. Electrical vehicles should surface, must also be incentivised and as of the present scenario, I doubt they’ll replace fossil fuels vehicles in this narration.

The Euro norms are changing for fossil fuel vehicles as the BS6 vehicles are environment-friendly. But, they will need infrastructural support to develop them and there are concerns related to the availability of lithium that is used in the batteries and its disposal. This thing will work out on a totality basis. The penetration of EV’s will happen but it will take some time.

There is a trend of weakness in the gross refinery margins. What kind of GRMs should be expected for remaining fiscal year?
In the past few days, the petrol cracks were quite weak which led to a decline in refinery gross margins and the diesel pegs were modest while that of the other products were lesser. We will approach towards the IMO and there are chances of improving the diesel cracks post-September which may lead to an improved refinery GRM.  The petrol cracks that were reduced have also increased a bit, but diesel cracks will improve which can lead to an increase in refinery margins in the second half of the year as in the Indian system, diesel is the largest component of refinery products.

Mahindra Electric: Here is what this brand is doing to achieve its global ambition