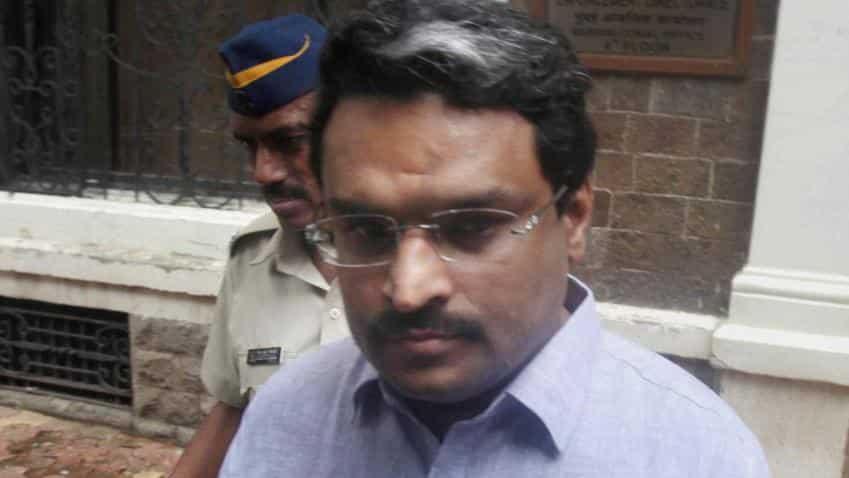 Jignesh Shah, founder and former chairman of Financial Technologies (India) Ltd (FTIL) is produced at a court by ED officials in Mumbai on Wednesday. Photo: PTI

The Enforcement Directorate (ED) on Monday arrested Shah under section 19 of Prevention of Money Laundering Act (PMLA), saying he was not cooperating with the ongoing investigation.

The PMLA court, while remanding Shah in ED custody, rejected his plea for interim bail.

His sustained interrogation was required to unearth the trail of syphoned off funds, Venegaonkar said, adding ED needed his custody to confront him with other accused and suspects who had indicated they were acting as per his directions.

Being an influential person, Shah could influence other witnesses and tamper with evidence if he was allowed to remain at large, the ED lawyer said.
Shah had been named in the first charge sheet filed by ED in the case last year.

Venegaonkar argued that new material had come to light indicating that Shah indulged in money laundering. Therefore, ED wanted to file a fresh complaint of money laundering for which it needed his custody for eight days, he said.

According to ED, Shah was the main architect of the money laundering activities related to the scam. He created subsidiaries to route the proceeds of the crime in a conscious efforts to make illicit gains and project them as untainted, it says.

The ED lawyer further said Shah appeared to be the brain behind these multi-layered transactions. He was controlling the entities involved in these transactions. Instead of cooperating with investigators, he maintained silence about the dubious and interlinked financial transactions in respect of the companies controlled by him, the ED lawyer argued.

Shah's lawyer Abad Ponda opposed the plea for custody, saying he had been earlier arrested in the NSEL case and later granted bail. The investigation was over and the facts which may have come to light are not new.

Shah had spent more than 100 days in custody and was granted bail by the high court, Ponda pointed out.

However, the ED lawyer said Shah did not answer several questions during the interrogation and the investigation officer stopped questioning him. For further probe, his custodial interrogation was necessary.

Ponda cited a Supreme Court judgement saying that a suspect cannot be compelled to answer questions which may incriminate him or her.

The defence lawyer also argued that there was a pending complaint before this court and ED had no power to file a second complaint; a second complaint can be filed only when the first complaint is dismissed, that too in some exceptional circumstances, Ponda argued.

As a consequence, ED can't arrest him for further investigation, he said.

The agency registered a case in the NSEL scam under the PMLA in 2013 along with the Economic Offences Wing of Mumbai police.

ED filed a 20,000-page charge sheet against NSEL and 67 others in the court here in March 2015. According to the charge sheet, NSEL funds were laundered and "illegally ploughed into purchase of private properties".

Watch top 5 stories of this night; From Jignesh Shah in ED's custody to APMC traders calling off strike