The continued focus of major players on existing business segments such as apparel and fashion will drive growth, a report said 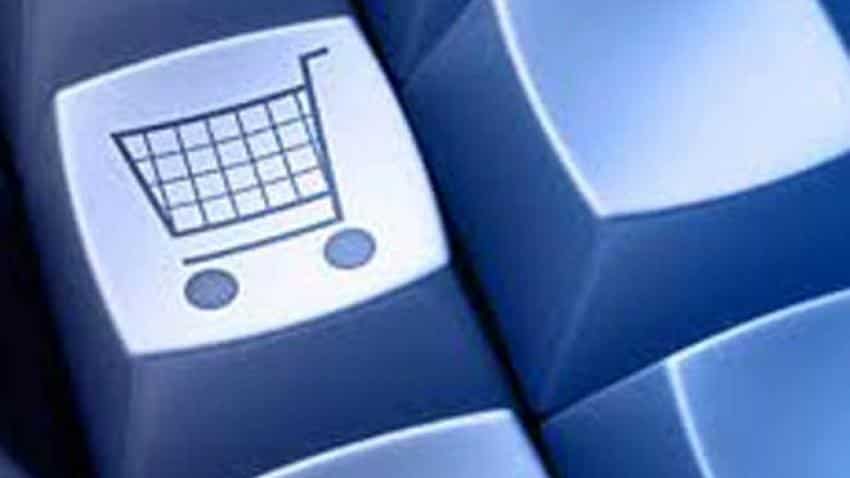 Despite growing at a breakneck speed, e-retail accounted for a mere 1.5% of the total retail sales in the last financial year. Image source: Reuters
Written By: ZeeBiz WebTeam
RELATED NEWS

Over the next 3 years, e-retail industry is expected to continue its strong run, growing over 2.5 times to Rs 1.8 trillion by financial year 2020, a report said.

Apart from grocery -- billed to grow the fastest among all segments and increase its share in the pie – the continued focus of major players on existing business segments such as apparel and fashion will drive growth, the report stated.

The e-retail sector’s market size tripled over the past 3 fiscals on rising internet penetration, increasing awareness of online shopping, and lucrative deals and discounts. 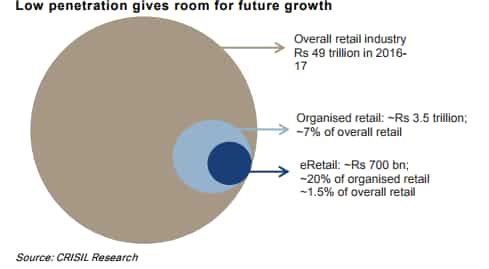 Despite growing at a breakneck speed, e-retail accounted for a mere 1.5% of the total retail sales (organised and unorganised) last financial year, indicating its enormous growth potential, a Crisil report said.

However, after the initial phase where e-retailers focussed only on gaining market share through discounts, the next phase will be characterised by consolidation, geographical diversification, business realignment, as well as enhancing customer stickiness.

A frenzied search for unicorns in the past couple of years ended badly for many investors, who saw their equity wiped out. So much so, about 26 prominent startups have shuttered in the past two years, it said.

Chastened investors are now putting money into just a handful of players that are showing sustainability and enjoy a major market share.

While overall funding increased by more than Rs 25,000 crore in first nine months of FY2018 as compared to entire fiscal 2017, the number of players funded reduced by ~30%, underscoring the caution and sharper focus after the losses.

An analysis of 11 major e-retail companies shows that almost 45% of the over Rs 40,000 crore invested between fiscals 2014 and 2016 was wiped off due to losses at e-retailers.

The trend indicates cautious and focused investing by investors with an eye on profitability. The industry is now 8-10 years old and is moving from the initial, startup phase to a more consolidated phase. Going forward, funding will only get more concentrated with big ticket players getting the bulk of the pie. Players in niche segments will get funding, but in bits and pieces. 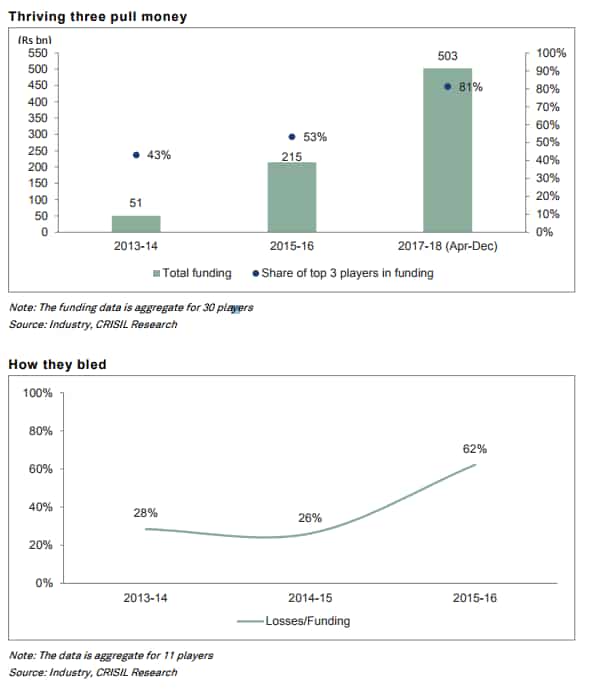 With increase in funding, the larger players have been exploring new segments to enter, apart from growing their existing business. One major segment that has caught the attention of all big players is food & grocery, which has seen significant investment this fiscal.

Food and grocery to be the next big online segment after apparel, mobile phones

The online grocery segment, which had a handful of players two years back, has lately seen an uptick in the number of players as well as investor interest.

In the overall food retail industry, the penetration of online food and grocery (F&G) segment stands at a miniscule 0.1%, indicating significant growth potential.

Investments in the high-volume, low-margin segment increased by over 7 times in first nine months of fiscal 2018 to Rs 20 billion, from Rs 3 billion in FY2017, what with major players such as BigBasket and Grofers, as well as new entrants such as Amazon, Flipkart, D-Mart, and Reliance sharpening focus on it.

We expect online grocery to be fastest-growing segment (65-70% CAGR between fiscals 2017 and 2020) in e-retail and almost quadruple over the next 3 years to ~Rs 100 billion in terms of revenues. Investments in technology, new strategies adopted by players such as introducing private labels, same day and next day delivery, and B2B food services, would all aid growth of the sector.

Apart from entering new segments, a major focus area for e-retail players to ensure continued robust growth will be geographical diversification in revenue, currently skewed towards a few major cities.

Although e-retail accounted for 20% of the overall organised retail market in fiscal 2017, its customer base remained largely concentrated in major cities.

Online shopping activity has not been broad-based, with the top 10-15 cities still accounting for over 75%
of total sales.

Smaller ticket size and logistical complexity have restricted growth of e-retailers in Tier-II, Tier-III cites, and beyond. 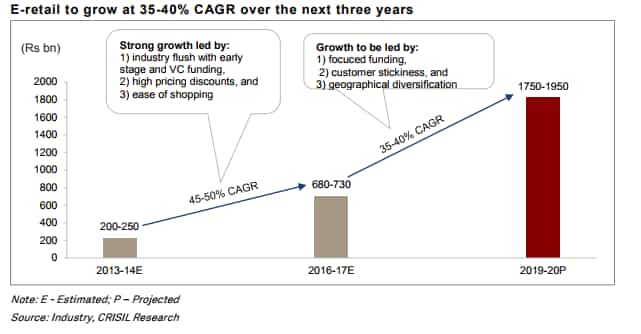 However, growth will slow down in the top cities as it is already highly penetrated and players need to move to the next level of Tier-II and Tier-III cities to sustain growth. Though some top players have entered these markets, a lot needs to be done to penetrate deeper. Although, growth will come from increasing ticket size in the top 10-15 cities, volume growth needs to come from smaller ones.

The focus of e-retail companies will be on increasing customer stickiness in top cities even as they expand reach beyond these markets. Cashback offers, fast delivery, flexible return policy and low delivery charges on subscription  model are being used to ensure customer stickiness. Going forward, industry growth will be driven not only by discounts, but also by the online experience and convenience.

Over the next 3 years, e-retail industry is expected to continue its strong run, growing over 2.5 times to ~Rs 1.8 trillion by fiscal 2020. 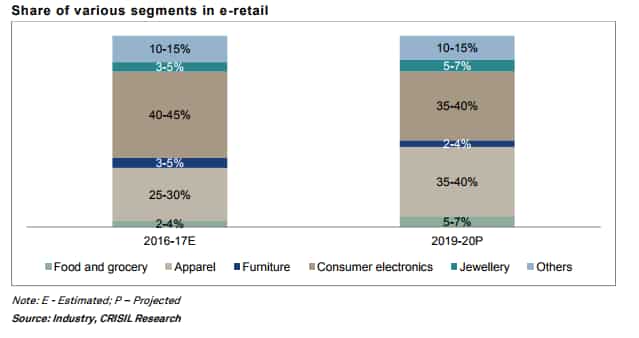