GST adversely affected the market this quarter as it created confusion due to the lack of awareness about the changes needed. The reason for this fall in smartphone shipments is due to the confusion over the goods and service tax (GST) and lack of awareness about the changes that are needed. 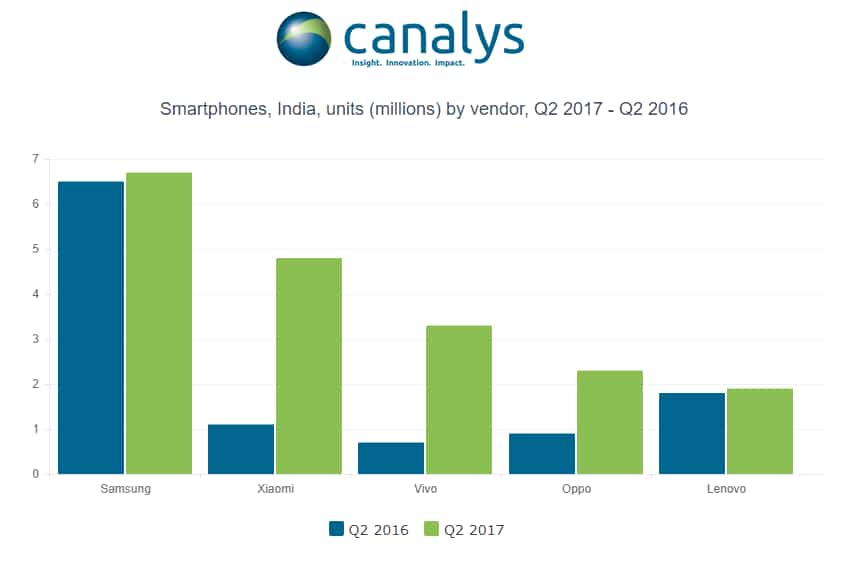 The GST, applicable in India from July 1, 2017 across all products and services, has adversely affected the market this quarter, said the report

“There is general confusion in the entire market over GST and a lack of awareness about the changes that are needed. Apprehension among distributors and retailers regarding the impact on prices has caused the market to adopt a wait-and-see policy. The market will emerge stronger post-GST. Vendors can look forward to leaner distribution, faster delivery and increased demand from local retailers and distributors,” said Canalys Analyst Rushabh Doshi.

Despite this Chinese smartphone makers Xiaomi, Vivo and Oppo posted their best performances to date in the country.

Samsung continues to lead the market, with a 25% share, followed by Xiaomi, which more than quadrupled its shipments to 4.8 million units this quarter. Samsung had seen a smaller growth in smartphone shipments from the same quarter last month.

Canalys Research Analyst Ishan Dutt said, “With China suffering its own decline this quarter, India is a market of huge strategic importance to Chinese smartphone vendors. Samsung is under immense pressure in the mid-tier from the Chinese players. For now, its low-end J Series is helping it sustain its lead and maintain share. But it needs to use its brand to make its mid-tier devices more desirable. The recently launched S8 and S8+ have helped it win back some of its premium share. It now needs to generate a halo affect around these products in the mid-tier to counteract the threat from China.”