Ramesh S Singh, Executive Director, Dena Bank, in an exclusive interview with Zee Business, said, "in absence of the provision of issuing fresh loans, the bank has shifted its focus on recovery". 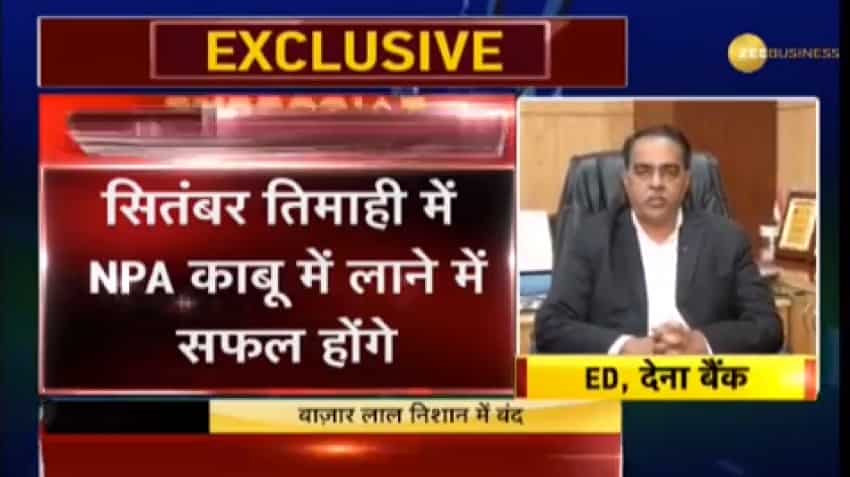 Ramesh S Singh said "I feel that this effort will help us to bring NPA accounts under our control and reduce our losses. In addition, we will be able to post profit results by the first quarter of the financial year 2019-20." Image source: Zee Business
Written By: ZeeBiz WebTeam
RELATED NEWS

Ramesh S Singh, Executive Director, Dena Bank, in an exclusive interview with Anurag Shah, Zee Business, said, "in absence of the provision of issuing fresh loans, the bank has shifted its focus on recovery". Here are the edited excerpts:

Q: The bank's last quarter results reported a decrease in its losses from Rs 1,200 crore to about Rs 700 crore, but its NPA situation remained at 22 per cent levels. Now, I would like to know about the steps being taken by the bank so that it can post positive results? What is your opinion on the recovery of the bank?
A: Restrictions imposed on the bank from issuing any fresh loan, which was imposed by the Reserve Bank of India in May, is one of the reasons that our NPA stood at the levels of 22 per cent, because the restrictions didn't allow us to increase the bracket of loans on our part. When it comes to our profitability, then you have seen that our book of losses came down from Rs 1200 crore to Rs 726 crore and we are working to reduce it in the ongoing quarter that will end in September 2018. For that purpose, our entire team from across India, which is free from the work of increasing loan accounts, is completely engaged in recovery work. And I feel that this effort will help us to bring NPA accounts under our control and reduce our losses. In addition, we will be able to post profit results by the first quarter of the financial year 2019-20.

Q: Dena Bank is one of the banks from a list of 11 banks, which are under the PCA of the Reserve Bank of India due to their weak financials. It is facing the toughest restrictions and the bank has been stopped from issuing any fresh loan. Under such circumstances, I would like to know about the steps the bank is taking to convince the regulator, RBI, to modify its order and loosen its restrictions a bit?
A: It is true that we were saddened after receiving RBI's letter on May 8, 2018, stating that the bank is being stopped from sanctioning any fresh loan and hire new personnel. The letter also brought pressure on the bank including employees that what is the reason for such direction at a time when we are in a better situation (under certain conditions especially capital adequacy) from few other banks, whose names are mentioned in the list. But it was the regulator's analysis about the bank and it would have been made on the basis on the analysis of provisioning of our remaining NPAs or may be on the basis of the analysis of fresh provisioning which was scheduled to happen in future. The exclusive restrictions which were imposed on Dena Bank forced the management that sits over here to think that it would hamper our business. We were afraid that the decision may lead to run on deposits in the bank. Efforts of our team, employees, officers, branches and top management worked hard to retain our customer base. This effort helped us to protect our account holders, who would have been poached by the competitors.

Q: But how do you convince customers of the bank as they would come up with several questions while their visits to the branches?
A: I agree with the point and we also faced problems in initial days after the directions were issued in the month of May but our branches managed to make our customers, existing and the new ones, understand that it is a temporary problem and is likely to come to an end in next 3-6 months and we will be able to assist them in the best possible way after the restrictions are removed.
When it comes to your question that what we are doing when we are restricted from issuing fresh loans than I would like to inform you that our entire team is engaged in reducing the NPAs of the bank and recovery. Five general managers of the bank are completely engaged in the work of recovery of which 4 are exclusively engaged in recovery work and the fifth is engaged in stake assessment. Their main work is to communicate with respective branches and customers and convince them to go for a one-time settlement scheme, Dena Rin Mukti scheme of the bank, so that they can close their account at the earliest and help the bank in its recovery work.

Q: I would like to know about the capital requirement of the bank and had it asked for a certain help from the government?
A: We need capital support to meet the minimum capital requirement mentioned under BASEL 3 norms and we have asked for a support of Rs 2000 crore from the government. The demand is based on the assessment of provisioning of fresh NPA accounts of the bank, which was made after seeing the June quarter results of the bank. Apart from this, we are trying to raise a capital of near Rs 500 crore by selling our non-core assets, which includes some strategic sales like shares of NSDL, NSD e-governance and SIDBI, rest shares are related to the bank's non-core activities. Interestingly, the process has been started after getting an approval from the board.

Q: Do this non-core asset, which will be sold to raise Rs 500 crore, will also include the real estate assets of the bank, if yes, then can you tell us about the geography where such sales will be practised? Do this sale also includes the real estate properties where the bank has its branches?

A: You are right, we will be raising about Rs 200 crore by selling the shares and the rest Rs 300 crore will be raised by selling the real estate properties of the bank. Maximum of those assets are located in Mumbai and the selling of these assets will hardly have any impact on our business. We will be building new assets soon after the situation of the bank comes to a normal.

Q: Can you let us know about the capital that was raised after resolution work on two accounts was completed? Can you tell us about your expectations related to capital that the bank would raise by end of the ongoing quarter?
A: The two accounts helped us to raise about Rs 400-450 crore. In fact, we raised Rs 374 crore from Bhushan Steel and Rs 90 crore from the resolution of Electrosteel. Resolution of these two accounts helped us in reducing our gross advancement and gross NPAs. I am hopeful that the resolution work of at least 2-4 accounts, like Ruchi Soya, will be completed by September 2018.

Q: Deadline of 12 February circular released by RBI is about to complete and under such situation, I would like to know about the number of cases that have been resolved in this period and the percentage of accounts that will move to NCLT?
A: The circular requires banks to finalise a resolution plan in case of a default on large accounts of Rs 2,000 crore and above but Dena Bank had few accounts, nearly 7-8 accounts, with a complete involvement of Rs 800-900 crores. When it comes to resolution than we have few standard accounts in the list and thus we don't have any problem related to it. Power sector accounts are having an impact on it but luckily we have just 1-2 power accounts in our list.

Q: As you said that you have two accounts associated with the power sector but there is a case related to the sector in the Allahabad Court and the court's decision is pending yet. What if the decision is not made in favour of the circular, will the banks will have to go for a re-provisioning of the accounts related to the power sector?
A: They are a standard asset and if the court's decision goes against the RBI guidelines then those accounts will be sent to NCLT, which means the bank will have to re-provision the accounts. But this re-provisioning will not have a major impact on us because we have a very small portfolio in the sector and both of them stands below Rs 100 crore each.

Q: Can you tell us about sector wise exposure of the bank?
A: See, 40 per cent of our loan portfolio belongs to private sector lending and the corporate sector related lending, which once stood near 55-56 per cent, has gone down to 44-45 per cent. In addition, we have a strategy to move out from the corporate loan sector to MSME sector, whenever the regulator allows us to restart the process of providing loans. Our strategy is backed by the geography, like Maharashtra, Gujarat and Chhattisgarh, where we have maximum branches.

Q: Earlier, the government directed the banks to have the passport details of account holders whose loan portfolio was bigger then Rs 50 crore, so that they may not run away from the country after defaulting the loans. Can you let us know about the precautions undertaken by Dena Bank and also does it have the details of all such portfolio holders?
A: Yes, the government has directed us to have the passport details of the directors of all such account holders and we have complied with the orders and have collected the passport details of such account holders. Apart from this, we have also directed our department to be prepared and have a check on such accounts and try to find out the possibilities/probabilities of frauds and have already declared 16-17 such accounts as frauds. In fact, you would have read the government's secretaries direction to the bank where he has asked the banks to have a tab on such accounts and report them to the concerned department.

Q: In the recent past, there were reports of a coordinated digital attack on accounts of Pune-based Cosmos Bank under which large nearly Rs 100 crore were fraudulently withdrawn using several cloned debit cards. Such incidences pull away from the confidence of customers from digital banking. In the same line, I would like to know about the precautionary measures that the bank will be taking to tighten its security layers?
A: Cosmos bank episode is a matter to worry. But I would like to thank the Reserve Bank for issuing an advisory some 15 days back informing the banks that such event of hacking is likely to happen. Secondly, we have a security layer at our bank under which a hacker can not go beyond a level and have also directed our security chief officer to go for a more precautionary mechanism to avoid and protect our customers from such events.