Country's second-largest mutual fund firm by assets HDFC Asset Management Company (AMC) will launch its initial public offer IPO on July 25 at a price band of Rs 1,095 to 11,00 per share. The IPO will open for subscription by anchor investors on July 24, 2018.  Here are the edited excerpts from the interview: 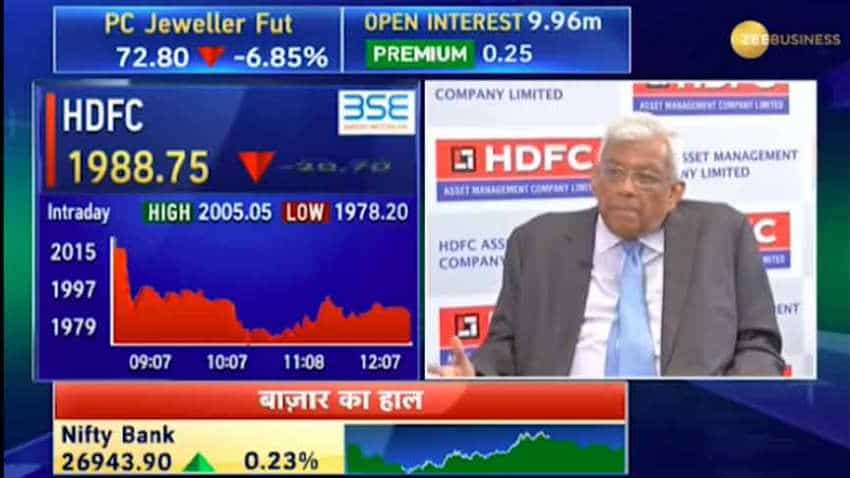 Deepak Parekh feels it is a perfect time to launch IPO in the absence of alternate investment opportunities.
Written By: ZeeBiz WebTeam
RELATED NEWS

Deepak Parekh, Chairman, HDFC, and Milind Barve, Managing Director, HDFC Asset Management Company, in an exclusive interview with Zee Business's Anurag Shah, informed about the reason behind the launch of the initial public offering (IPO) of HDFC AMC and the reason for valuation of the shares.

Country's second-largest mutual fund firm by assets HDFC Asset Management Company (AMC) will launch its initial public offer IPO on July 25 at a price band of Rs 1,095 to 11,00 per share. The IPO will open for subscription by anchor investors on July 24, 2018.  Here are the edited excerpts from the interview:

Q: The year has been volatile for the market and bullish for the financial sector especially the mutual fund industry. Can you let us know the reason that made you choose the year to go ahead with IPO? What is the thing that is boosting your confidence?

Deepak Parekh: Several things are there to boost confidence. I feel it is a perfect time to launch it at least in the absence of alternate investment opportunities and people are looking forward to investing their savings, which have gone up due to an increase in disposable income and number of middle-class families.

Earlier, gold was the preferred area of investment but no longer is it an option for investment because the last 5-year returns the metal generated have gone down - they saw a growth of just 1 per cent per year. This lack of returns on investments has forced them to move away and look forward to other areas of investment. Currently, gold is being bought by the actual users.

Real estate was the second option to invest but the sector has also seen appreciation and the rental yields have come down. The returns in the sector have also gone down from 10 per cent to 2 per cent. Bank deposit rates have come down and post demonetisation, we saw the movement of money towards the mutual fund industry, which helped in establishing a mutual fund vehicle. Secondly, the mutual fund penetration in India stands at 13 per cent, which is to low when compared to the global numbers that stand near 62 per cent. Its penetration is China stands at 39 per cent. Thus, there are scopes of growth in the Indian mutual fund industry.

Q: The valuation of the IPO is being termed too expensive. Can you let us know about the process that was adopted to decide the valuation? In addition, have you settled the issue related to pre-IPO placement and have returned the money that was collected from these advisers and distributors?

Milind Barve: Generally, IPO valuation is reached in two ways. In the first approach, we went ahead with roadshows, where we met both international and domestic investors and got feedback from them. Secondly, our merchant banks also advised on the issue of IPO valuation. But the final decision was taken by the board of the company. I think the valuation was decided after considering almost every factor. The valuation is quite less than it was reported in newspapers. It has been kept low to make it attractive for the investors, reasonable and conservative.

Now, let's talk about the private placement that we did with distributors and employees of our group and we were asked by the market regulator, SEBI, to return the money that was collected from them. On that front, we managed to transfer the shares that were allotted to the distributors to the KSK group, an entity that was interested in buying those shares.

Q: You were talking about the absence of investment opportunities, which has made people think about mutual funds. Don't you feel that there is a risk in the market for the investors at least in the backdrop of the momentum of 2017 and volatility during the year?

Deepak Parekh: Risk factor always lies in the equity market. So, people should have a long-term view while investing in the equity market and not of a year or two. Longer view helps in mitigating the risk and can provide an average return in 5 years. Equities are not fruitful for short term but can yield good returns in the long term.

Q: What is the risk in the short term in the time to come if we talk about the domestic market?

Milind Barve: In the case of India, the short term is out of its control at present due to crude prices and strengthening of the dollar. The first risk is related to crude prices, which is not controlled by India. Variation in its prices will have an impact on the short-term market of the country. The second risk is related to the strengthening of the value of the dollar, which has depreciated the value of the rupee by 7 per cent in past 6 months. In addition, US interest rates, which are on the rise, are also a matter of concern for India.

Q: Do you think that the reduction of total expense ratio (TER) by SEBI will bring down the margins of the company?

Q: HDFC group is the second largest company in India with a 10 trillion market cap. Can you inform us about the future plans of the company at the group level and also about the succession plan? In addition, I would also like to ask about the companies that will be listed in near future?

Deepak Parekh: There are two companies that will be listed in near future and they are HDFC ERGO and HDFC Credila. HDFC ERGO is a non-life company, while Credila is an education loan company of HDFC. They will be listed after their assets increase to a level where they can be listed. We believe that every company should be listed as it helps in making it transparent and inform investors about the value of the company.

All the five companies are aware that we are getting old and we have to find a replacement and work on the same is on. There will be a smooth transition, no need to worry.