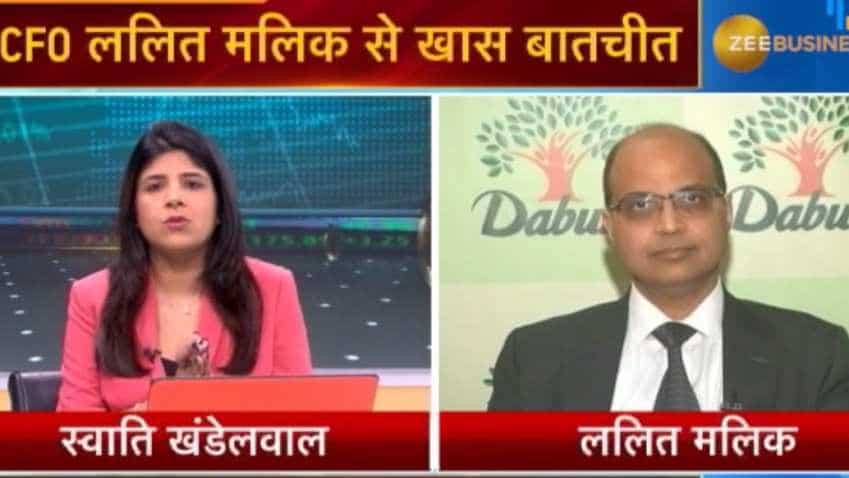 All you need to know about Dabur results, including dividend payout - stock under upgrade-watch from brokerages

Lalit Malik, Chief Financial Officer, Dabur India Limited, talks about September quarter performance of the company and competition that Dabur is facing in the beverage segment among others during an interview with Swati Khandelwal, Zee Business. Edited excerpts:

Name the segments that have contributed to the growth in the September quarter?
Dabur India's revenue at a consolidated level has grown by 4.1% in the quarter while PAT grew by almost 7%. Our margins (consolidated and standalone) have increased because our raw materials have remained deflationary. Apart from this, other costs like employee cost and other expenses were kept under control although investments were made wherever there was a need. When it comes to our overall revenue than we have witnessed a suppressed market sentiment in India and have faced a liquidity crunch situation. As well as, the market scenario has remained down in the period, but we increased our market share in almost every category. As far as the international market is concerned, we have grown by almost 7-8% except in two SAARC countries namely Nepal and Bangladesh, where we faced certain regulatory issues at our end. But, when it comes to the Middle East and North Africa (MENA) region than we have seen good growth in the international market as well.

Let's talk about the beverage segment and its performance. Do you feel that the segment is facing more competition, if yes, then what is your outlook on it?
The market for the food sector and juices has declined in the quarter, but, our market share has gone up by almost 300bps. As far as market share is concerned then we are the market leaders in the juice category and our market share has gone up in the segment. But, the overall consumption of juice and nectar has declined in the market. Possibly, the entry of new players in the juice segment can be a reason for this decline. As far as our juices are concerned then we have gained good market share in the segment. We have also launched new products like fruit ORS in the North East, which has got a good response. We have launched Masala flavoured juice and it has also gained a market share. Similarly, there is an increase in the market share for the coconut water that we have been selling for the last few years. Thus, all these things have helped us in garnering a good growth in the market share in the juice sector but when compared to the last year then we have seen a 5% decline in India.

All you need to know about Dabur results, including dividend payout - stock under upgrade-watch from brokerages