Facebook launched its online video platform Watch which will have content creators putting up new show and will enable people to catch up with their latest shows. 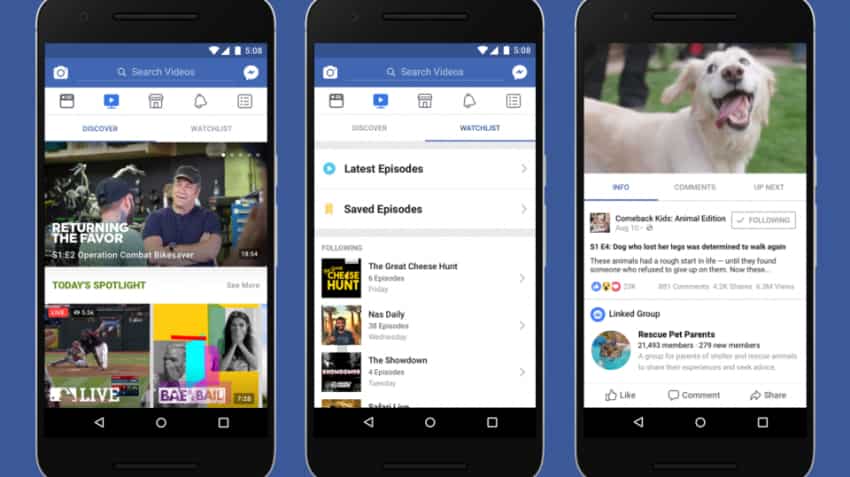 Facebook on Wednesday made its first move into the video on demand (VOD) or over the top (OTT) content space by introducing its latest platform Watch. The social media giant said that they were introducing Watch which will make it even easier to catch up with shows the people love.

Facebook had made it clear earlier that it was looking to enter into the OTT space which has been a place dominated by the likes of Netflix and Amazon Prime Video. Even Google in March launched YouTube TV in order for them to not lose their place in the video content creator environment.

Facebook says it will also help people keep up with their shows they follow as the platform has a Watchlist so that people never miss out on the latest episodes.

“Watch is personalised to help you discover new shows, organised around what your friends and communities are watching. For example, you will find sections like “Most Talked About,” which highlights shows that spark conversation, “What’s Making People Laugh,” which includes shows where many people have used the “Haha” reaction, and “What Friends Are Watching,” which helps you connect with friends about shows they too are following,” Daniel Danker, Director of Product, Facebook said in the statement.

While these categories of shows are similar to even what is offered by Netflix or Amazon Prime Video, the social media site will get more insights into the most talked about shows or other reactions to shows from people's Facebook pages. In this way the categories that the shows will be placed in will be more precise into the reactions people watching them have.

Besides this, the Watch platform of Facebook will however be more like YouTube in terms of its content creator universe and revenue model, as it calls for all creators and publishers to find an audience, build a community of fans, and earn money for their work.

Even the shows on Watch currently are more community based or how-to videos like on YouTube instead of large budget fiction shows such as on Netflix or Amazon Prime Video.

Some of the shows it has introduced on Watch include Nas Daily publishes a daily show where he makes videos together with his fans from around the world; Gabby Bernstein, a New York Times bestselling author, motivational speaker, and life coach, uses a combination of recorded and live episodes to connect with her fans; Tastemade’s Kitchen Little is a funny show about kids who watch a how-to video of a recipe, then instruct professional chefs on how to make it; and Major League Baseball is broadcasting a game a week on Facebook.

However, it will not be long before Facebook also makes an entry into VOD series shows as it has been dropping hints for months that it wanted to become a source of original and well-produced videos, rather than just shows made by users.

Reuters reported in May that Facebook had signed deals with millennial-focused news and entertainment creators Vox Media, BuzzFeed, ATTN, Group Nine Media and others to produce shows, both scripted and unscripted.

Facebook said the shows would include videos of the Women's National Basketball Association, a parenting show from Time Inc and a safari show from National Geographic.

While Facebook's Watch has not launched in India yet, it can be expected to come to the country soon being one of its biggest markets. Besides this, the competition in the VOD space has been growing significantly with international players such as Netflix and Amazon Prime Video setting shop in India last year.