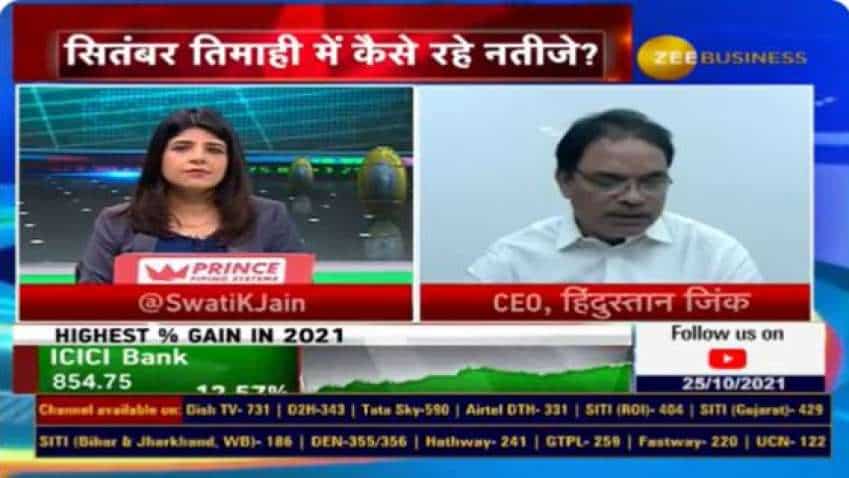 HZL, which is also the biggest producer of silver in India produced 152 tn during the quarter which is lower from the Q1 quarter by almost 5 per cent

The margins were up at 54 per cent.

The Q2 quarter production was 4 million tn which was up by 10 per cent sequentially, despite this being a monsoon quarter with high humidity and temperature challenges, the CEO said. The company managed to create requisite infrastructure at the right time. Covid-19 related disruptions were temporary setbacks, and the company would have done even better in the absence of these, he added.

He assured that the company will be able to meet its production over the next two quarters which will in line with the guidance given by HZL.

HZL, which is also the biggest producer of silver in India produced 152 tn during the quarter which is lower from the Q1 quarter by almost 5 per cent. This is down by almost 25 per cent from the last year, Mishra said. The grade of silver being mined currently is low. The production is likely to improve over the third quarter as the company will be mining from a different place.

There are no structural issues in the mining of silver, he further said.

The company accounts for 10-12 per cent of the domestic consumption while the rest is imported.

Indian silver accounts for 60-70 per cent for the jewellery segment while almost 30 per cent goes to industrial production.

India’s thrust on green energy will be a key driver for the solar panel segment which could go up to 50 per cent. He said that the outlook is positive.

While the metal market follows a cyclic trend, the spike this time is triggered by some event, Mishra said. Among major ones, the price increase in coal, China’s push on reducing emissions.

He did not see these as sustainable events. The company has its focus on producing volumes over the next two quarters, he further said. Any upside in price on the London Metal Exchange (LME) will only be a Diwali bonus for the company, Mishra said.