In an exclusive chat with Swati Khandelwal, Zee Business, the MD & CEO of Mahindra Lifespace Developers Ltd., Sangeeta Prasad, said that the new norms say that revenue and profits of the completed projects can only be compiled in the financial statements. 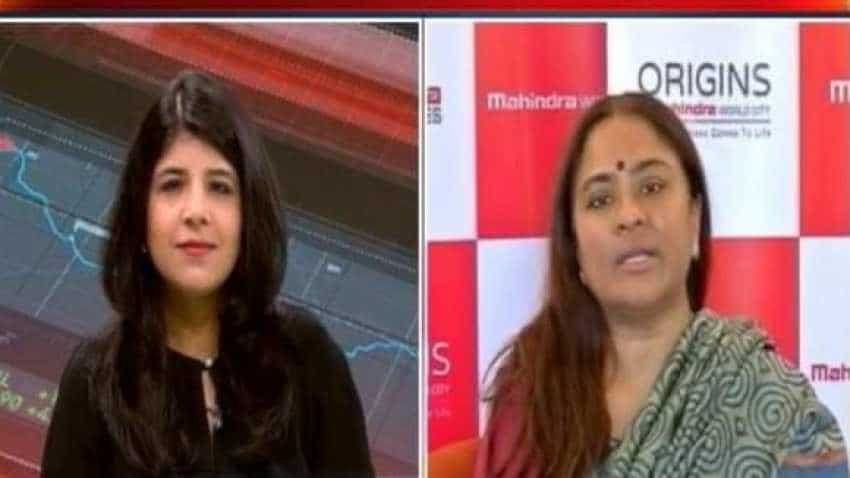 Our inventory levels are quite robust and comfortable at present. It is necessary that one should not have a large inventory level, but it must not be too small, said Sangeeta Prasad.

Profits have declined due to the changed accounting norms as it has changed the way the financial statements are reported. In an exclusive chat with Swati Khandelwal, Zee Business, the MD & CEO of Mahindra Lifespace Developers Ltd., Sangeeta Prasad, said that the new norms say that revenue and profits of the completed projects can only be compiled in the financial statements.

Q: Profits of the company has declined from Rs47.7 crore to Rs31.3 crore. What can be the reason for this decline?

A: Ind AS (Indian Accounting Standard) 115 has changed the accounting norms. Earlier, we used percentage for completion but now the revenue and profit can be a part of the financial statement only if a project or its phase has been completed. The results that are available with you are talking about the past projects that have been completed by now. Quarter performance, now onwards, will be based on quarter-to-quarter mix and completed projects. I would like to request you to have a look at the annual performance because of this Ind AS 115, this performance is not reflective of the inheritance performance of the company. You were talking about good sales but that will become a part of the financial statement only after the project is completed. So, now, we are just looking at the lead indicators like land, launch, sales, completion and cash flow among others.

Q: Margins have seen a shocking downtrend too. What is the reason behind it and how do you plan to manage it further?

A: Two things have happened and the first one is that we went for a one-time land sale in Q4FY18 and therefore results of Q4FY18 is different from Q4FY19, which is based on the operations under which we make houses or lease in the World City. You should also have a look at this difference. Secondly, we have launched ‘Centralis’ in Q4 in Pune and interestingly, the launch expenses are included in the quarter, but its top line can be seen only after the project is completed. Thus, we are looking on these two things to strengthen our financial statements and they are (i) the completion of a good number of projects in every quarter and (ii) receiving lease income from the World City.

Q: But sales have seen a significant positive trend since the last year wherein you managed to gear up from the dip in sales which you saw in FY17. Residential sales booking has crossed Rs1000 crore mark which is a record. How do you see the sales performance from here and update us on demand situation?

A: Last year we launched three projects, one each in Chennai, Pune and Mumbai. Such launches have an impact on sales as customers like to buy our products as they know that Mahindra will deliver it at the right time that to the right price. So, this will be in our focus in FY20 as well, and in the process, we will be launching three projects in Mumbai of which one will be an affordable project and a small project in Chennai. Apart from this, we have bought a land piece in FY19, which will be made launch ready at the earliest. Besides, we will also bestow our ongoing projects with an aim to complete them so that they appear in our financial statement and expedite our lease earnings from the World City. We also have a commercial inventory of land in Chennai and we will expedite it and sell at the right value so that it contributes to our performance in the coming days.

Q: Give us some highlights on the project portfolio. Which segment and areas are giving your business a boost and areas in which you would like to expand your business in the next few quarters?

A: As you are aware of the fact the middle class and affordable segment are the most robust segment in India. So, we are focusing on these two segments for instance last year we launched an affordable project in Palghar and it has performed very well. Similarly, other projects in the mid-income segment like Centralis in Pune and Roots in Mumbai has had a robust performance. So, we want to focus on cities where jobs are being created like Mumbai, Pune and Bangalore. We will also focus on affordable, mid-income and mid-premium income groups and bring new projects in these segments and launch them at the earliest as it will help in increasing our sales and cash flow. The cash flow will help us in buying more land, where more projects can be created.

Q: Recently you have executed definitive agreements to acquire three land parcels. Please throw some light on it?

A: You were talking about the three land parcels that we have done an agreement for the purchase of these lands. In the process, we are not paying complete money at once to the landowners, but we have designed a parallel design under which required approvals will be taken to increase the cash flow so that there is not a big gap between launch and 100 per cent cashflow. This will help in improving our financial performance. So, we have a target to launch the affordable project in FY20 but are waiting for approvals. On the other hand, we are working on finalising the design for the land parcels available in Bangalore and Pune. Soon, the design will be submitted to the authorities and then we will push them to approve them at the earliest so that the projects can be launched.

Q: Update us on the pileup inventories as they always face a distressing situation in the real estate sector? What is your inventory structure at least when your sales are performing so well?

A:  Our inventory levels are quite robust and comfortable at present. It is necessary that one should not have a large inventory level, but it must not be too small. So, our inventory in the ongoing We have inventory in tune of around Rs2,000 crore in the ongoing projects and Rs2,600 crores in projects that will be launched, and we were talking about it earlier. So, in total, our inventory levels of both ongoing and launched inventories stand around Rs4,600 crores. You were also talking about the stressed asset then we closely evaluate the land that is in pipeline so that we can buy them and develop good projects which can be developed and priced rightly.