While speaking at the Morgan Stanley 19th Annual India Summit on Wednesday, Infosys COO UB Pravin Rao said that the company remains "committed" to its guidance of 6.5-8.5% revenue growth this year even as some clients ask for projects to be carried out at 30-40% lower costs than before. 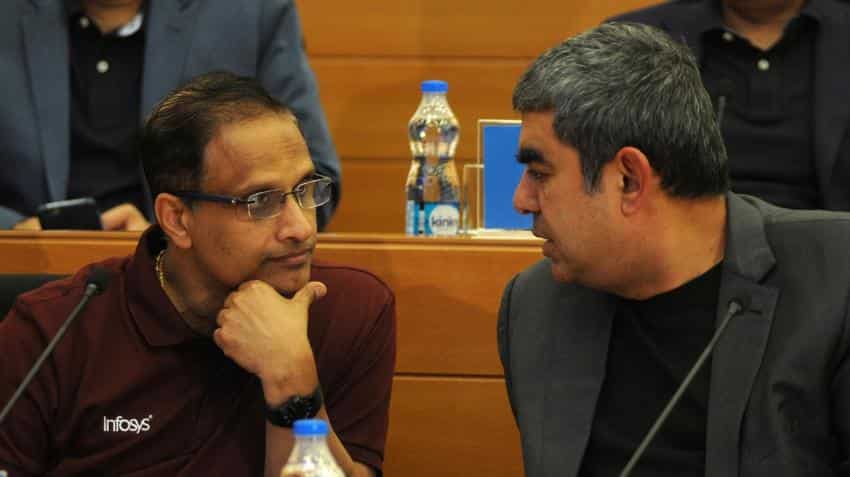 Top Indian IT cos like TCS, Infosys, others will lead in digital business, says recruitment firm Head Hunters India

IT services giant Infosys on Wednesday said it remains "committed" to its guidance of 6.5-8.5% revenue growth this year even as some clients ask for projects to be carried out at 30-40% lower costs than before.

Infosys chief operating officer (COO) UB Pravin Rao explained that while IT budgets have remained at similar levels, clients are expecting that for a three-five year renewal deal there would be a "30-40% cost out".

"We are not seeing any pricing pressure as such... With all the transformation happening, clients are looking at taking cost out and re-investing them in newer areas because IT budget in itself is not increasing," he said at the Morgan Stanley 19th Annual India Summit.

In a statement, Infosys reiterated that the cost take outs by clients do not necessarily translate into an impact on vendor pricing.

"There are enough levers available to meet the client demand on cost take-outs without necessarily impacting the pricing," Infosys statement said.

The statement further said that the company is not seeing anything new on pricing.

"The comments (by Rao)...Refer to cost take out efforts by clients towards reducing their program investments in the 'run' side of business, to reinvest them in newer technologies or the 'change' side of business," Infosys said.

Rao had earlier said there could be certain clients who do not have a strategy in place for new technologies and hence, would take time in investing in the emerging areas.

"That is reflected in the ticket sizes, they are small. We are not seeing any slowness," he said adding that the company remains committed to its revenue and margin guidance.

The $140-billion Indian IT market is facing challenges on multiple fronts including stricter visa regime in key markets and shortage of skilled manpower for new technology areas like data science.

Asked about Infosys' progress in its plan to hire 10,000 people in the US, Rao said the Bengaluru-based firm has started training its first batch of such employees.

Infosys will continue to focus on increasing local hiring in markets where it has a "significant" presence as that is the only way it can "mitigate any long-term impact that you could have on uncertainty around visa", he added.

"We are going to all the premium colleges, community colleges in and around the US. We started that process this year... We have had the first batch," he said.

Last month, Infosys said it will hire about 10,000 locals in the US over the next two years and set up four technology and innovation hubs there.

The first hub, which will open in Indiana in August this year, will create 2,000 jobs by 2021 for American workers. The location of the other three centres will be decided over the next few months.

These hubs will not only train people on technology and innovation but also help in working closely with clients in key industries like financial services, manufacturing, healthcare, retail and energy.

There has been a growing sentiment of protectionism across various markets, including the US, that are seeking to safeguard jobs for locals and raising the bar for foreign workers.

The US had also accused Infosys and its larger rival, Tata Consultancy Services (TCS), of "unfairly" cornering the lions share of the H-1B work visas by putting extra tickets in the lottery system. Every year, the US grants 65,000 H-1B visas while another 20,000 are set aside for those with US advanced degrees.

The tightening of visa norms not only pushes up operational costs for these tech firms but also makes movement of skilled workforce difficult. These companies are now adjusting their business models to reduce their dependence on visas and hiring more locals overseas instead.

Top Indian IT cos like TCS, Infosys, others will lead in digital business, says recruitment firm Head Hunters India