Keki Mistry, vice chairman and CEO of Housing Development Finance Corporation (HDFC), talks about the Q4FY21 numbers, collection efficiency, impact of the second wave of CORONA, the recent announcement of the RBI and NIMs among others during an exclusive interview with Zee Business Executive Editor Swati Khandelwal 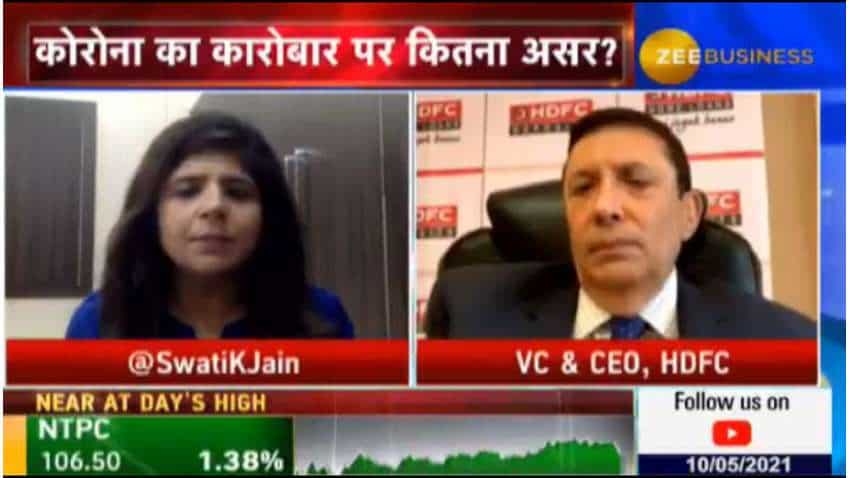 "The collection efficiency came at the pre-COVID level in March month. So, it stood at an almost pre-COVID level of around 98% for individual space," Keki Mistry
Written By: Jitesh Kumar Jha
Edited By: ZeeBiz WebTeam
RELATED NEWS

Keki Mistry, vice chairman and CEO of Housing Development Finance Corporation (HDFC), talks about the Q4FY21 numbers, collection efficiency, impact of the second wave of CORONA, the recent announcement of the RBI and NIMs among others during an exclusive interview with Swati Khandelwal, Zee Business. Edited Excerpts:

Q: Congratulations on the good numbers. What led to this and what was the most remarkable thing in this quarter’s numbers?

So, there was an impact of just 10-11 days in the previous year as compared to this year, where the impact was there in the complete quarter. But despite that, we grew 60% in disbursements. Now, 60% is something which in HDFC’s history has never seen such a growth in the whole quarter in terms of disbursements because our base is quite big. But it was just that a lot of people had COVID which had made it more imperative for people to look for bigger houses, better houses, more airy houses, where both husband and wife, if they both are working from home, then they need their own space, own independence, separate rooms. So, these are the reasons due to which the growth was so good.

Q: How has been the trend in collection efficiency and how it is panning out in April and May?

A: The collection efficiency came at the pre-COVID level in March month. So, it stood at an almost pre-COVID level of around 98% for individual space. For April, it is too early to comment because a lot of effort is made for collection in March and every year in April – it continuing for the last 40 years - that there is an impact because the people who were paying have done everything to not be on NPA on March 31 and have paid their instalments. So, if you will compare April 2021 with April 2019, which is pre-COVID then there was not a huge difference and it was reasonably close to what it was in April 2019.

Q: The second wave of CORONA is being talked about and is impacting demand. What is your observation and how are you seeing the situation in the coming months?

A: It is very difficult to talk about the demand in this short period because, how the lockdowns pan out and how long these lockdowns will continue, will they decrease or increase. We do not know it exactly at this moment, we have to wait and see. But what we have seen is going by the experiences of the last year, once the lockdown is lifted and people start feeling comfortable again, a lot of people started going to work then growth came back in a phenomenal manner. So, I feel, in a short term, it is difficult to say maybe there will be some impact on growth. Once the normalcy returns and the second wave is a little behind us, I would expect the growth to go back to what it used to be in the past.

Stamp duty was reduced in Maharashtra from 5% to 2% if the transactions are done till December and 3% if it is done from January to March. The registrations that we saw in Maharashtra have been record registrations and the stamp duty collection has been so much higher than what it used to be despite cutting the stamp duty rate. So, by cutting the stamp duty rate the Maharashtra government has benefitted by notching higher revenue. More importantly, a lot of jobs were created because due to demand construction activity takes place and in constructions, you have mansions, carpenters, plumbers, engineers and so and so as well as ancillary industry, like cement industry, steel industry, paint industry and all these industries get a boost when housing gets a boost. So, you are creating numerous jobs at the same time.

Q: RBI in its recent announcements has seen its thought process for the NBFC’s and a vision that is being created. What is your view on it and what are your comments on it?

A: There is nothing specific that has been done for the NBFCs and frankly nothing specific was required because RBI has done a great job on liquidity in terms of infusing liquidity into the system and we have to compliment RBI as it has done a phenomenal job, right through last year not only in ensuring that there is liquidity in the market but more importantly by ensuring that every segment of the market has an access to that liquidity. So, RBI should be congratulated for what they have done in over the last 12-13 months.

Q: What is your outlook on NIMs? Since, cost of funds has come down, so, do you think that more provisioning will be required in the coming time?

A: For provisions, we have been always proactive and will continue to be proactive and will continue to remain over provided beyond the regulatory requirements because it comforts us. So, we would like to be proactive in provisioning. As far as NIMs is concerned, NIMS is a function of how much liquidity you keep aside in the balance sheet. Last year because of the pandemic, we maintained excess liquidity in the balance sheet. And, the excess liquidity that we have in our overnight treasury, overnight liquid funds and money market funds, then the return on that liquidity is lower than the cost of fund. So, it has a roughly 3% of the impact in terms of the negative tariff that we get due to excess liquidity. So, it is something that the ALM committee will continue continuously and take a call that whether we should continue with an excess of liquidity, increased liquidity or reduce liquidity or we should manage it.

Q: We are seeing a spike in stage two this quarter. Has restructuring increase or people did not pay on time. Exactly, what has happened?

A: It was not huge and our restructuring stood at around Rs 4,000 crore on a balance sheet base of Rs 5 lakh crore. But all restructured accounts have been downgraded to stage II or IV. So, the increase in stage II is visible in non-individual loans is because of the downgrading of the restructured loans in stage II.