Cipla is investing a lot on R&D; Clinical trial of Generic Advair’s is going on track: Kedar Upadhye

Cipla has launched several limited component products in the last 3-4 quarters, especially in quarter 4 and quarter 1. 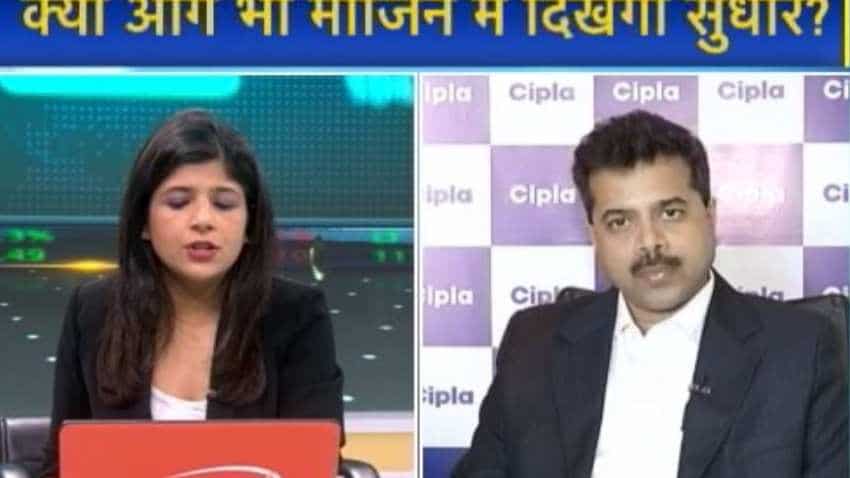 Cipla launched Cinacalcet, a generic version of Sensipar, a branded drug, in the Q4FY19 and it benefited us a lot. Image source: Zee Business TV
Written By: ZeeBiz WebTeam
Edited By: Manas Tiwari
RELATED NEWS

Cinacalcet, a generic version of branded-drug Sensipar, had a huge contribution to our revenues in the Q1FY20, says Kedar Upadhye, Joint President & Global CFO, Cipla Limited. In an interview with Swati Khandelwal, Zee Business, Upadhye said “We have changed distribution pattern for the trade generic business, which had an impact of almost Rs150-200 crore on our revenues”. Edited Excerpts:

There has been a lot of growth in American business. Name the drugs that played an important role in this growth?

Cipla has launched several limited component products in the last 3-4 quarters, especially in quarter 4 and quarter 1. In the fourth quarter (Q4FY19), we launched Cinacalcet, a generic version of Sensipar, a branded drug, in the Q4FY19 and it benefited us a lot. Apart from this, we also launched other products in this period like Budesonide, Isoproterenol and Diclofenac Gel. Portfolio profile of our new products, which were launched in the last 4-5 quarters, has been very healthy. So, Cinacalcet has a huge contribution to the revenues apart from Cinacalcet many other products that I have mentioned have also contributed to our revenue.

There is a slight difference in consumption but there are two things, which must be adjusted, and they are (i) we have changed the distribution pattern of the trade generic business after noticing that our buying behaviour was getting concentrated. That’s why consciously we changed the distribution pattern intending to increase affordability and access and bring discipline in a commercial term.

This change of the pattern had an impact of almost Rs150-200 crore, but it is good and will make our business sustainable. (ii) Maximum of our dispatches differed to July, so ideally one would have billed it in the first quarter, but its dispatch and billing differed to July, and we term it as sales cut off, which was unusually high in this quarter. So, these are the two factors that led to this decline but fundamentally believe that our prescription generation numbers, secondary sales and therapy-by-therapy growth market strategy have been quite healthy, and we continue to be positive. The change in distribution pattern in the trade generic business shows that we are committed to this market.

Is there any increase in the company’s expenditure on R&D as compared to the past? Name drugs on which company is researching at present and has also increased its expenses on the research project?

We are increasing our R&D spending on two-three products including generic Advair version, whose clinical trial is going very well on track. We have also been able to enrol the targeted number of patients. Apart from this, we have three-four additional products like inhaled itraconazole, which is being co-developed with our co-developer partner Pulmatrix in the US. So, there are three-four development programs where we are focused and will continue to invest aggressively.

There has been a decline in earnings from the API segment. What can be the specific reason behind this decline and what is the importance of this vertical for the company?

There is nothing specific in API and it is a business to business vertical. So, our revenue depends on the buying pattern of our customers and this is something that leads to certain quarter-to-quarter fluctuations. But our API business’s margin profile is very healthy.