China's technology company LeEco is reported to have fired 85% of its staff in India and may exit from its operations in the country in next few months. 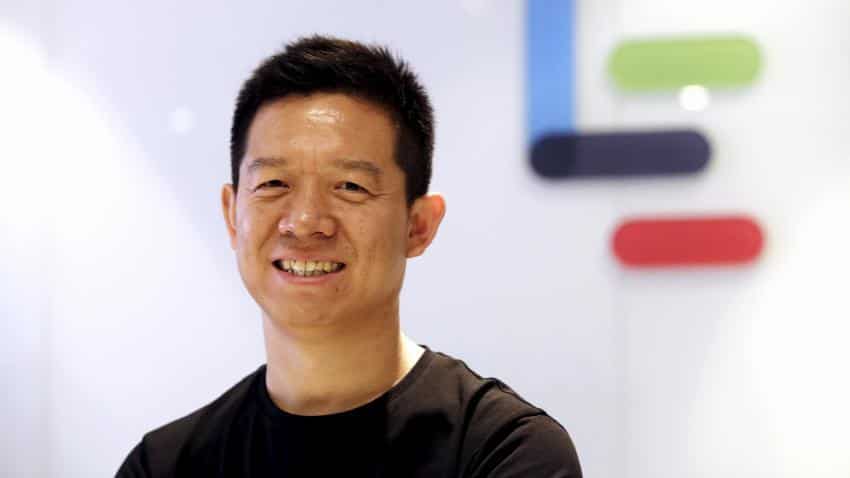 Jia Yueting, co-founder and head of Le Holdings Co Ltd, also known as LeEco and formerly as LeTV, poses for a photo in front of a logo of his company. Image Source: Reuters
Written By: ZeeBiz WebTeam
RELATED NEWS

1. Industry executives attributed the likely exit of LeEco due to the financial crisis at the parent firm and its decision to focus on China and the US

2. The company is projected to downsize its staff from the research and development operations in India

China's technology company LeEco is reported to have fired 85% of its staff in India and allowed exits of its top senior management level executives, The Economic Times reported.

The company, which outflanked Xiaomi, Oppo and Vivo with an advertising budget as high as Rs 80 crore a month, had exited sales through offline retail stores in December.

According to the news report, LeEco's founder and chief executive officer Jia Yueting in November last year had written an e-mail to employees saying the firm had burnt cash too quickly as it expanded into businesses ranging from smartphones to driverless cars.

The founder had acknowledged its global expansion strategy went too far in the face of limited capital and resources and that it would cut costs and realise efficiencies.

Industry executives attributed the likely exit to the financial crisis at the parent firm and its decision to focus on China and the US, the report said.

The company has cut down jobs at its offices in Mumbai and Delhi locations in India and at present it is firing employees at the research and development centres (R&D) in Bengaluru, the report said citing the sources, as saying.

When the newspaper asked LeEco India's head about layoffs, its chief operating officer Alex Li said the company has recalibrated and reimagined its business in India since last year and has taken steps to ensure that the scale of operations is in sync with resources.

Li confirmed the exit of the two senior executives, but denied any plans to exit the market or liquidate stock.

None of it was triggered by the alleged slump in sales due to demonetisation, he said.

"All businesses need to be profitable to be sustainable. That has been the primary objective in taking certain measures, though the numbers (of layoffs) indicated are incorrect," Li told the newspaper.

The report citing one senior executive working with a leading e-commerce marketplace that does business with LeEco said the company is preparing to exit India as it has been struggling to find a winning formula, with demonetisation further hurting sales.

"Xiaomi is strong online and Oppo-Vivo offline. So, LeEco found it neither here nor there," cited the senior executive requesting anonymity.

The report further citing another senior industry executive said LeEco was currently liquidating stock and will exit in the next few months.

The company is projected to downsize its staff from the research and development operations (R&D) in India.

"The R&D operation may remain for some more time since it does work for the US operations. But it will be downsized," senior industry executive said.

The Chinese company had entered India February 2016 in a partnership with Flipkart and immediately caught consumer attention with an advertising blitz, spending as much as Rs 80 crore every month, offering great deals for smartphones and large-screen LED television sets.