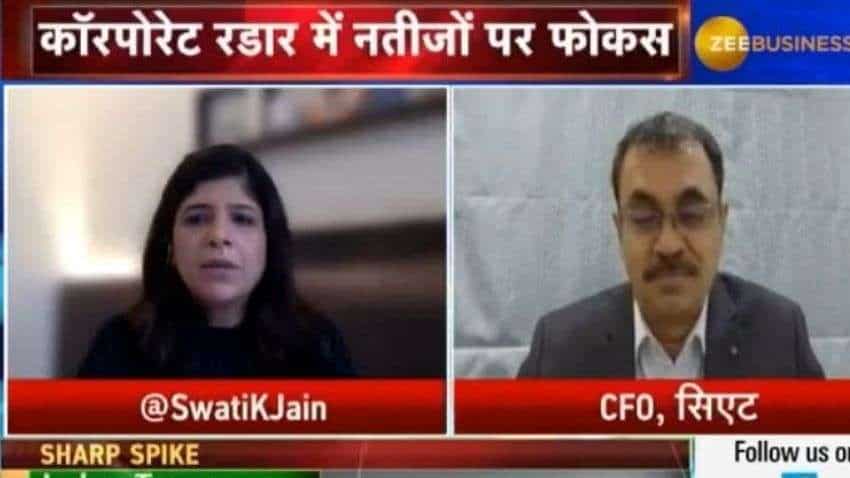 Kumar Subbiah, Chief Financial Officer, CEAT Tyres Limited says the Rs 1,200 crore will be used in two phases, approximately Rs 700 crore will be invested now, and the balance will be invested depending upon the volume growth in that period. Mr Subbiah also talked about Q1FY22 numbers, price hikes and the impact that the shortage of semi-conductors with OEMs will have on the business of CEAT among others during a candid chat with Swati Khandelwal, Zee Business. Edited Excerpts:

Q: CEAT has posted good numbers. How will you sum up this quarter however the margins are still under pressure but the company has moved to profit from losses? Do you think that this performance is sustainable?

A: In quarter one; we were impacted to a large extent on account of COVID wave-II. Though we have grown by 70% of the same quarter of the last year and on quarter-on-quarter, we declined by little over 17% and we attributed to the lockdowns during the months of April and May. Going forward, I think, as far as July is concerned, it looks like the market has reasonably recovered, particularly the replacement market and the original equipment manufacturers are manufacturing more vehicles now more than the quarter one. The cost pressures still continue and in the last three quarters, every quarter, we saw a kind of commodity Bull Run, though the steam in the Bull Run is much lower today. Even in the current quarter, we expect the raw material cost to be higher than the previous quarters. So, the pressure on margins on account of the increase in raw material cost continues and we have mitigated the impact of raw material cost to some extent through price increases at different points of time. It looks like, I think, we need to take few more price increases to mitigate the impact. So, on the top line, in case, the COVID wave-III doesn’t impact the economy in the current quarter, the revenue should go back to the normal level. As far as the margin is concerned, I think, it will come under some pressure on account of the increase in raw material costs and with that we are trying to mitigate progressively through price increases.

Q: By when these price hikes can take place and what can be its quantum? Also, how far we are to come to a reasonable level from where the margins will start being better?

A: I will just give you some trends also. In quarter one, the quarter that went by raw material cost went up by about 12% above the previous quarter and we saw an 8-10% increase in quarter four of the last financial year, also over the previous quarter. So, the commodity cost increase has been continuing and after adjusting all the price increases, we have taken progressively in the last two quarters. It looks like we need to take another about 5% approximately in the replacement market to mitigate the impact of raw material cost increase and that is the kind of thing pending. Our view, I think, because commodity has had a long run in terms of prices, we hope it stabilizes in the current quarter and beyond that 5%, even if the raw material prices stabilize, which is what we hope, then there will be a need for a price increase to mitigate the impact of raw material cost should slow down or should come down, that is what our views are.

Q: You said that demand is increasing but some companies for example Tata Motors has said that the shortage of semi-conductors is delaying the production. What impact it is having on your business and how the demand in the replacement market is panning out? Also, recently there was news that CEAT will supply tyres for M&M's new seven-seater Bolero Neo. How big is this order and also any more in the pipeline?

A: In general in the last quarter, overall OEM revenues had declined by a little over 30% over the previous quarter. So, you would have seen the number of OEM, whether it is two-wheelers or truck and bus manufacturers, passenger car manufacturers most of had a drop in demand and therefore drop in sales in the months of April and May. There was some recovery in June and we are seeing some more recovery in July. So, overall, that is a kind of decline in quarter one over the previous quarter. Secondly, with respect to the supply of chips for automobile manufacturers, particularly the name you mentioned, our exposure is limited, so, that is already there in the baseline, so there would not be any incremental impact in the current or next quarter on account of any shortage of chips for OEM manufacturers and therefore we do not expect any impact on the supply of tyres. As far as the replacement market is concerned, we are seeing recovery in the replacement category since the beginning of July but we would not be able to comment on the overall quarter because there is also some fear of COVID wave-III impacting the economy. In the event, if the economy remains normal, we expect a recovery in the replacement segment in the current quarter. Most of the categories have recovered in the month of July except the truck segment where we still do not see full recovery, particularly in certain parts of the country. As the number of COVID cases is coming down progressively, we hope there will be a recovery in the latter part of the current quarter and that is where I would like to summarize. Regarding the M&M volume will not be able to comment, now, in terms of what is the extent of volumes that we have tied up on that vehicle because it depends entirely on how the new model sells in the market.

Q: The Company has earlier announced a CapEx of around Rs 1,200 crore for your truck and bus plant. How will you fund it and going forward what kind of expansion you are seeing with respect to the domestic and international space?

A: This Rs 1,200 crore is in addition to the expansion plan that is already undergoing and we completed the truck and bus radial expansion in quarter four of the financial year 2019-20 at the existing location of Halol. What we announced three months back was about putting up a new facility at Chennai at our existing passenger car radial tyre facility involving an investment of Rs 1,200 crore, this is what you mentioned. In general, whenever, we undertake such investments, we make certain assumptions with respect to how much will be funded through internal accruals and how much will be the quantum of debt. And underline assumption is that it will be 2:1 in which debt will be 2 and 1 will be internal accrual. That is the assumption that has been undergone. But, however, we always try to keep certain leverage ratios within certain limits and that is how we operate, so we do not have to over-leverage in terms of debt. So, we are healthy, if you look at our balance sheet and the debt-equity is still 0.5 to 0.55 level, which is quite comfortable today. Even on that debt EBITDA also, we are much below the internal threshold. So, how do we fund, we have adequate limits, the unutilized limits for the current project involving Rs 3,500 crore, so we do not expect much of an issue in terms of funding it but you will find it in the ratio that just now, I mentioned. We generated a reasonable amount of cash flows last year and we managed to repay about Rs 500 crore of debt during the last year. So, therefore overall debt has come down and we should not have any problem in terms of funding that. The Rs 1,200-crore project is going to be implemented in two phases. The phase-I involving a little around Rs 700 crore of investment, we expect the facility to be commissioned in two years, or 21 months approximately. Phase-II involving a balance of Rs 500 crore of investment depending upon the volume growth during this particular period, depending on the milestones. We expect it to take around 12 months or so. So, it is 2+1 in terms of implementation.