Except for Mahindra, which posted a small decline in sales, a majority of car makers posted double-digit growth during the month of February. 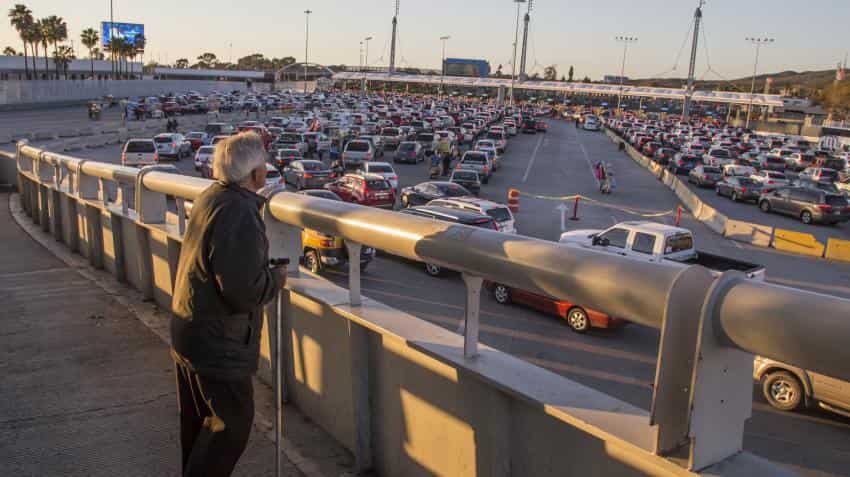 A man looking at cars passing by on a highway. Photo: IANS
Written By: ZeeBiz WebTeam
RELATED NEWS

Volkswagen says, it has fixed 470,000 cars in Britain affected by diesel scandal

The automobile industry has saw good recover in the month February and left the demonetisation blues far behind. Domestic car sales of most automobile companies in India during February posted a double digit growth during the month. This included Maruti Suzuki, Tata Motors, Nissan, Toyota, Renault and Ford. However, leading SUV player Mahindra & Mahindra continued to struggle in terms of sales but has seen an improvement from the previous month with a 2.26% decline in sales.

The country's largest car maker Maruti Suzuki on Wednesday posted a 11.7% growth in sales as it sold a total of 1,30,280 vehicles in the month of February 2017, from 1,17,451 vehicles sold in the same month of previous year.

Its utility vehicles once again bagged the spot light for Maruti Suzuki by recording a whopping growth of 110.5% with sales of 17,863 vehicles in February 2017 compared to 8,484 vehicles in February 2016. Among passenger cars only mid-size and compact vehicles performed better with sales of 5,886 units and 47,002 units increasing by 14% and 9.4%, respectively. Maruti's mid-sized segment includes Ciaz and compact vehicles involves Swift, Ritz, Celerio, Baleno, Dzire and Ignis.

The second largest car maker in India Hyundai Motor India Ltd (HMIL) however posted a lower growth of domestic sales, which were up 4% at 42,327 units during the month as against 40,716 units in the year-earlier period.

HMIL Senior Vice President - Sales and Marketing, Rakesh Srivastava said during the month, there was "increased customer visits and conversions on the strength of improved customer confidence generated by the Union Budget, positively impacting the customer disposable income and overall business sentiments".

Tata Motors said sales of passenger vehicles in the domestic market went up by 12% to 12,272 units last month. Tata Motors President, Passenger Vehicle Business Unit, Mayank Pareek said the growth in February was due to "a continued strong demand for the Tata Tiago".

Ford India too saw a massive 52% growth in sales during the month as it sold 8,338 units in February this year as against 5,483 units sold in February last year. Ford India Executive Director, Marketing, Sales and Service Anurag Mehrotra said "the industry is seeing some green shoots, recovering from the impact of demonetisation".

Toyota Kirloskar Motor also reported an 11.93% growth in domestic sales at 11,543 units in February. The company had sold 10,312 units in the domestic market in February last year.

Nissan Motor India today reported 24.86% increase in domestic sales in February at 4,807 units as against 3,850 sold in the same month last year.

Honda Cars India just marginally missed from a double digit growth as it reported a 9.44% increase in domestic sales at 14,249 units in February as against 13,020 sold in the same month last year. "The market has shown positive sentiment during February and HCIL has also benefited from it," HCIL President and CEO Yoichiro Ueno said.

Home-grown car market Mahindra & Mahindra, however, reported a 2.26% decline in its domestic market at 40,414 units last month compared to 41,348 in February 2016. "The auto industry is seeing some positive trends emerging over the last two months. With rural sentiment improving, we believe there will be a turnaround in demand over the next few months for small commercial vehicles space," M&M Chief Executive (auto division) Pravin Shah said.

However, the two-wheeler segment, except for Royal Enfield, still continues to suffer from the impact of demonetisation. Two-wheeler companies such as Hero MotoCorp and TVS Motors saw a decline in sales during the month.

In the two-wheeler segment, Royal Enfield, the two-wheeler division of Eicher Motors, reported an 18.88% jump in total sales at 58,439 units in February as against 49,156 in the same month last year.

Volkswagen says, it has fixed 470,000 cars in Britain affected by diesel scandal