Top car makers such as Maruti Suzuki, Hyundai, Tata Motors and Mahindra posted a growth in sales during August, however Ford India and Toyota Kirloskar Motors posted a decline in sales. 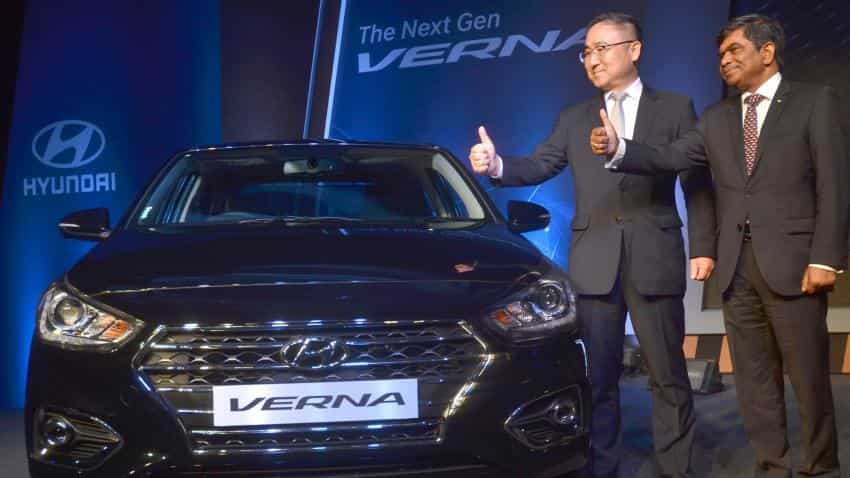 The country's largest car maker Maruti Suzuki India on Friday reported 23.8% increase in total sales at 1,63,701 units in August as against 1,32,211 units in the year-ago month.

The auto major further said sales of the compact segment comprising Swift, Estilo, Dzire and Baleno jumped by 62.4% to 74,012 units last month as against 45,579 units in the year-ago month.

Maruti Suzuki said sales of mid-sized sedan Ciaz grew by 3.9% to 6,457 units during the month.

Hyundai Motor India reported a 9% increase in domestic sales at 47,103 units in August.

HMIL Director, sales and marketing, Rakesh Srivastava said August sales were boosted by strong response to the newly launched Verna that received more than 7,000 bookings within 10 days of launch.

He said the market faced challenges from floods in many states and also speculations on the GST cess increase.

Auto major Mahindra & Mahindra reported a 3.75% increase in total sales at 42,116 units in August. The company had sold 40,591 units in the same month last year, the company said in a statement.

Mahindra, President Automotive Sector Rajan Wadhera said the upsurge in demand has been due to good monsoons and rural penetration. “Our brands continue to gain traction despite several external challenges. As we get into festive season, we are confident of a good growth over the next couple of months, on the back of our diversified product portfolio,” he added.

Tata Motors reported 13.64% increase in total sales at 48,988 units in August. The company had sold 43,105 units in the same month last year, Tata Motors said in a statement.

Domestic sales of commercial and passenger vehicles last month were at 45,906 units as against 36,510 units in the same month last year, up 25.74% on the back of growing demand across segments and increased positive customer sentiments, it added.

Tata Motors President, Passenger Vehicles Business Unit, Mayank Pareek said the sales growth has been on the back of strong performance of the new generation cars like Tiago, Tigor and Hexa.

"With Ganesh Chaturthi, we have entered the festive season and we expect the growth momentum to continue," he added.

However, Toyota Kirloskar Motors and Ford India reported a decline in sales during August.

Toyota Kirloskar Motor (TKM) reported 6.86% decline in total sales at 13,081 units in August. The company had sold a total of 14,045 units in the same month last year, TKM said in a statement.

Toyota Director and Senior Vice-President - Sales and Marketing N Raja said, "Our sales numbers this month are not truly reflective of the existing customer orders. Post the announcement on potential cess hike, there was a considerable rise in customer inquiries and orders."

He said the company faced production limitations which held it back from catching up with high demand and holidays in August also led to lesser number of production days.

"With the demand on the rise, the current waiting period for Innova has gone up to around 6-8 weeks and Fortuner is around 10-12 weeks respectively," Raja added.

Demand for hybrid product Camry Hybrid has fallen significantly owing to the price hike after GST implementation, he said, adding the company was hoping that the government would reinstate "the preferential (lower) tax rate in favour of clean and green technologies such as strong hybrids similar to pre-GST era".

Ford India reported 40.39% decline in total sales at 15,740 units in August this year. The company had sold 26,408 units in the same month last year, Ford India said in a statement.

Stating that the company is looking forward to the festive season, he said the company expected a stable and conducive policy framework from the government "as frequent changes in tax rates threaten to have an adverse impact on consumer sentiment".

Two-wheeler companies sales have seen a recovery during the month of August post GST and some companies have even grown by a huge margin.

Domestic sales increased marginally at 2,00,659 units as against 2,00,314 units in the same month last year, Bajaj Auto said in a statement.

Suzuki Motorcycle India reported 54.25% jump in sales at 56,745 units in August, its best ever monthly sales.

The company had sold 36,787 units in August last year, Suzuki Motorcycle said in a statement.

Buoyed by the robust performance, the company said it is targeting an annual sale of 5 lakh units in 2017-18.

"Our performance in August has been consistent with the rapid strides that we continue to take in FY 2017-18," Suzuki Motorcycle, Executive Vice-President Sales and Marketing, Sajeev Rajasekhran said.

He said the introduction of new Gixxer ABS variants and Gixxer Special Edition ahead of the festive season has injected a renewed confidence in the company's efforts to best serve its customers.

In the same month last year, the company had sold 55,721 units, Eicher Motors said in a statement.

The commercial vehicle segment, which has been struggling post the BS IV impact, has managed to see a very good growth during the month. CV companies such as Ashok Leyland, Tata Motors and Mahindra posted a double-digit growth in sales in August.

Tata Motors' commercial vehicle segment saw its domestic sales rise up by 34.53% at 31,566 units last month as against 23,464 units in the year-ago period.

"In line with our turnaround strategy, we will be introducing new products and will continue to undertake appropriate measures to improve our performance across segments," he added.

However, commercial vehicles maker SML Isuzu reported a 50% decline in total sales at 541 units in August 2017.

The company had sold 1,082 units in the same month a year ago, SML Isuzu said in a BSE filing.