Netflix recently tied up with DTH players such as Videocon d2h and Airtel DTh, apart from signing a deal with Vodafone. 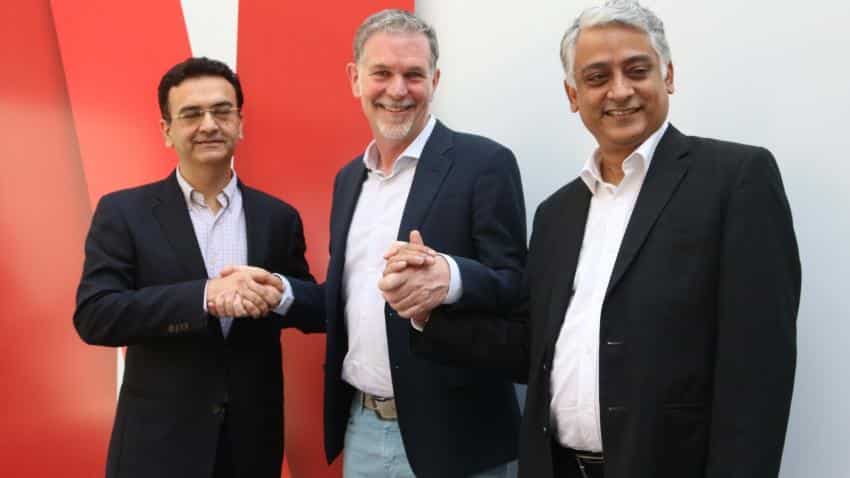 Netflix recently signed partnerships with DTH and telecom companies Videocon d2h, Airtel DTH and Vodafone enabling their users to access the video on demand (VOD) services and extensive library of TV series and movies Netflix has to offer.

Netflix CEO Reed Hastings, who was in Delhi on Monday, made these announcements.

Hastings said that while the partnerships with Airtel and Videocon d2h are for the set-top boxes, the Vodafone partnership is for the payment integration. He further said Netflix is in discussion with telecom players in India for partnerships.

Considering it has been receiving tough competition from players such as Amazon Prime Video who offers its VOD services for a low price of Rs 499 a year.

The competition does not stop there, as YouTube has just entered the fray in the US with the launch of YouTube TV just a few days back and could enter the Indian market soon. Even Facebook is looking to launch its own video and original content platform soon.

These deals is likely to provide Netflix a significant boost into the Indian market who has been looking at making inroads into the market since its arrival in January 2016.

For instance, Netflix's decision to partner with DTH players such as Videocon d2h and Airtel DTH means that it is looking to get an access into the 175 million TV households universe in India as in 2016, which is growing at 62% growth rate.

As for telecom company Vodafone, it has a subscriber base of 206.44 million, according to data released by Cellular Operators Association of India (COAI) at the end of January 2017. This gives it a further leverage to get its content and subscription base higher.

While one can expect more partnerships with telecom players, the deals with cable and satellite TV players can be one of the break through moves for the US-based company.

Though it gives Netflix a wide platform to reach to the Indian masses, it still has some issues to sort out.

For starters, Netflix will only be available on an exclusive app available on Videocon's HD SMART Set-top Box or Connected Set-top box which converts any existing TV into a Smart TV. This means that only those who have the particular set-top box will be able to opt for Netflix on TV and those who don't would have to purchase it.

This set top box costs nearly Rs 2,490 for those Videocon customers who are looking to upgrade their set-top boxes, but for new customers they would have to pay Rs 3,490. Apart from this, are the subscription charges. As a result many might not choose opt to bear these additional set top box costs when they do not have any installation costs for a Netflix subscription online.

Besides this, the set top box needs to be connected to the internet through any Wifi or Ethernet connection in the home for accessing a curated set of applications available through the internet. The minimum internet speed needed is 2 Mbps, said the company. This means additional internet charges that have to be paid by the customer.

Simply put, existing Netflix customers may already be using streaming devices to cast shows on their TV sets up gaining new customers seem to come at a high acquisition cost.

Another hurdle is the per month subscription charges. While Netflix charges Rs 500 per month for its basic pack online, it is still not known what the charges will be on the packs for Videcon d2h or Airtel DTH.

Considering that cable operators charge on an average Rs 300-350 per month, this price would put it out of range for a majority of TV viewers in India. Only those who opt for HD packs, which is still quite a small market in India, might be willing to shell out that money.