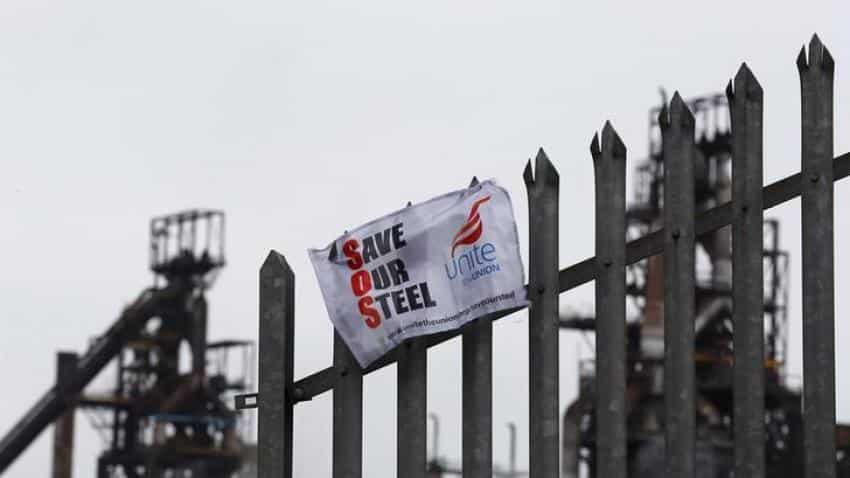 File photograph shows union banner hanging from a fence in front of the Tata steelworks in the town of Port Talbot. Image Source: Reuters
Written By: Reuters
RELATED NEWS

A steel industry plan to change its pension scheme and allow the sale of Tata's British operations is likely to be scrapped in favour of a fix that avoids a political row, government and industry sources told Reuters.

Tata in March put its British steel operations up for sale, saying it could no longer sustain heavy losses.

But the liabilities of the huge British Steel Pension Scheme - around 14 billion pounds ($18.63 billion) for which Tata is the principal sponsoring employer - are standing in the way of a deal with any buyer.

Industrial sources say the favourite outcome would be a joint venture with Thyssenkrupp of Germany, which like Tata in Britain is anxious to get steel-making off its main balance sheet.

To clear the way for a deal, the British Steel Pension Fund, supported by Tata and steel workers backed a change in the way the scheme's annual inflation increase is calculated, reducing benefits. The impact would be slight for most of the 130,000 scheme members, but deeper for nearly 6,000.

This option would keep the pension scheme intact but require new legislation, making a special case for Tata.

A government source, speaking to Reuters on condition of anonymity, said that solution was dead because there was not enough support in parliament for a plan that could act as a precedent.

Other pension schemes might also argue they should benefit from a change in legislation, Martin Hunter, senior consultant at pensions consultants Punter Southall, said.

The government is also anxious to avoid a potentially contentious parliamentary debate so soon after the divisive vote in June to leave the European Union (EU).

The source said the likely solution was to use a provision in existing law that would allow the transfer of Tata's pension liabilities into the Pension Protection Fund (PPF), which protects pensioners if their own fund becomes insolvent.

Former pensions minister Ros Altmann said this approach was "best for the pension system" and there was no need for new law.

Using the existing PPF structure rather than enacting new legislation could also mean a speedier deal.

But Tata Steel and the trustees of the British Steel Pension Scheme say the PPF is not the best outcome for its workers and members.

Transferring the pension to the PPF safety net would cut benefits by 10% for those below retirement age, with larger cuts for the best-paid or those with the longest service, because of a compensation cap imposed by the PPF.

"We encouraged employees to support that same option as, in the analysis of the trustees, the option was of benefit to the vast majority of scheme members," he said.

The trustees said the pension scheme was well funded and able to provide better benefits than the PPF. "We believe that better outcomes can be achieved for our members by staying out of it," they said in an email.

There are no negotiations on the issue, but the government launched a consultation in May on how to separate the pension from Tata. It closed on June 23, the date of the nation's vote to leave the European Union (EU).

The pension funds and businesses that took part, including Tata and the British Steel Pension Scheme, had expected results to be published in August, but the government's assessment of the more than 4,500 responses has yet to be made public.

"We are still considering the responses and will respond in due course," the Department of Work and Pensions said in an emailed response without saying when that would be.

Pensions analysts said they favoured using the existing safety net because a special steel scheme might run up higher deficits in the future.

"The scheme would be exposed to investment risk and the risk that people live longer than expected – the company is not going to put any more money in," Punter Southall's Hunter said.