Boeing Co is counting on a new kind of worker to help it reach a long-coveted target of rolling out 14 787 Dreamliners from its factories each month: half human, half robot. 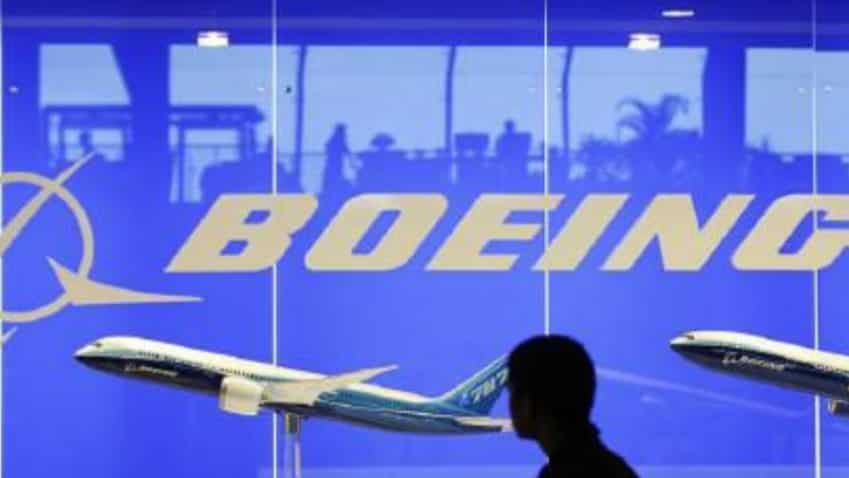 Boeing Co is counting on a new kind of worker to help it reach a long-coveted target of rolling out 14 787 Dreamliners from its factories each month: half human, half robot.  The world`s largest planemaker is equipping mechanics with exoskeletons, similar to ones that allow cameramen to quickly navigate the sidelines of NFL football games, to increase their strength and speed. The high-tech suits also help reduce fatigue on repetitive tasks, such as overhead drilling.

"You have the capability of a robot and the capability of a human being melded together," Christopher Reid, a Boeing associate technical fellow who previously designed NASA spacesuits, told Reuters during a factory tour. The new technology is an example a broader shift in the industry’s focus towards production, as planemakers face the task of making good on a record order boom. After a decade in which Boeing and Airbus generated massive orders fueled by the rise of China and emerging markets, the main battleground is shifting towards production strategy rather than market share.

At twin Dreamliner factories in South Carolina and Washington state, Boeing also plans to soon deploy Bluetooth-enabled `smart` wrenches that signal if machinists apply the correct torque to a nut, and has introduced new self-driving work platforms to shave time off aircraft assembly, according to people familiar with the technologies.

Such technology investments will help the U.S. manufacturer accelerate 787 Dreamliner production to 14 a month from 12. Chief Executive officer Dennis Muilenburg announced the preliminary rate change on Wednesday, and said he expects to complete the production increase in the second quarter. Building the carbon composite Dreamliner at the new rate, first reported by Reuters, is central to Boeing`s efforts to raise profit margins and claw back deferred production costs as it competes with arch-rival Airbus SE in a crowded but lucrative widebody market.

Boeing rolls out a new 787 with a minimum list price of $239 million every 1.75 days. At `rate 14,` that new pace drops to 1.5 days to make a new Dreamliner. At today`s rate, Boeing is reducing the 787 $23 billion in deferred production costs by $16 million per aircraft, Canaccord Genuity analyst Ken Herbert said. "That number will clearly improve at the new rate."

MELDING HUMANS WITH ROBOTS
Boeing estimates the exoskeletons, which cost about $4,500-$7,000 apiece, have sped up work tasks in test groups of mechanics in South Carolina, though Boeing declined to share data. If trials continue to show improved safety and productivity, Boeing says it wants to deploy them to thousands of workers across the company over the next two years.

In recent weeks, Boeing has also introduced custom-built, self-driving work platforms similar to scaffolds that hug an airframe so mechanics can work as a jetliner pulses along the assembly line. Before, work stations had to be moved with fork lifts. Boeing`s 787 mostly competes against the A350, of which Airbus builds 10 a month. These widebody planes represent hundreds of billions of dollars in sales over 20 years.

Both are modernizing their factories. But on widebody jets, Boeing`s higher production rate gives it the advantage to drive down costs across its supply chain and sell more of its pricier Dreamliner variants, like the newest 787-10.  In the fourth quarter, Boeing said its operating margin on commercial aircraft increased to 15.6 percent from 11.6 percent from a year ago, partially driven by higher margins on the 787 Dreamliner widebody.

INNOVATION AND INSPECTION
In South Carolina, engineers in a tiny workstation known as an "innovation cell" huddle around computers, 3D printers and a virtual reality system to help mechanics test out new tools without snarling the factory flow. Before the cells, Boeing said workers had no formal place to test out new ideas or complain about niggling problems, leaving them to fester for years in some cases.

Boeing said three innovation cells in South Carolina have saved millions of dollars in costs since 2017 with a raft of time-saving tools, such as a 3D-printed curved ruler. The ruler alone cut six hours off the time it took a mechanic to hand-measure all the placards mounted above the seats inside on section of a 787.  In Washington state, it has opened innovation cells at its widebody plant in Everett and its 737 plant in Renton, also set for 2019 rate increase.

The new time-saving technology is aimed to help cut back on the cost of inspections that Boeing says have been made obsolete due to the new digital technology.  "Don`t inspect things twice," Mark Stockton, engineering director for Boeing South Carolina, told Reuters during the factory tour. "Inspect things once and validate things once."

Boeing said it did not expect that these changes in inspections will result in the loss of jobs. But a union official asked about the strategy warned it carries risks such as higher injury rates, or potentially delayed aircraft deliveries, if last-minute problems are discovered.  "Removing thousands of inspections per airplane will negatively impact the manufacturing process and push defects down line," IAM 751 spokeswoman Connie Kelliher said by email.