While these two airlines will be struggling, it is now clearly expected that another airline namely Indigo will be a winner with more passenger growth and hence good profit ahead. 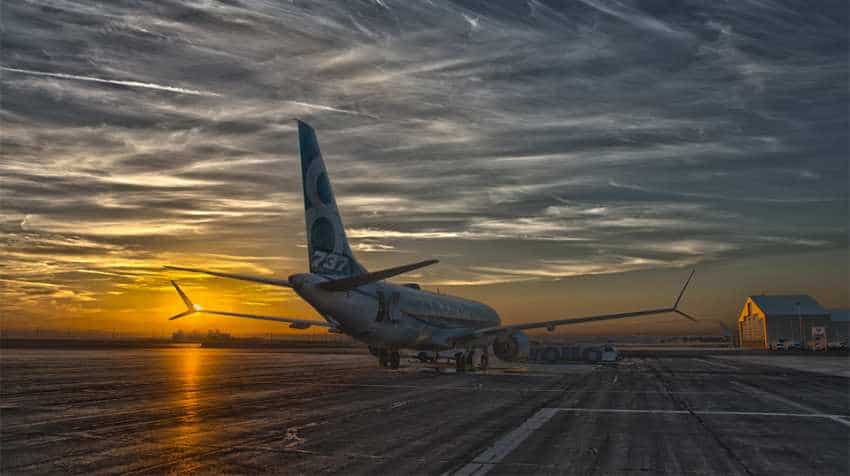 In India, SpiceJet and Jet Airways alone have 116 and 125 of Boeing 737 Max 8. Photo:
Written By: Pooja Jaiswar
RELATED NEWS

Boeing 737 Max family which was launched to become a success story of their maker and change the way a passenger travels through air, has now started to give sleepless nights to the aviation industry across the globe. Back in India, the impact of this Boeing 737 Max has emerged to be a serious business dampener, after two fatal plane crashes carrying 737’s Max 8 jet. The 737 Max 8 was the first to take off in the Boeing’s 737 Max family, and this engine which spells out classic body, spacious seats, LED inside roof, silent engines and highly advanced system has now become least favorite. Reason pilots are finding it difficult to fly, and two crashes have cost many lives. This has led many customers ban the Boeing 737 Max jets, with that said, domestic airlines SpiceJet and Jet Airways are among them. Now because SpiceJet and Jet Airways have quite a hefty number of 737 Max, the grounding will put an effect in their earnings. While these two airlines will be struggling, it is now clearly expected that another airline namely Indigo will be a winner with more passenger growth and hence good profit ahead.

What happened to Boeing 737 Max?

Two airlines,  first Lion Air Flight 610 in October 29,2018, and second Ethiopian Airlines Flight 302  on March 10,2019, crashed just few minutes after take off resulting in with no survivors. Similarities between these two crashes were that, both crashed within few minutes of take off, both pilots struggled to gain altitude, both planes ascended and descended several times before nosediving.

While the investigations are still going on of both the airlines, Boeing 737 Max has been grounded from countries like like China, South Africa, Morocco, Poland, Ethiopia, Singapore, Indonesia, Netherlands, Mongolia, Argentina, Cayman Island,  Iceland, Ireland, France, Malaysia, Germany, Oman, UK and India have grounded this jet.

Impact to SpiceJet and Jet Airways!

Jal Irani and Vijayant Gupta analysts at Edelweiss Securities said, “We expect yields to remain strong as on the supply-side not only would Boeing 737 Max additions remain frozen in the foreseeable future, JetAirways has permanently sold 16 of its owned planes in addition to short-term grounding by lessors.”

The duo at Edelweiss added, “ We believe that: 1) SpiceJet has the highest sensitivity to EBITDAR with impact of 27.7% for FY20E followed by Jet Airways at 12.8%. If the problem persists, competitors may eat into their market shares. 2) That said, the impact as such is likely to be diluted as yields are already up notably quarter to date given large-scale flight cancellations at Jet.”

Edelweiss cited a quote of Yatra.com CEO Dhruv Shringi who said, although domestic PAX growth slowed sharply to 9.1% YoY in January 2019 from 12.8% YoY in October–December 2018, passenger fares have already risen sharply by 15% Ytd even prior to the 737 Max groundings, and are poised to rise even further.

That means, SpiceJet and Jet Airways due to shortage of aircrafts in their ambit, will be forced to charge costly fares ahead. This is not a good news for passengers, and here Indigo comes as a saviour.

A win-win to Indigo!

Not having a Boeing 737 Max, has become quite positive for Indigo airlines. However, Indigo also suffered similar fate with its A320 Neos engine which were grounded heavily last year as per DGCA guidelines. But unlike Boeing 737 Max, the impact of Indigo’s A320 engine was not much severe.

In current scenario, Indigo’s duration of flights carrying A320 NEOs engine has been restricted, and even Pratt & Whitney require frequent checks of the engine, yet the entire fleet was not grounded. Hence, Indigo managed to recover from this drawback.

On the other hand, Jet Airways which is already struggling to keep its nose in air, has no option left. The airline has been grounding many fleets since last year, due to cash shortage and default debt repayment.

Meanwhile, SpiceJet which was still better placed in the midst Jet Airways crises, is now facing its own with Boeing 737 Max. Grounding of Boeing 737 Max will mean lesser fleet availability with the airline and hence costly fares. This will divert passengers toward Indigo in its own way.

In analysts at Edelweiss view, “In the long run, Jet shall have the highest proportion of 737 Max aircraft. Jet shall be impacted the most in the long run given that only 70 of its total fleet of 120 aircraft are currently operating after the company floundered. Indigo’s recently enhanced focus on international routes after it received 16 A320 Neo in Q3FY19, is also likely to hurt Jet Airways the most.”

The analysts further added, “ We believe Boeing is likely to compensate SpiceJet and JetAir, which would prevent their earnings from a major breakdown—similar to the way Indigo was compensated for by P&W/Airbus for engine issues.”