From being a businessman`s assistant to a celebrity`s accessory, BlackBerry phones -- initially manufactured by Canada-based Research In Motion (RIM) -- slipped into oblivion when big-screen Android smartphones and iPhones came on stage, eclipsing the all-QWERTY handsets. 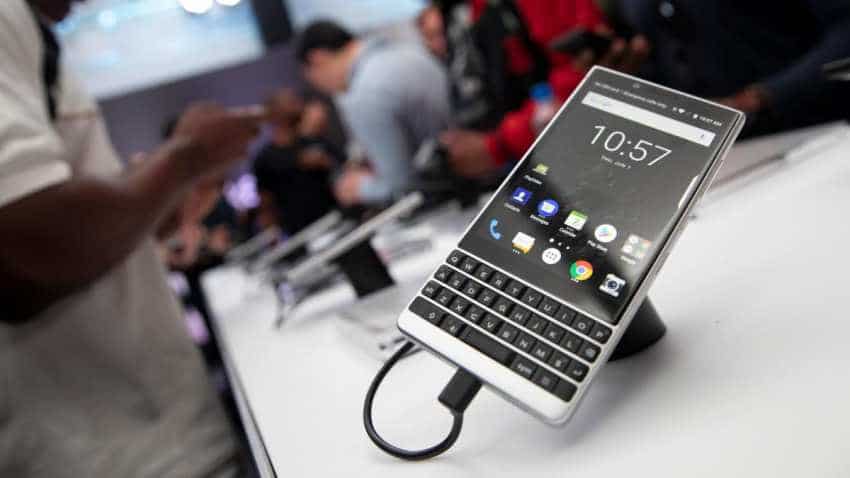 From being a businessman`s assistant to a celebrity`s accessory, BlackBerry phones -- initially manufactured by Canada-based Research In Motion (RIM) -- slipped into oblivion when big-screen Android smartphones and iPhones came on stage, eclipsing the all-QWERTY handsets.

Optiemus Infracom Ltd -- the firm that now owns the rights to manufacture and sell BlackBerry-branded smartphones in India -- attempted to break the jinx with BlackBerry "KeyOne" last year which did fairly well. It has now launched the 6GB RAM + 64GB internal memory BlackBerry KEY2 in India for Rs 42,990 -- essentially a successor to KEYOne and the only smartphone in the market that sports a physical QWERTY keyboard.

Here is what we think about the efforts to resurrect a physical keyboard device in the big-screen era.

KEY2 has a premium soft leather-textured rear, to make sure the device does not slip off smooth surfaces and hands easily. Above the humble BlackBerry logo is the 12MP+12MP dual rear camera system with 2x optical zoom, which makes it the first BlackBerry device to come with a dual primary camera set-up.

The dual camera set-up can shoot up to 2X zoom and bokeh portrait shots.

We especially liked how the 8MP snapper churned out some good selfies. The bokeh effect was bang on but the colours looked a bit over-saturated on certain occasions.

Unlike its predecessor, the Key2 houses all the keys, including the volume rocker, BlackBerry convenience key and the textured power button on the right side. All the keys had great tactile feedback. The device is powered by a Qualcomm Snapdragon 660 chipset which, honestly, cannot be compared with the flagship smartphones out there that mostly have the powerful Snapdragon 845 processor.

The power management is definitely where the Key2 scores. The chunky 3,500mAh battery ensured we had enough power to last close to two days on a single charge.

The battery also supports QuickCharge 3.0 technology that let us fire up the Key2 from 0 to 50 per cent in nearly half an hour.

The 4.5-inch LCD screen is exactly of the same size that we saw in the BlackBerry KeyOne in 2017.

We did not have any problem in viewing the screen under direct sunlight and it did the job for us. However, AMOLED fans are going to miss in this phone the punch and brightness they are used to.

Below the screen are three back-lit capacitive navigation keys.

A major USP of the Key2 is the QWERTY keyboard, which has been "inspired" by 2011`s BlackBerry Bold 9900. The keyboard is a beautiful matte this time and larger in size, which would especially suit those with thick fingers or eager mobile typists. The smartphone ships with Android 8.1 Oreo Operating System with its own little tweaks.

A nifty addition is the "privacy locker", which is essentially a fingerprint-protected app that lets users store sensitive files and even the apps that they want to keep away from prying eyes.

We were disappointed by the dynamic range of the primary dual camera. The images came out without details and there was visible amount of noise.

Low-light photography results were not good either. The camera churned out grainy photos in dim light.

Conclusion: The device stands out amid big-screen, glass-bodied smartphones but, clearly, this is not for everyone.

Key2 belongs to the niche category and would definitely appeal to those looking for a physical keyboard with a dash of nostalgia.