PM Narendra Modi is known for taking many initiatives, and one such initiative is Cashless India. 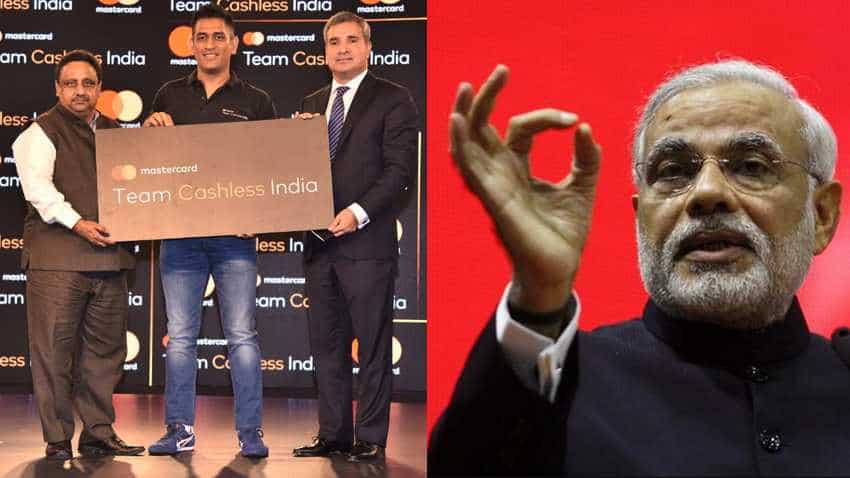 What's the plan? How it will build Cashless India? ALL DETAILS HERE
Written By: Prashant Singh
Edited By: Harish Dugh
RELATED NEWS

PM Narendra Modi is known for taking many initiatives, and one such initiative was Cashless India. Now, Mastercard and Mahendra Singh Dhoni have come together to build 'Team Cashless India'. According to Mastercard, the nationwide initiative aims to strengthen acceptance of digital payments among merchants.

Over the last few years, digital payments in India have grown substantially. In FY19, the country registered 31.34 billion retail digital payments. Further, the Ministry of Electronics and Information Technology (MeitY) has set a target of 40 billion digital transactions for FY 20. However, around 90 percent retail payments are still in cash.

What's the plan? How it will build Cashless India?

-Mastercard, along with legendary cricketer Mahendra Singh Dhoni, has announced the launch of a nationwide initiative to accelerate the acceptance and adoption of digital payments.

-Titled ‘Team Cashless India’, the initiative brings consumers and merchants to the forefront of the digital payments dialogue.

-The campaign encourages all Indians to nominate one or more merchants who currently do not accept digital payments.

-Mastercard will work together with Confederation of All India Traders (CAIT), acquirer banks and fintech companies to support nominated merchants to deploy digital payments acceptance infrastructure.

Want to be part of it? Do this

To take part in ‘Team Cashless India’, anyone can either nominate merchants online or give a missed call to 9016861000.

-Mastercard will also conduct an outreach program across multiple cities to educate merchants on the benefits of accepting digital payments and to provide a platform for consumers to nominate merchants.
-These nominations are expected to create a social movement for making India a cashless society. To garner support for the movement, M.S. Dhoni will interact with merchants and encourage them to 'bat' for a cashless India by accepting digital payments.

Talking about the initiative, Mahendra Singh Dhoni said, “Having been brought up in a small town, I relate to the challenges due to the lack of digital infrastructure. I am truly inspired by Mastercard’s commitment to building a society where everyone has access to safe, secure, and seamless digital payments. It is a progressive journey and requires extensive teamwork.  Through Team Cashless India, I would like to invite every Indian consumer and merchant to become a part of this team and play their part in India’s evolution as a digitally empowered cashless society.”

Praveen Khandelwal, National Secretary General, CAIT said, “CAIT is acknowledged as a national voice for merchants and traders. We are excited to be a part of Mastercard’s initiative to educate merchants about the benefits of digital payments and implement it for their business. This will not only enhance the convenience and safety of payments but also create new business opportunities for merchants, increasing their contribution to the Indian economy.”

Elaborating on the initiative, Ari Sarker, Co-President, Asia Pacific, Mastercard said, “Over the years, Mastercard has invested continuously and worked tirelessly to strengthen acceptance of digital payments amongst merchants, especially those in tier 2 and 3 cities, as they are the real drivers of India’s economic growth. This exciting initiative brings together Mastercard’s commitment to Digital India and Mahendra Singh Dhoni’s representation of a progressive ‘Bharat’. Mastercard believes Team Cashless India will play a vital role in engaging consumers and merchants to propel India’s transformation as a cashless economy.”