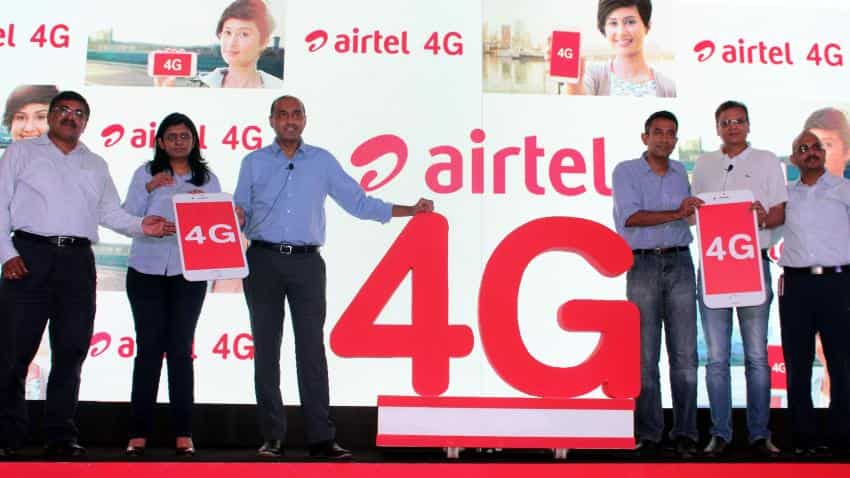 The company in FY17 has hardly given any returns to its investors. Photo: IANS
Written By: ZeeBiz WebTeam
RELATED NEWS

Telecom major Bharti Airtel is set to announce financial results for the quarter ended on March 31 today. The last fiscal was surely a roller-coaster rise for the company. Despite jolted by Reliance Jio entry in the telecom sector, Airtel left no stone unturned to regain its market share.

The war with Jio has already bitten a lot of profit of Airtel which could be seen in the previous quarters. In the last quarter, or Q3FY17, Airtel's net profit dropped 55%, at Rs 503.7 crore as against Rs 1,108 crore in the same period of last year.

The telecom operator had said that its consolidated revenues for the given quarter stood at Rs 23,336 crore, lower by 3% as against the same period of last year and 5.3% sequentially.

Moreover, the company had also mentioned that price war with Reliance Jio has hurt business. It said, "India revenues for Q3’17 at Rs 18,013 crore grew by 1.8% Y-o-Y. Slowdown in Mobile revenue growth primarily due to free voice and data offering by a new operator."

What experts have forecasted?

According to Motilal Oswal research report, the company's consolidated revenue is expected to report a drop of 4.7% on quarter-on-quarter basis and 10.9% on year-on-year basis to Rs 222.4 billion, majorily impacted by Jio's free offers.

Further, the report mentioned that the consolidated net profit is expected to grow by 34% on q-o-q basis to Rs 6.8 billion, but decline by 49% on y-o-y basis.

On the other hand, Edelweiss in its report said that Bharti's India and South Africa business segment likely to report 3.4% QoQ decline in revenue to Rs 173.7 billion with the 6.2% and 3.8% voice and data volume growth offset by the 9.8% and 16.2% realisation drop, respectively.

Having same view as Motilal Oswal, the Edelweiss research report said that the consolidated revenue is expected to decline 2.6% QoQ to Rs 227.2 billion with 210 bps decline in EBITDA margin (34.2%).

However, it said that PAT is expected to slump 63.9% YoY to Rs 4.76 billion. FY18 capex guidance, trajectory of churn and realisations, traction in 4G business and update on payment bank will be key monitorables.