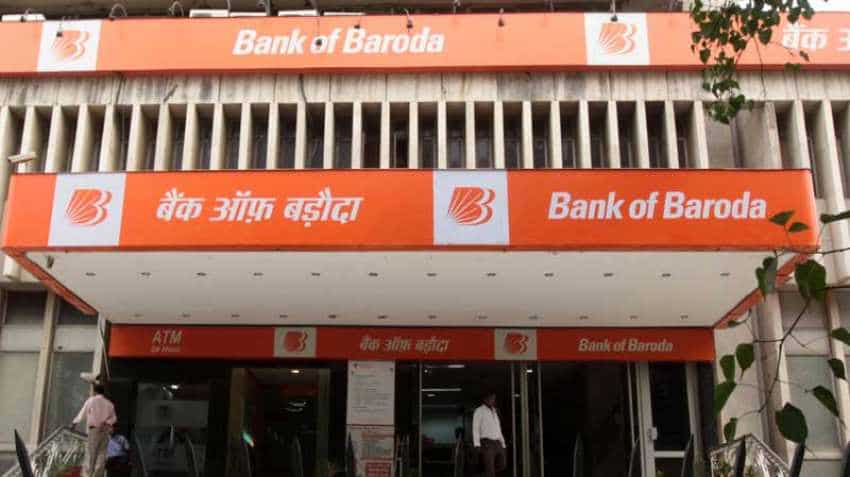 BOB has an employee strength of 56,361, which will take the combined entity strength to 85,675 employees. Image Source: PTI
Written By: Manju AB
RELATED NEWS

The proposed merger of Vijaya Bank, Dena Bank and Bank of Baroda will lead to closure of branches and job losses.

This is "inevitable", say sources, as both Bank of Baroda and Dena Bank branches overlap in Gujarat and Maharashtra.

BOB has an employee strength of 56,361, which will take the combined entity strength to 85,675 employees. 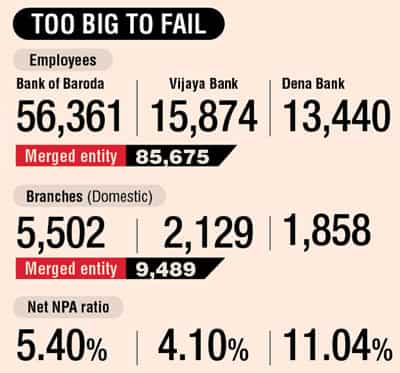 BOB chairman and managing director PS Jayakumar in a letter to employees said the merged entity will provide a vast opportunity to accommodate all the employees, while Narayanan, Vijaya Bank chairman and MD, said the bank is expecting a large workforce to retire by 2022 which would take care of redundancies.

On Monday, finance minister Arun Jaitley had assured the employees of the banks that there would not be any job loss.

The employees of all three banks are up in arms against the merger claiming that it would derail the resolution of bad loans and lead to loss of employment. The three bank managements say options to find solutions and tackle the Rs 10 lakh crore of non-performing assets (NPAs) were limited.

The Boards of the three banks will meet shortly to decide on the swap ratio of the merger.

The share price of Dena Bank, weakest of the three, rose sharply by 19.75% to close at Rs 19.70 with the market expecting its performance metrics to improve after the merger. Dena Bank, which is one of the banks under prompt corrective action (PCA) of the Reserve Bank of India (RBI), has an embargo on lending activities since April 7, 2018. Dena has the highest NPAs among banks with 22% of its advances being non-performing assets.

Sankara Narayanan, chairman and managing director, Vijaya Bank, told DNA Money, "The customers get a big choice with BOB having foreign branches. Vijaya Bank customers will have an access to external commercial borrowings (ECBs). It will help build a big treasury. We have a deposit base of Rs 1,70,000 crore, of which 30% is treasury operations. With a combined business of Rs 14.5 lakh crore, we will be the third largest banking entity after the State Bank of India (SBI) and HDFC Bank."

A Delhi-based think tank Centre for Financial Accountability (CFA) said in a note, "Not just commercially unviable, but a three-way merger among banks with the different administration will only result in administrative chaos.

Mergers of many banks to make 4-5 big banks have been on the cards since this government came to power, believing they will be 'too big to fail'. It is paradoxical that this merger is proposed just on the 10th anniversary of the fall of Lehman Brothers, the fourth largest investment bank in the US."

"The government's plan to merge three public sector banks will be credit-positive as it will provide efficiencies of scale and help improve the quality of corporate governance for the banks. We expect the merged entity will require capital support from the government, otherwise such a merger would not improve their capitalisation profile," Moody's Investors Service VP (Financial Institutions Group) Alka Anbarasu said in a note.