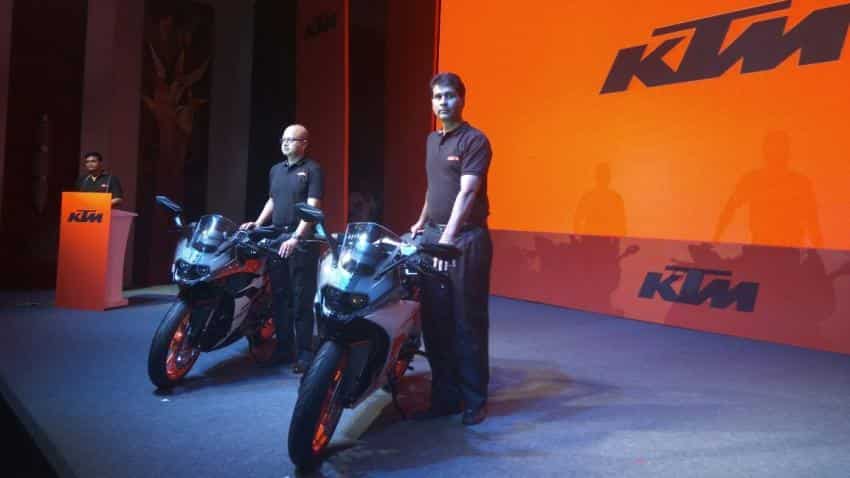 Bajaj Auto that markets and manufactures the premium bike brand KTM, is making a second attempt to enter Indonesia, this time pillion-riding on the number one European bike brand. Pic: Zeebiz
Written By: PTI
RELATED NEWS

Bajaj Auto that markets and manufactures the premium bike brand KTM, is making a second attempt to enter Indonesia, this time pillion-riding on the number one European bike brand.

Bajaj owns 49 per cent stake in the Vienna Stock Exchange-listed KTM since 2013. The Pune-based company had started investing in the Austrian bikemaker since 2007 when it was struggling with cash flow issues and since then has been manufacturing the KTM bikes at its Chakan, Pune plant and also meeting all its export demand except for the European markets.

"Our team has just returned from Indonesia after successfully launching the KTM bikes there. And the response has positively surprised us. It's more surprising as our first attempt there with the Pulsar was nothing to write home about.

"With the kind of initial response we have received, we are pretty sure that can notch up sales of anything between 5,000 and 10,000 units per annum there," Bajaj Auto managing director Rajiv Bajaj has said.

It can be noted that the country's most profitable bikemaker had entered Indonesia around 2005 with its popular Pulsar but had burned its fingers as the one of the largest twowheeler market in Southeast did not respond positively.

When asked about this, Bajaj said, each market is different and their failure was more to with the brand image of Bajaj there than with the product per se.

"Indonesia by and large is a Japanese outpost when it comes to automobiles and especially for bikes and the market there is more acceptable to Japanese brands and other foreign brands, he said, adding "we thought we could make it but we could not. But the response we have received for the KTM bikes has simply surprised us on the upside."

When asked whether Bajaj will increase its stake in KTM further -- in 2013 they were in talks to take a controlling stake, Bajaj ruled out any such plans, saying "who manages the company on a daily basis is not important.

"We are perfectly happy with our investments in KTM and not interested in managing the company but further building on this association. And the launch in Indonesia is an example of this growing relationship.

I am happy being a financial investor and not interested in managing the firm."

Bajaj said since the association with KTM, which is completing a decade this month, Bajaj has sold over 1 lakh KTM bikes in the domestic market. In 2016 alone, it sold over 37,000 KTM bikes, the sales of which have been clipping at 46 per cent CAGR, since then.

In April 2013, it can be noted that there were reports that Bajaj was keen to pick up at least 55 per cent stake in KTM. Ultimately, it picked up just 2 per cent more increasing its stake to 49 per cent through

Bajaj started picking up equity in KTM in 2007 by buying a 14.5 per cent stake for about Rs 300 crore and has since been picking up shares from the open market.

Bajaj invested in KTM at the peak of the financial crisis in Europe in 2007 but it has turned out to be a saviour for the Austrian company as this led it to emerge as the biggest European bikemaker by 2012.

Probiking is a special marketing division that Bajaj has created to develop the racing and sport biking segment, which has clipped at 20 per cent in 2016 against the two- wheeler industry growth of 4.3 per cent in the year, he added.

"The KTM brands are so localised that as much as 95-98 per cent of the parts are sourced from domestically," he said.

When asked whether Bajaj will look at local assembly of the KTM brands in Indonesia, Nandi told PTI that "such a development is unlikely since our mandate is to meet the global demand from our Pune plant."

Bjaja-KTM is planning to launch the Husqvarnam which they had bought from BMW in 2013, shortly at Chakan, but the company refused to comment.

Over the weekend Bajaj-KTM launched two new KTM variants -- RC 390 and RC 200, and said it would open 125 more exclusive outlets to take the total number to 450 next financial year as it sees massive spike in demand.

KTM is the dominant player in the entry-level sport biking segment with a little over 33 per cent market share in a segment that has seen a volume of around 1,20,000 units last year and has close to 10 players including Yamaha, Honda, Motorad, Harley Davidson and Suziki, among others.