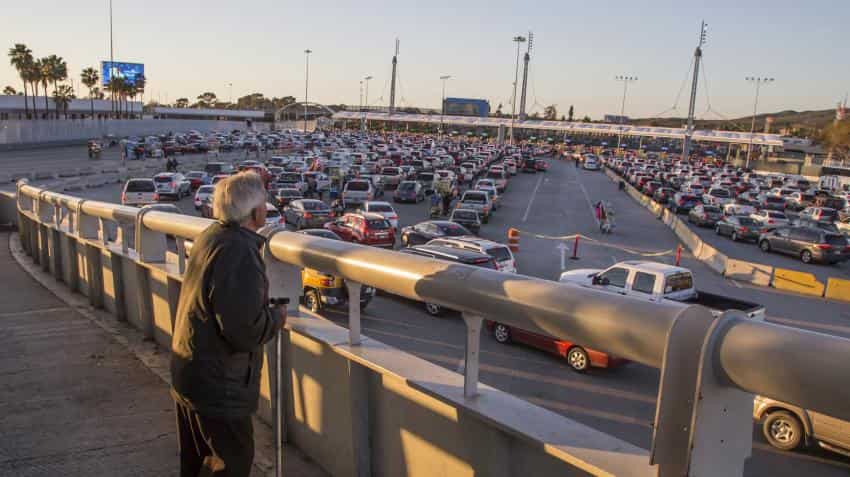 The automobile industry was in for a shock on Wednesday as the Supreme Court passed the judgment to ban the sale of Bharat Stage (BS) III vehicles from April 1.

While the automobile industry estimates the loss to be tune of Rs 20,000 crore, the Society of Indian Automobile Manufactures (SIAM) says unsold BS III vehicles are worth Rs 12,000 crore.

This verdict leaves automobile industry with nearly unsold 8 lakh vehicles. Two-wheelers have the highest inventory of BS III vehicles of over 6 lakh vehicles, followed by 96,000 commercial vehicles and around 40,000 three-wheelers, according to SIAM figures submitted to SC.

Vinod Dasari, President of SIAM in a CNBC TV18 report said that while they will honour the Supreme Court verdict, it is frustrating for the automobile industry as it comes just 3 days before the deadline.

Rajiv Bajaj, MD of Bajaj Auto argued that the automobile industry should not get intimidated by the Rs 20,000 crore figure and that it is time for them to not sit on the fence. "The notice was very clear to us that we had to start manufacturing BS IV vehicles from last year. Some manufactures may have postponed to save costs, but this has only ended costing more for them,” he said.

The main question now remains what will automobile manufactures do with all this unsold inventory?

Dasari who is the Managing Director of Ashok Leyland said that they don't have much inventory left. “The unsold inventory will be sold in export markets,” he added.

Bajaj said they have a little BS III inventory pending and will export it. “My dealers and vendors have some inventory with them, we will compensate them for it. We will export it to other markets. We will take cars of every last unit back,” he said.

Vikram Kirloskar, Chairman and MD of Kirloskar Group part of JV Toyota Kirloskar said that they have all BS IV vehicles and do not have any BS III vehicles.

Pawan Manjul, Chairman & MD of Hero MotoCorp said, "Hero MotoCorp recognising the need of the hour, carefully planned a proactive move to switch from BS III to BS IV compliant products across all our range well in time and have been producing only BS IV compliant products since one month before the given deadline. We have reduced our BS III ​inventory significantly in the past few months with the aim to minimize our stakeholder losses. However, environmental protection will take precedence over temporary financial benefits."

Tata Motors in a statement said, "Tata Motors is assessing the impact of the Order on the BS III inventory that are lying unsold on April 1, at both company and dealerships."

It further said, "The decision by Supreme Court to ban sale of all BSIII vehicles from April 1, 2017 is an unexpected and unprecedented move that will have a material impact on the entire automotive industry, OEM’s and dealer network. The industry had planned the current transition into BSIV in line with the accepted past practice of stopping production of earlier emission standard vehicles effective from the transition date. In the context of this previous experience, this decision by the apex court is a ‘penalty’ to the entire automotive industry."

Bajaj Auto, Hyundai, Daimler India and Toyota Kirloskar Motors has been for the ban of BS III vehicles from April 1. While Tata Motors, Hero MotoCorp, Honda, Yamaha, the dealers’ body and SIAM have all been opposed to the ban on sale of BS III vehicles post-March.

One of the biggest to be hit by the apex court's decision is Hero MotoCorp whose unsold BS III vehicle inventory amounts to Rs 1,600 crore.

We did not receive a response from Tata Motors, Eicher Motors, Mahindra and Hero MotoCorp at the time of publishing this story.

Subrata Ray, Group Vice President, ICRA said that it the Supreme Court verdict will impact commercial vehicles segment the most as it has around 75,000 units and the potential costs associated with inventory re-call (from dealers) and upgradation to BS-IV norms is higher. "Further, in order to liquidate existing stock, CV OEMs will also be pushed to offer higher discounts, which continue to be at elevated levels for the past few years. The extent of loss for OEMs will be a function of inventory-mix. For instance, relatively older or slow moving models may be difficult to liquidate. In ICRA’s view, OEMs would also explore options to export vehicles to near-by markets, where emission norms have not progressed to Euro IV or equivalent. Apart from these factors, ICRA believes that the low availability of BS-IV compliant vehicles could also hurt CV sales in the upcoming month as OEMs were expecting strong pre-buying of BS-III vehicles in Q4 FY2017," he said.

Rucha Ranadive, Associate Economist of Care Ratings said, "We do estimate that this will be valued (of unsold inventory of vehicles) at Rs 14,000 crore and in case the companies are able to push through sales aggressively in the next two days, this value can come down to Rs 12,500 crore. While one option is to export these vehicles, based on past trends, it would take between 3-10 months to exhaust these stocks especially for CVs. There is a high carrying cost of such capital which can range between Rs 800-1,000 crore depending on the phasing of these exports sales."