During an interview with Dimpy Kalra, Zee Business, Mr Adhia said, “Atul Auto has introduced the primitive format of e-vehicle, Atul Elite, powered by the lead-acid battery and our R&D team is working on regular e-auto which will be launched soon in the Indian market”.  Edited Excerpts: 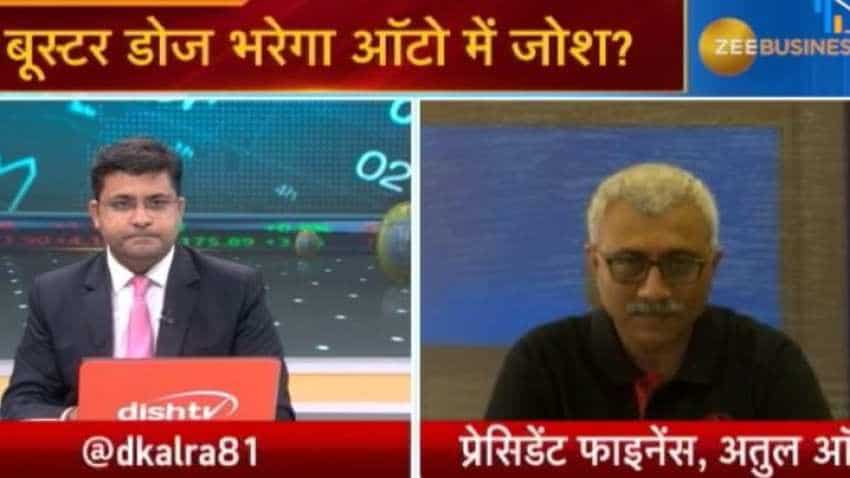 The first quarter has remained flat for us and we are looking for some positivity after the second half, says Jitendra Adhia, President Finance, Atul Auto.
Written By: ZeeBiz WebTeam
Edited By: Harish Dugh
RELATED NEWS

The first quarter has remained flat for us and we are looking for some positivity after the second half, says Jitendra Adhia, President Finance, Atul Auto. During an interview with Dimpy Kalra, Zee Business, Mr Adhia said, “Atul Auto has introduced the primitive format of e-vehicle, Atul Elite, powered by the lead-acid battery and our R&D team is working on regular e-auto which will be launched soon in the Indian market”.  Edited Excerpts:

Q: Update us on the current auto sales position?

A: If I talk of the current period, then July onwards particularly Atul Auto Limited is just looking for some kind of positivity after the second half. Fortunately, the first quarter went flat for us in total numbers, however, we grew in the domestic market. As far as the complete industry is concerned then there has been a pressure on the volumes since the beginning of the year. The commercial vehicle segment is directly connected with retail demand and infra development. It seems, the first half will remain under slight pressure but post-H2, it is expected that there will be a positive movement in it. As far as Atul Auto is concerned, we have a complete product range and our market, then apart from the domestic market, we have also ventured in export, where our products are getting a good response. However, we are at the seeding stage but will make additional efforts this year to end the year with positive numbers as compared to last financial year.

Q: While going through your product range, from commercial to passenger to cargo, I found they are either diesel variant or CNG variant but failed to find anything in e-vehicle variant in it. So, do your company has any intent to enter the segment or not?

A: We have already introduced the primitive format of e-vehicle, but, this primitive format is powered by lead-acid battery, whose sustainable future should be looked differently. However, we are learning this market and have introduced a product, Atul Elite, in the segment. The product is available in commercial cargo and commercial variants. As far as, regular e-auto is concerned then our R&D team is working on it and an e-auto will be launched soon in the Indian market.

Q: You have said that the e-auto will have a lead-based battery but there are talks that lithium-based batteries should be available to keep people away from the problem of changing batteries at regular interval. But I feel that lead’s life is slightly less as compared to lithium’s, which is slightly more but you are working on lead?

A: That is what I have said that the lead-acid batteries have low life and it requires more time to get charged. Whereas, we will shift to lithium with the introduction of e-auto, which will be powered on a lithium-ion battery, with a greater number of charging cycles and less time to get charged. However, the cost structure of the two then lithium-ion is quite expensive, but I feel that the government is also contributing to it by subsidising it. Over a period, we will be able to compare then with the conventional auto. Both sides, the manufacturer and the government, are trying to promote it in which the manufacturers are trying its best to economise it and the government is promoting it and is keen to promote it. I feel a good combination with the right kind of product will be there in the market in the next 6-12 months.

Q: How are you balancing your balance sheet amid rising raw material prices and challenging atmosphere regarding sales?

A: On behalf of Atul Auto, I would like to admit it fairly that our price fluctuations are very low. If viewed historically, then the prices in the three-wheeler segment are revised once or twice in a year. But the raw material pressure is a permanent thing and it inevitable for all the players, however, if you have a look at our first-quarter results then we was able to improve our EBITDA. As far as, additional sales discount is concerned then we haven’t launched any special scheme apart from the regular promotional activity yet.

Q: You are also present on global parameters, so do you have any plan to go for an international acquisition or plans to improve sales number in the international market, if yes, then how you hedge the currency fluctuations?

A: This is a start for us, and I would like to inform you that our company doesn’t have any acquisition plan in the short-term. But we are expanding our sales distribution network and have created our footprints in 25 countries since the last year. This means that we identified our distributors in 25 other countries beyond India and we will have a major focus on product penetration. As far as, the acquisition is concerned then there is nothing on the card.