Shares of Apple dropped nearly 2% to $144.75 after the company also forecast current-quarter revenue below estimates. 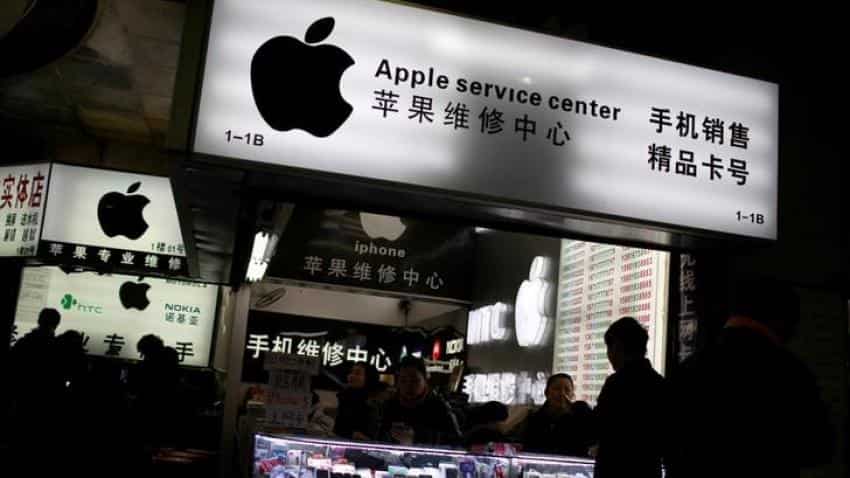 Customers and sales persons are seen at an Apple maintenance service store at a mobile phone market in Shanghai. Photo: Reuters
Written By: Reuters
RELATED NEWS

Wall Street looked set to open lower on Wednesday, weighed down by Apple after the world's most valuable company by market value reported a surprise fall in iPhone sales.

Shares of Apple dropped nearly 2% to $144.75 after the company also forecast current-quarter revenue below estimates.

"The market is taking its cue from Apple," said JJ Kinahan, chief market strategist at TD Ameritrade in Chicago.

Anadarko Petroleum fell 9.1%. The stocks were among the biggest drags on the Nasdaq and S&P.

Strong corporate reports so far had resulted in estimates for first-quarter profit growth at S&P 500 companies increasing to 13.9 % as of Tuesday, from an estimate of 10.4 % growth two weeks back, according to Thomson Reuters I/B/E/S.

The strong earnings have also helped offset some fears about geopolitical tensions in the Korean peninsula, the lack of progress by the Trump administration in enacting its economic agenda as well as mixed economic data.

"Strong earnings are still driving the market. Not only are earnings good, the CEOs are painting a picture of continued earnings growth and this helps trump some of the other factors," said Kinahan.

Ten of the 11 major S&P 500 sectors were lower, with the technology index's 0.55% fall leading the decliners.

Data last week showed the US economy grew at its slowest pace in three years in the first quarter. Since then, automakers have reported a drop in vehicle dales for March, which along with the drop in iPhone sales, have added to nerves.

The Federal Reserve could address GDP when it issues a statement at 2 pm ET, at the end of its two-day meeting on interest rates. While the central bank is expected to hold interest rates steady, it may hint it is on track for an increase in June.

The data come ahead of the US Labor Department's more comprehensive non-farm payrolls report on Friday, which includes both public and private-sector employment.

Yum Brands rose 2.3 % to $67.81 after the company's quarterly profit came in better than expected.

Delphi Automotive rose 8.2 % to $84.89 after it gave a robust full-year earnings outlook.