Balram Singh Yadav, Managing Director, Godrej Agrovet Ltd, talks about Q4FY21 numbers, business outlook, expectation from monsoon, growth areas, the surge in commodity prices and the value unlocking strategy of the company among others during a candid chat with Swati Khandelwal, Zee Business. 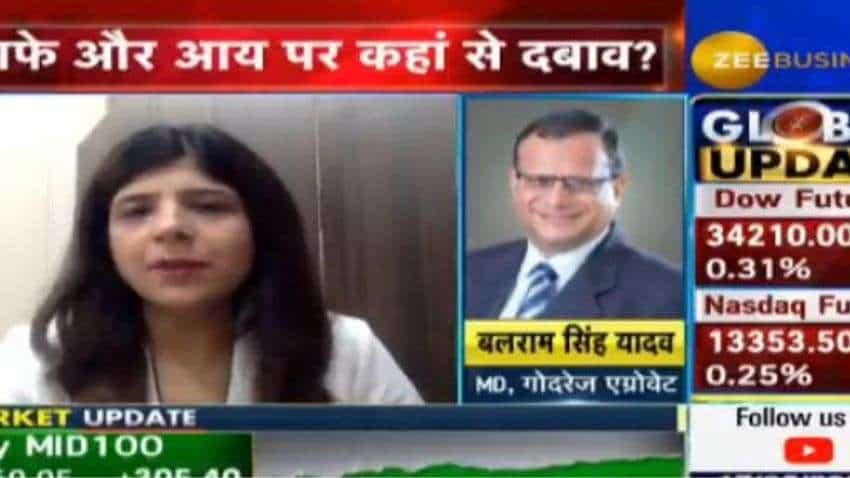 Q: Q4FY21 Numbers are more or less flat compared to last year. However, the margins are stable despite a dip in topline what led to this? Also, please share the overall highlights of the quarter?

A: In this, you will have to look a little bit closer. Our topline has indeed declined by 10% in FY21 as compared to FY20. It happened due to the shrinkage of the market, you would have seen that consumption of almost everything has reduced. Similarly, the consumption of animal protein has reduced and due to which our turnover has dropped. But, if you will look at the profit closely then there is a 60% growth in the operating profit. Last year in FY20, there was a profit of around Rs 68 crore and it came due to a real estate sale and it stands around Rs 4-5 crore this year. So, if you compare operating profit to operating profit, then we have shown a growth of around 59% and all of our businesses have performed better in 2021 as compared to 2020.

Q: Which segments have performed better and going forward what kind of growth is visible? Monsoon forecast is good and due to it should we expect that business will be good?

A: Last year, maybe it is animal feed or poultry or pesticide, Astec Life Sciences, everyone has performed well. Performance has been a bit low in milk and oil palm plantation, there was not such profitability as we expected. It happened because if you look at it, the animal protein industry was hit hard last year which has continued even in this quarter. Almost one-third of the animal protein, maybe it is egg, chicken or milk, goes to institutional segments like hotels, restaurants, banquet and marriages among others, which was quite low last year and in this quarter it has gone down a lot in May as compared to the April. But despite that the profitability has increased because the raw material was positioned well, its costs went down, we reduced extra costs and increased efficiency, which will benefit us this year as well. As far as the coming future is concerned, it is true that a lot is dependent on monsoon and if monsoon remains normal then our Agri sector which includes pesticide, seeds, and fertilizers will be very good for the country. And, our pesticide business, the crop protection business will also be good. However, there is a place, where I still have a doubt and it is the animal protein industry because its consumption has reduced a lot due to the lockdown. But, last year, I have seen that as soon as the lockdown opens, the demand increased rapidly. I would like to inform you that there is not so much production as there will be a surge in demand. So, I think, animal protein will contribute a lot to the food inflation that will happen in the second and third quarter

Q: Soymeal & corn prices have surged to record highs recently. How does this impact the feed/animal protein business? Also, commodity prices are surging globally and you are the largest producer of palm in India. So, what is the price outlook?

A: The commodity prices, particularly, cereals, oilseeds and oils have surged a lot and the main reason for it is the Biden effect. President Biden has increased the biodiesel mandate a lot and a lot of cereals and oil is going into biodiesel production due to which the prices of these items are 30-60% higher as compared to the last year. And, I don’t think that this mandate will be withdrawn in the near future. So, in the next two-three quarters, I think, that whether it is oilseed or oil or cereal, its prices will remain more. Even you would have seen that the country has made record exports of wheat and rice this year. The main reason behind it is that the cereal prices are quite high in the global market. So, commodity inflation will be in place at least for the next two to three quarters. I do not think that some relaxation will be granted to the biodiesel mandate and if relaxation is not granted then there are no chances that the prices will be reduced.

A: We will have a focus on the animal protein value chain. Globally, the feed companies’ morphs into the animal value chains and have end-to-end control. So, we have to go in that direction, like we are in feed, chicken and milk and all these things will be integrated to emerge as a value chain in the coming time. This type of evolution has already happened in all the countries and before us, if you will look at the countries who are ahead of us in the countries of East Asia and Eastern Europe, they have seen this integration some 15-20 years ago. So, I hope animal protein value chains will be created even in India in the coming 5-10 years. Secondly, we have a strong play in agro-chemical in B2B business through Astec Life Sciences. And, you know that India has a good opportunity in agro-chemical under China + 1 strategy and availability of PLI scheme, we have turned competitive. Apart from this, the industry is growing 5-6% in the B2C business and we have been growing by 12-14% if you will have a look at the growth of the last five years. Most of the growth in the area is coming from new products, mainly from in-licensing products from Japanese companies. So, I think, there is a lot of scope in both of these business verticals and investment will continue in these two verticals. Besides, the business of oil palm plantation is an evergreen business and almost two-third of the edible oil that we consume in the country is imported. So, as much as oil palm will be produced will be less in the country. So, it is going to be the seller’s market at international prices rather than the buyer market.