The Amul MD further said that GCMMF is looking at sales turnover of Rs 27,000 crore during FY 2016-17 with a rise of around 18 per cent over the last year. 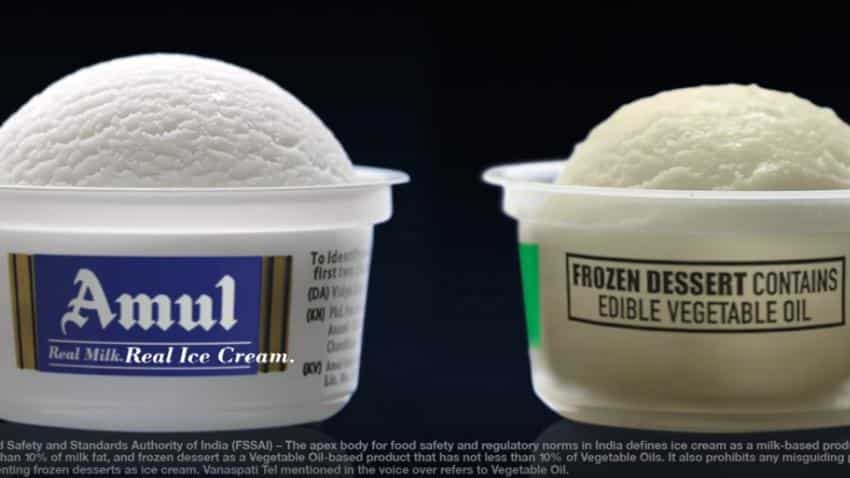 Sodhi said ice cream is made from milk fat while frozen dessert is made from vegetable fat. Photo: YouTube
Written By: PTI
RELATED NEWS

Gujarat Cooperative Milk Marketing Federation Limited (GCMMF), which sells its products under Amul brand, today defended its TV commercial for ice cream and accused HUL of resorting to "stunt to pressurise and frighten" it.

FMCG major Hindustan Unilever Limited (HUL) has moved Bombay High Court against Amul over the commercial, which suggests to consumers to buy Amul ice cream and not the 'frozen dessert' as the latter was made from vegetable oil and was not healthy.

"This is HUL's stunt to pressurise and frighten us into submission. But they don't know that we are backed by 36 lakh poor farmers who want to make consumers aware about the products they are buying," he said.

He further said HUL had dragged Amul to Advertising Standard Council of India (ASCI) last year objecting to the latter's move to distribute pamphlets on the same issue, but the ASCI ruled in its favour, saying that Amul's campaign "does not disparage the entire campaign of frozen dessert."

"FSSAI (Food Safety and Standards Authority of India) has named this category as frozen dessert. We thought of informing our consumers to check on the packet of the product to ensure if it is icecream or frozen dessert," he said.

"Even FSSAI allows us to inform our users about our products, and I don't think we have made any mistake... We have just informed consumers and left it for them to decide."

Amul is looking at Rs 1,000-1,100 crore market share in ice cream segment this year, he said. Sodhi said Amul had created a similar "awareness" campaign differentiating between butter and margarine, and is also planning to launch another campaign regarding cheese and cheese analogues.

The Amul MD further said that GCMMF is looking at sales turnover of Rs 27,000 crore during FY 2016-17 with a rise of around 18 per cent over the last year. The company is looking to expand its capacity in coming years and also launch new products in sweets and snacks, he added.

He said that GCMMF plans to invest Rs 2,000 crore for expansion in another two years.