It was only in October 2005 that the business transaction between Aircel and Maxis was finalised. 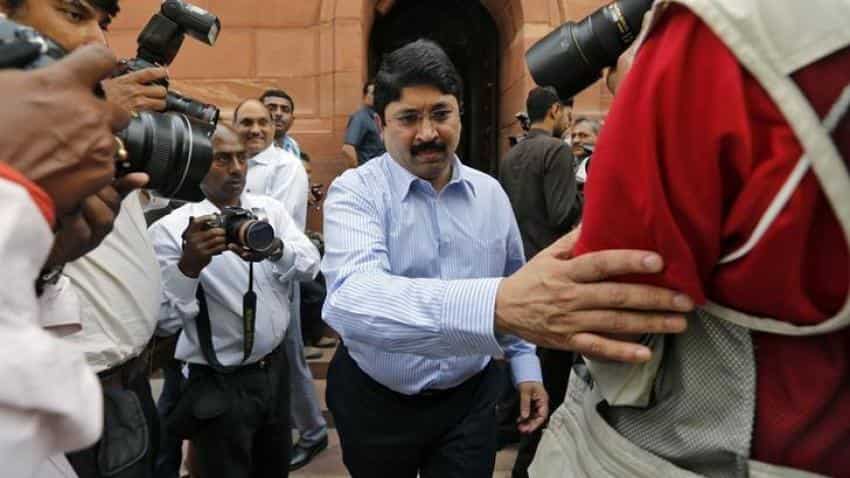 The court had summoned the six accused after taking cognisance of the ED's charge sheet. Photo: Reuters
Written By: PTI
RELATED NEWS

A special court will pronounce on Tuesday next its order on framing charge against former Telecom Minister Dayanidhi Maran, his brother Kalanithi Maran and others in the Aircel-Maxis deal case lodged by CBI and the Enforcement Directorate (ED).

Special Judge O P Saini, who was scheduled to pass the order today on framing of charge as well as on bail applications of the Maran brothers and other accused persons, deferred it to January 24, saying the order is yet to be prepared.

All the accused have denied the allegations against them made by the investigating agencies and have moved bail pleas.

During the arguments on the framing of charge, Special Public Prosecutor Anand Grover had claimed that Dayanidhi had "pressurised" Chennai-based telecom promoter C Sivasankaran to sell his stakes in Aircel and two subsidiary firms to Malaysian firm Maxis Group in 2006.

They were charge sheeted for alleged offences punishable under section 120-B (criminal conspiracy) of the IPC and under relevant provisions of the Prevention of Corruption Act.

The court had summoned the six accused after taking cognisance of the ED's charge sheet, saying there was "enough incriminating material" to proceed against them.

While arguing on the issue of framing of charge against him, Dayanidhi had claimed that during the time period in which the alleged crime was committed, as claimed by CBI, Sivasankaran was in talks with several companies to sell his stakes in Aircel.

It was only in October 2005 that the business transaction between Aircel and Maxis was finalised, his counsel had said.

His brother Kalanithi had also argued that CBI's claim was false and the complainant was himself eager for the business and that he was being falsely implicated in the case.

The court had on September 24 issued open warrants of arrest against Krishnan and Marshall on CBI's plea stating that summons issued to them could not be served.

It had also ordered that the trial against Maran brothers and two accused companies be segregated from that of those based in Malaysia -- Krishnan, Marshall, and two firms, Astro All Asia Network PLC and Maxis Communication Berhad, saying their appearance may take a long time which may lead to a delay in the proceedings.

During the arguments earlier, ED's special prosecutor N K Matta had claimed that there were money transactions which allegedly showed that SDTPL and SAFL had received Rs 742.58 crore as "proceeds of crime" from Mauritius-based firms in the Aircel-Maxis deal.

The agency had claimed that "proceeds of crime" amounting to Rs 549.03 crore and Rs 193.55 crore were received by SDTPL and SAFL, allegedly controlled by co-accused Kalanithi, through various Mauritius-based entities.

ED had earlier alleged before the court that Dayanidhi had generated funds worth Rs 742.58 crore through illegal means and there was sufficient prima facie material to proceed against him and other accused in the case.

It had then alleged that Dayanidhi had obtained "illegal gratification" of Rs 742.58 crore and the money was "parked" in the firms of Kalanithi by projecting it as untainted. ED had also claimed that Kalanithi was controlling both SDTPL and SAFL, where the money was infused through Mauritius-based companies.