Airbus sealed deals with big buyers for its latest passenger jet at the Paris Airshow on Wednesday, battling back a day after a surprise order by British Airways` owner for rival Boeing`s grounded 737 MAX jet. 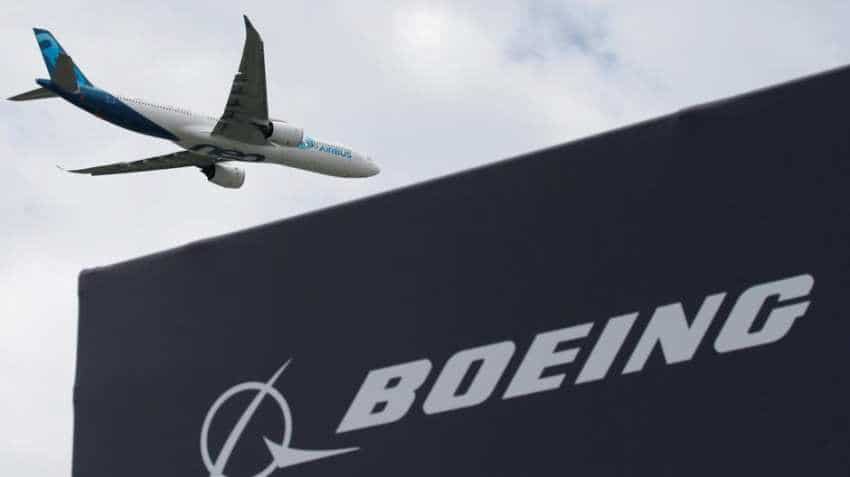 Airbus is aiming to carve out new routes for airlines with smaller planes and steal a march on Boeing`s plans for a potential all new jet for the middle of the market. Photo: Reuters

Airbus sealed deals with big buyers for its latest passenger jet at the Paris Airshow on Wednesday, battling back a day after a surprise order by British Airways` owner for rival Boeing`s grounded 737 MAX jet. Indigo Partners, the private equity firm of veteran low-cost airline investor Bill Franke, and American Airlines each signed up for 50 of Airbus`s new long-range A321neo jet, although some orders were converted from deals on other models.

Airbus, which has not given a list price for the A321XLR, launched the new plane on Monday, aiming to carve out new routes for airlines with smaller planes and steal a march on Boeing`s plans for a potential all new jet for the middle of the market.

The deals are a big vote of confidence in the European planemaker, a day after major customer British Airways owner IAG signed a letter of intent to buy 200 of Boeing Co`s 737 MAX jets, a model that has been grounded since March after two deadly crashes.

Asked about the IAG deal, Franke, who struck the largest-ever plane deal by number of aircraft with Airbus in 2017, called the A321neo the most efficient single-aisle jet. Franke`s Indigo Partners signed a memorandum of understanding to buy 32 of A321XLR aircraft and to convert 18 existing A320 family jet orders to the larger model.

The jets will be allocated to Hungary`s Wizz Air, U.S. carrier Frontier Airlines and Chile`s JetSMART, in which Indigo Partners owns stakes. Industry experts estimate the deal for the 32 aircraft could be valued at around $4.5 billion, based on a slight premium to the A321neo`s list price of $129.5 million, although most airlines get significant discounts.

American Airlines, the world`s largest airline by passenger traffic, said 30 of its A321XLR order were conversions of existing A321neo orders to the new version.
"It costs a little bit more for these aircraft ... (but they offer)... greater utility for us in the long run," American Airlines President Robert Isom said on a podcast, highlighting opportunities for new routes, higher efficiency and less complexity among its fleet.

Airbus also said it had reached a preliminary deal to sell 11 A321neos to Taiwan`s China Airlines, snatching the renewal of the airline`s medium-haul fleet from Boeing.
The deal signals intensified competition in Asia where Boeing this week predicted 40 percent of jets would be delivered over the next 20 years.

Airlines are rarely persuaded to switch to rival suppliers because of the costs of training and parts, but this week`s Paris Airshow has witnessed two such announcements as sold-out planemakers mount incursions to continue their growth.

In a further competitive twist, Boeing said on Monday it would take over the supply of spare parts for the remaining Airbus A320 fleet at IAG`s British Airways.

Boeing`s surprise deal with IAG on Tuesday enlivened a previously subdued air show, where the talk had been of the possible end of the aerospace cycle, given slowing economies and geopolitical tensions around the world - as well as Boeing`s 737 MAX crisis and a long-running corruption scandal at Airbus.

It was not immediately clear how many of the 200 aircraft eyed by IAG would wind up as firm orders and how many would be options, nor how it would affect Airbus`s presence at IAG, which placed an order for 14 A321XLR hours before the announcement.

"It`s a great coup, but for now it`s a communications coup as it`s a letter of intent. We will see what kind of deal lies behind it," a European industry source said.

Even so, Boeing was expected to try to capitalise quickly on the move and seek further support for the embattled MAX as it offers airlines other big packages at attractive prices.

Australia`s Qantas Airways said on Wednesday it would order 10 Airbus A321XLR jets and convert a further 26 from existing orders already on the planemaker`s books.
Airbus is also in talks with leasing company GECAS and U.S. airline JetBlue about potential A321XLR deals, sources familiar with the matter have said.

Airbus sales chief Christian Scherer said there was some softness in the market but did not see an increase in cancellations. He told investors he expected to win more orders for the smaller A220, formerly known as CSeries.

Both Airbus and Boeing are cushioned by thousands of orders for the single-aisle jets.

Airbus Chief Executive Guillaume Faury predicted a pickup in orders after a slow start to 2019. He voiced concerns about trade tensions and the growing risk of a no-deal Brexit.