Rakesh Jhunjhunwala owns over 8 per cent stake in Titan. Major portion of his portfolio is invested in the company, which is considered his favourite stock. 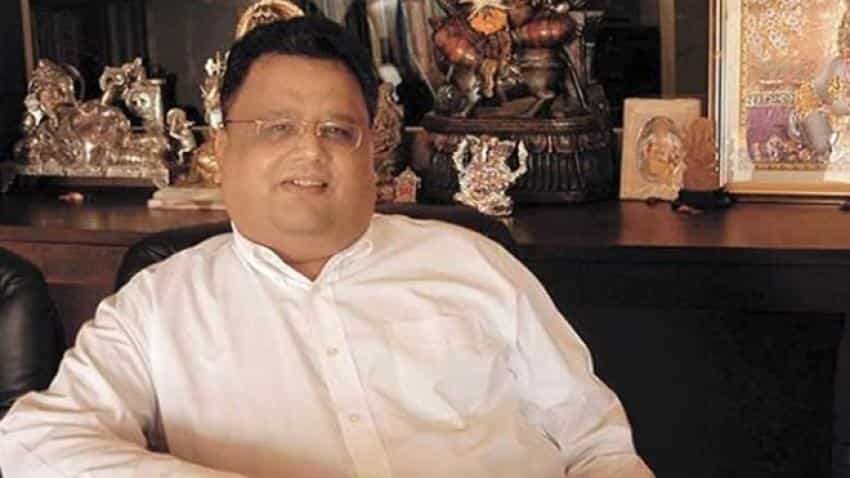 Among these five, Titan, PC Jeweller and Tribhovandas Bhimji Zaveri are listed on BSE and NSE, and have given mixed returns in the last one year.

Ace investor Rakesh Jhunjhunwala owns over 8 per cent stake in Titan. Major portion of his portfolio is invested in the company, which is considered his favourite stock.

In the March quarter, the Tata Group firm reported 70.86 per cent jump in consolidated net profit at Rs 304.41 crore. Brokerage Edelweiss Securities has a buy rating on the stock with a target price of Rs 1,160. "We envisage Titan to extend its growth run led by share gains, entry in new segments and retail expansion. Moreover, rising share of studded jewellery, cost optimisation and operating leverage are likely to aid margin. At 55x FY20E EPS, we arrive at TP of Rs 1,160. Maintain ‘BUY/SO’. At CMP, the stock is trading at 46.7x FY20E EPS," Edelweiss said in a results review report.

PC Jeweller share price, meanwhile, witnessed a roller-coaster ride on Dalal Street as rumours of promoters selling their stake in the company surfaced. The company is scheduled to report its March quarter numbers on Friday. The stock gained 10 per cent to hit its intraday high of Rs 210 in today's trade.

In the March quarter, TBZ reported 9.6 per cent SSG and Rs 7.04 crore PAT led by nearly 10 per cent volume growth and improved footfall in wedding season. TBZ management made a forecast of opening 15 stores in FY19 which includes 10 owned stores, indicating reasonable level of success with last year’s 4 stores in Malls.

"Although the move is positive, we remain cautious as target of adding 30 stores in next two years (base of 37 stores) need support from good demand scenario. TBZ is back on the dividend list (7.5%) after a gap of 2 years, which shows management confidence in growth and sustaining cash flows.

Balance sheet remains healthy with flat inventories and just 4 per cent increase in debt. We estimate 37 per cent PAT CAGR over FY18‐20 and value the stock at 20xFY20 EPS of Rs 6, thus assigning target price of Rs 120. Retain Accumulate," said Prabhudas Lilladher in a research report.

Meanwhile, commenting on the Indian luxury goods sector a Deloitte India spokesperson said: "India is currently undergoing a rapid digital transformation, whilst battling the challenges of high import duties, introduction of GST and unstable price parity. However, with a positive economic outlook, the demand for luxury goods segment is poised to rise in 2018."

As per the Deloitte report, the worlds top 100 largest luxury goods companies generated sales of $217 billion in financial year 2016 and the average luxury goods annual sales for top 100 companies is now $2.2 billion.