Apart from demonetisation Pokhriyal further spoke on GST, Textile Minister Smriti Irani and how US President Donald Trump's decision to end the Trans-Pacific Partnership (TPP) is beneficial to them. 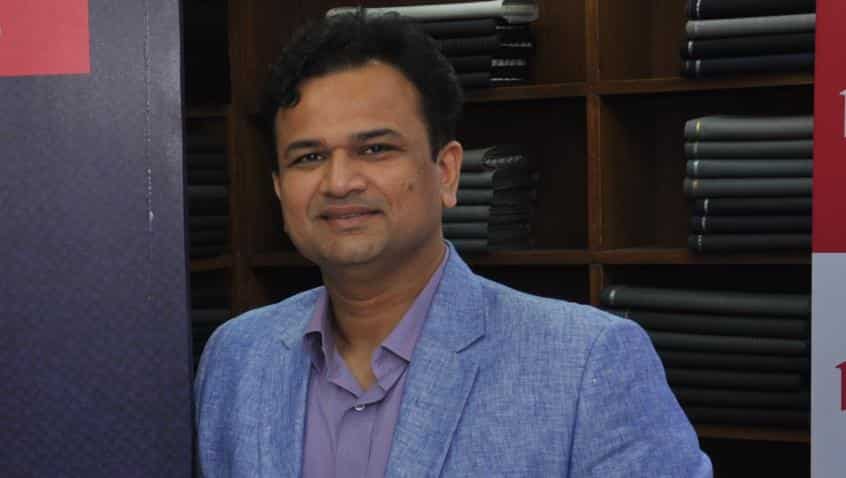 Branded clothes market to double in India in five years

The recent demonetisation move has impacted the whole textile industry in way. Raymond has been one of the worst impacted. “We were having one of the best years of Raymond before demonetisation hit us,” says Sudhanshu Pokhriyal, President – Suiting (Textile Business), Raymond Ltd. He adds that now while cash is now available, there still is poor consumer sentiment and erosion of people wealth that he expects to impact the company at least over the next two quarters.

As of FY2016 Raymond's Textile Business revenue stood at Rs 2,665 crore out of which it's apparel revenue stood at Rs 1,194 crore. The apparel business includes brands such as Park Avenue, Prax fashion casuals, ColorPlus contemporary casuals and Raymond Ready to Wear. The apparel sales for the last quarter grew 6% to Rs. 329 crores Y-O-Y (Q3 FY17) on the back of sustained investments on all four brands.

Apart from demonetisation Pokhriyal further spoke to the Zeebiz team on GST, Textile Minister Smriti Irani and how US President Donald Trump's decision to end the Trans-Pacific Partnership (TPP) is beneficial to them.

For how long do you expect the impact of demonetisation to continue for your business?

Firstly where has been an impact and there is no debate about that. The impact has been varied across channels and across categories. There are certain channels that are heavily cash operated like your wholesale channels, multibrand outlets, etc. And there are other channels which are far more higher in terms of card sales. Wherever there is a cash component there is a higher impact. Even in the EBO you directly go to the end consumer, you don't really have a middleman there. But in a wholesale channels you have dealers, so you have a much bigger cash crunch there. There are three impacts, one is that cash itself was not there, and supply becomes better if that situation will change. But the second impact was because everybody's wealth was eroded, property prices went down, gold fluctuated big time, people used all sorts of mechanisms to convert their money and they ended up losing money. Because of the erosion of wealth there is a clear reduction in demand. Third is because of the sheer uncertainty, people say lets watch for some time.

Now what you see has changed is the first part as cash now is freely available. The other two impacts still remain because the demand and wealth erosion is still there. Because of the uncertainty in people's mind though the cash crunch is gone people don't react immediately to the assurances. In my view you may see it for the whole of the next year. For sure till the next two quarters and then by the second half the year things may be better. This is also because of the base effect. The sales may have taken a hit in the previous year and you may have grown on that. If I don't look at it that way and look at it to where the growth was previously, the impact will be very much there.

Raymond was hoping for an improvement in sales during the mid-January wedding season period, did you seen any growth?

We were having one of the best years of Raymond before demonetisation hit us. All our marketing plans and strategies were coming through in the market beautifully be it out advertising, product offerings, the kind of initiatives we are doing. However, because of this there was a setback. But the market sentiment was really good. Because it was one of those years were as per the Hindu calendar had the maximum amount of weddings. The wedding season was extremely good. In my opinion the wedding season would have been even higher. There is a period between December 15 to January 15 where there are no weddings as per the Hindu calendar. Subsequent to January 15 you see a burst in sales as wedding season continues until June this year, which is a blessing in a way. But after June to November there is a lull, because there is a Shraddh in between and the festive season during which the weddings are not there.

What is the textile industry looking from GST?

First of all GST is a fantastic initiative which the government is implementing. Somewhere it will impact every industry where there is an unorganized sector and we also have an unorganized sector. The entire textile industry is over Rs 3 lakh crore and organised players are not even 25-30%. There are a lot of unorganised players be it in the apparel industry or fabric business. So this will force all the unorganized players to come into the tax net and it will be a far more level playing field. Structurally that is a positive. Additionally we are all waiting for the tax rates to be announced. We don't know which tax slabs we will fall in right now. And as per the government's own plan they want it to be revenue neutral. They don't want to gain revenue because of moving into GST. So I hope they do that because there is no VAT or sales taxes on fabrics. If they charge some tax on the fabrics then it could have an inflationary impact on it. There is already a tax on the apparel side of the business.

What has been the changes that Textile Minister Smriti Irani has implemented since her arrival?

What we have realised is that she is an extremely open person. She has given a ear to the industry bodies whenever they have gone and met her. For example, there are multiple bodies who try to meet the Ministry to tell them about their problems in the industry as she can influence those changes. For GST there were recommendations that for such a big industry having zero sales tax should be taxed. However, it is not that it is zero tax because you pay for taxes in various other ways in terms of excise duty, etc. Many recommendations have been made from the industry and the Minister has been positive towards listening to us. There were some issues with the Weights and Measures Act for which there were some requirements that were to be mentioned on the label, which actually had no meaning in a business like ours. But because the laws were like that you had to mention it. The Minister was very understanding to the problem and so the measures have been taken to remove it from the act. Because at times it can become a source for authorities to misuse it against you. There were also a lot of products that come from China which had duty evasion but the Minister has seen that there is a stoppage on that.

How the export market been a great growth driver for Raymond?

We export to more than 55 countries and our largest exports in the US, Japan and Europe. And we have a direct presence in South Asia, in the Middle East, Bangladesh, Nepal and other South Asian markets as well. Overall globally the market is not very buoyant. For instance, there are huge issues in Dubai and the Middle East and Europe when through Brexit and US went through a major change. In spite of all that our business has grown decently.

We also believe the latest changes which has happened for TPP (Trans-Pacific Partnership), which Trump has implemented after that is going to benefit us. Our suit manufacturing plant in Ethiopia, which is going to come by the middle of this year, is going to created and will be solely be supplying to the US. The cancellation of the TPP which Trump has done which will actually be beneficial to an organisation like ours because it is no longer restrictive to the trans-pacific area.

How is Raymond's tackling the competition from e-commerce companies?

There are various ways of looking at it. In my view e-commerce is another channel. For example, if you have a wholesale channel, TRS channel, MBO channel and now you have an e-commerce channel. If you look at 20 years ago when organised players came in modern trade such as Big Bazaar, D-Mart, etc. came in, everyone was worried that they will take over and the neighbourhood grocery store will shut down. But even 20 years later the total organised players do not contribute more than 8-10% of the total FMCG sales. E-commerce is another channel and it is helping a lot of people and players in reaching products directly to consumers who do not have access. It is a great tool for manufacturers like us rather than to see them as competition. For example we are doing more than Rs 50 crore in sales this year from e-commerce. And we don't go the discounting route, we have been selling full price merchandise and it is working very well for us. In fact, the way I see the e-commerce companies are working is on acquiring consumers and they are all making more losses than their revenues. They will have to compete with brick and mortar players, and they will not be able to spend the money they were able to spend right now. Even when modern trade came in they started giving heavy discounts and many moved from traditional stores, but then they were all in losses for a number of years. Consolidation happened and many disappeared and now they are finally coming back.

What are your marketing plans for this year?

The brand Raymond is the largest and most important for us. We as a company will continue to spend on it and so there will be some ads on that. A large part of our business is woolen fabrics or worcester fabrics. The Raymond brand is a complete solutions brand for a man. If you see the complete man has changed right now. He has become more contemporary. The look and manifestation has changed dramatically from what it used to be 10 years from what it used to be. And there are also specific objectives like on woolen fabrics. When advertised for the woolen fabrics we wanted people to know we are the largest worcerster manufactures in the country and that is why we created the colours of wool campaign. Now what we are looking at is promoting specific brands. As people are looking for functional benefits we started Technosmart and now we are moving into Stretch. Globally there is a move into stretch fabrics as a functional benefit. That is one of our focus areas so you will see some action there. We have also been doing trouser exchange, so will some action there. These are the kind of campaigns for which we are looking at working on.

Due to demonetisation will you be reducing you marketing budget the following year?

We spend 5% of our Lifestyle business revenues on advertising and promotion. Post-demonetisation we were one of the most visible brands on TV. We did not cut our ad spends. We truly believe you have to be on TV and advertising throughout the year. In fact these are the times when you should be more on air, as the clutter is less. We have been on air, we have stuck to our advertising plans and we truly believe that it will be our brand which will take us through.

Branded clothes market to double in India in five years