AK Das, Managing Director & CEO, Bank of India, talks about March quarter numbers and the reason for the decline in NII, provisions, asset quality and recoveries among others during an exclusive interview with Zee Business Executive Editor Swati Khandelwal 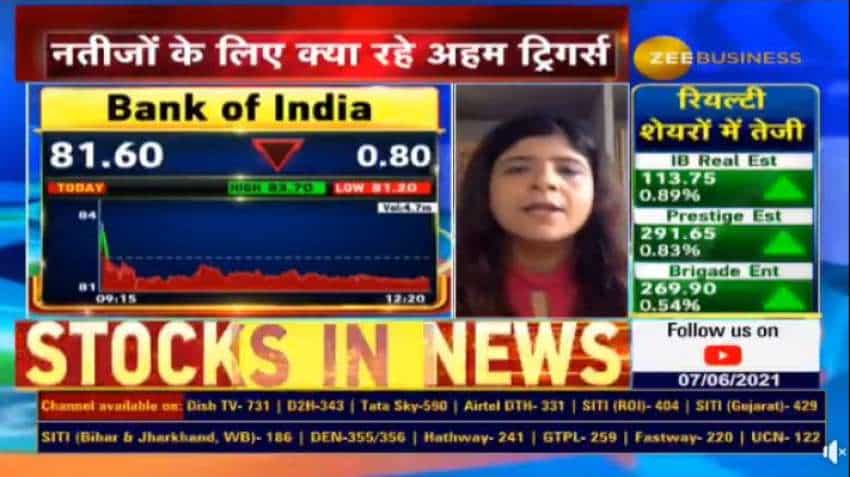 "We have 65-66% rural and semi-urban branches. Basically, we are work on the feet under feet model and some digitization has happened," AK Das says
Written By: Jitesh Kumar Jha
Edited By: ZeeBiz WebTeam
RELATED NEWS

AK Das, Managing Director & CEO, Bank of India, talks about March quarter numbers and the reason for the decline in NII, provisions, asset quality and recoveries among others during an exclusive interview with Swati Khandelwal, Zee Business. Edited Excerpts:

Q: NII has fallen on a yearly and sequentially basis also there is a sequential fall in the PAT. What led to the fall?

A: As far as NII is concerned, our loan growth was not much and it stood at just 1.28% in the domestic. So where the lone growth is less, income will also be less. Apart from this, there are few other reasons for it and they are

For the last few months, for around one and half months, we have been providing loans at the RBLR (Revised Repo Based Lending Rate) under which around 31% of retail loans and 63% of MSME loans are RBLR linked, where the rates are very low. The situation is not similar to the past.

Similarly, a lot of emphases is being given on rate transmission by the Reserve Bank as well as the government. From January 2019 to May 2021, the repo rate has come down by 250 basis points and in MCLR we have passed on 135 basis points to the customers.

Similarly, if you have a look at the repo rate of the last year then it came down by 40 basis points and we did a transmission of 60 basis points.

So these factors will have an impact on the income. A rough calculation suggests that based on our loan book if it reduced by 10 paise then it will have an impact of around Rs 215 crore. At the same time, we also have an obligation to provide loans at the least interest rate to the people. So, these are two to three reasons due to which our yield on advances has reduced. Our margins have also declined. We have reduced our cost of deposit, but in comparison to it yield on advances has shown greater reduction.

Q: What were the provisions for this quarter and going ahead will there be a requirement for additional provisions considering the Asset Quality is still under pressure?

A: First of all, I would like to say that there is no pressure on Asset Quality. I would like to provide some data to explain the percentage of the loan outstanding has come down from 20% in December 2020, when the Supreme Court verdict was not out, to 11.50% now. It was under SMA-1. And, if we have a look at SMA-2, then it stood around 7% in December 2020 and currently, it stands at 2.77%. But, there will be slippages in few accounts. But as you are aware that from the beginning of the last year, we were doing little aggressive provisioning, even if bit low profits are shown but make provisions, so that there is no problem in P&L in the future. So this strategy has helped us and as result, we reduced our provisions in the fourth quarter. We managed to make provisions earlier in which we made provisions of 15% in SMA 0, 1 & 2 each and it has benefitted us, this time. So, we didn’t felt a lot of pressure. We will keep in like this in the future too. As there is a saying 'Always be prudent to over provide in good times, so we will continue to do it so that we cab safeguard and can ensure a stable balance sheet.

Q: Recoveries too have fallen sequentially. Was this due to the second wave of COVID? Also, what is your outlook on recoveries in FY22?

A: We have 65-66% rural and semi-urban branches. Basically, we are work on the feet under feet model and some digitization has happened. When commuting stopped, the lockdown was implemented at any places, which is opening gradually and it has had an impact. Nevertheless, we have posted a decent number in recovery, which also includes a write-off of around Rs 15,000 crore, which makes 45-50%, which is a balance sheet tool. For the future, we have many options, for instance, our NCLAT accounts which in RBI 1 & II list stands around Rs 3,000-4,000 crore and is 100% provided. The remaining NCLAT accounts stand at Rs 35,000 crore and have provisions of 90%. The way NCLAT works is also being changed and it is heard that they will be more active now. So, many accounts will be resolved. So, we are seeing that the prospects of write-back and reduction will be good and around 9 of our big accounts of around Rs 18,000 crore are in NCLAT and are in progress. And, I think that by the end of this financial year, we will be able to reduce our gross NPA by 2.50% to 3%.