Sheikh Hamad who is also called as Rainbow Sheikh, is a zealot for cars and this enormous SUV called Dhabiyan is among his most crazily extraordinary creation. 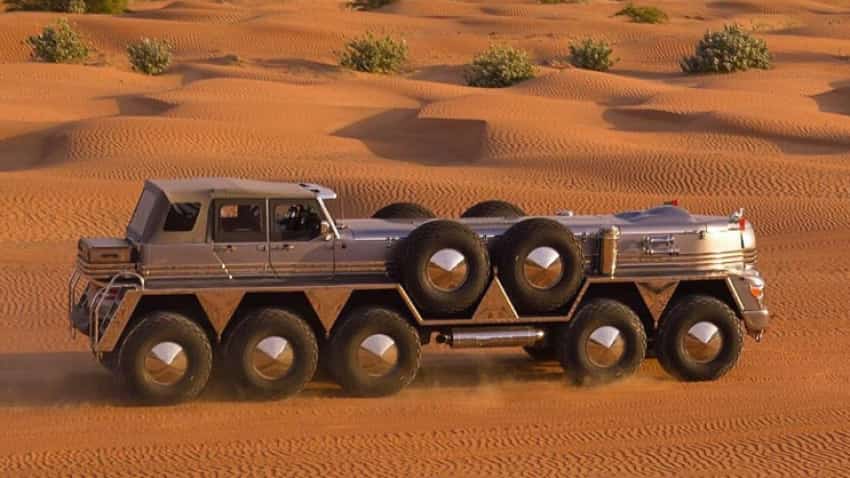 If you ever thought that the potential of how big and heavy a Sport Utility Vehicle (SUV) stayed limited to cars having 5-door wagons like Cadillac Escalade ESV, Chevrolet Suburban or even Toyota Sequoia, Nissan Armada and Nissan Infiniti QX80, then you are definitely wrong. Welcome a new enormous SUV which is packed with a 10-wheeled desert ship which is part jeep, part military truck and part dodge dart. It is find in the home of Sheikh Hamad bin Hamdan al Nahyan who is billionaire from the ruling royal family of United Arab Emirates. Sheikh Hamad who is also called as Rainbow Sheikh, is a zealot for cars and this enormous SUV called as Dhabiyan is among his most crazily extraordinary creation. Take note, not even Mercedes-Benz G63 AMG 6x6 and International RXT can match the levels of Dhabiyan.

Based on the Oshkosh M1075 military truck with the PLS (Palletized Load System), Dhabiyan is also packed with a Jeep Wrangler was annexed to it as a driver cabin.

In  this image you can see the behemoth and beast-like features of Oshkosh M1075 military truck from front and tyres.

Meanwhile, Dhabiyan’s Jeep Wrangler features are evident in the seating body. Sheikh Hamad’s this SUV has changed the way a jeep is, considering the normal version comes for a four-wheel drive off-road SUV.

In one of his posts, you can watch Dhabiyan looking like shining ship among the deserted area. It’s steel-based tyre plates and silver body is definitely eye catching and mesmerizing.

Built and modified by His Highness Sheikh Hamad Bin Hamdan Al Nahyan, Dhabiyan now is known as the Largest SUV in the World.

Dhabiyan is based on the Oshkosh M1075 military truck with the PLS (Palletized Load System), a Jeep Wrangler was annexed to it as a driver cabin. The truck comes with its huge 600hp Caterpillar C15 engine, 15.2-liter, 6-cylinder inline water-cooled diesel. Length (10,8m), Height (3,2m), Width (2,5m) and its amazing mass of 24 tons. Built and modified by His Highness Sheikh Hamad Bin Hamdan Al Nahyan, Dhabiyan now is known as the Largest SUV in the World.

Apart from this, Sheikh Hamad not only took the style of 1940s truck and modern of Jeep Wrangler, but he also included the lights like Ford Super Duty, rear bumper inspired from a Dodge Dart.

Watch a teaser of Dhabiyan here:

Dhabiyan, the Largest SUV in the World!

Being fan of cars, Sheikh Hamad has made sure his collections are one of its kind in the entire world. He is fan of brands like Mercedes, Lamborghini, Ferrari, Porsche and many more.

In 2013, he made the largest truck in the world which is a replica of the classic Dodge Power Wagon. It was being known that, this truck made by highness is 64 times bigger and times the size than the original one,  weighing 50 tons. Breathtakingly, the cabin of this large truck includes full sized kitchen, air conditioned bedroom, bathroom and lounge.

Being part of World War 2, Willys Jeep were among best SUVs, off-road vehicles and roadsters. However, Sheikh Hamad did not spared this one as well, and to everyone astonishment, he developed a replica of Willys Jeep only four times the size. The Willys Jeep in Sheikh Hamad’s ambit now stands over 20-feet tall weighing 4.4 tons.

The name Rainbow Sheikh was derived from his invention with Mercedes-Benz S-Class, which he made in every color of the rainbow during the time of his marriage. There is no exact figure to how many Sheikh Hamad owns, but it is definitely in hundreds. His collection are displayed in Emirates National Auto Museum, among which now also join Dhabiyan.