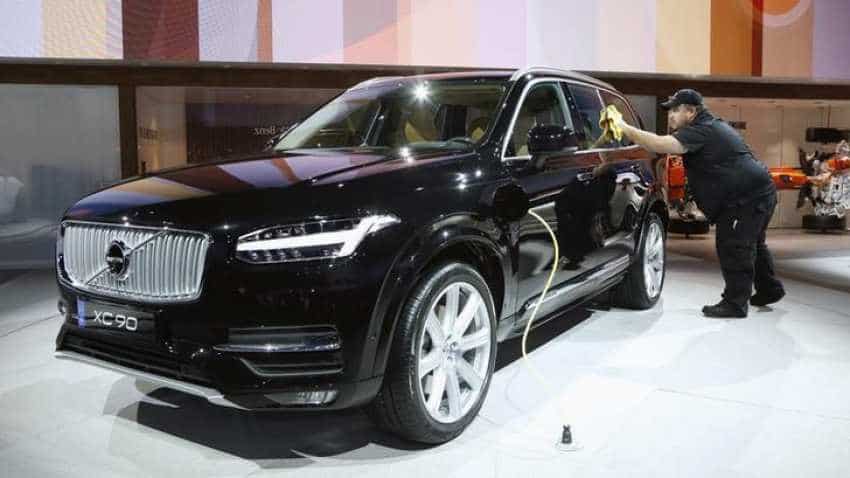 Volvo will be the first automotive company in India to have a Make in India, plug-in hybrid. Photo: Reuters
Written By: PTI
RELATED NEWS

Volvo cars will be able to communicate with each other and that too, soon

Volvo XC 60 V 90 Cross Country to get desi tag in India; see how

Swedish luxury car maker Volvo Cars India would introduce 'Make in India' battery operated plug-in hybrid during the second half of this year, a top official has said. The company besides introducing the hybrid would also look at tapping rural markets in the country under its plan to expand footprint, Volvo India, Managing Director, Charles Frump said. Soon after the government had lowered customs duty on import of parts and components of electric vehicles to 10 from 15 per cent in January, the company discussed its plan to bring in battery-operated electric vehicles to India, he said.

"I think we are going to be the first automotive company in India to have a Make in India, plug-in hybrid. That will be coming on XC90 in our Bangalore facility, in the second half of the year. So this is quite an exciting announcement to make. We already have a CBU plug-in hybrid and I think to make that as a local assembly is exciting for us", he told PTI.

To a query about the localisation level of cars to be introduced in India by Volvo, he said, "In October 2017 we opened our Bangalore facility and we started with XC90 and then over the course of last year we added X90 and XC60. Now, 60 per cent of our vehicles are assembled in Bengaluru from a volume perspective".

"We have decided to expand the line up on the number of cars assembled here," he said.

On tapping tier II and III markets, he said the company was looking at expanding in smaller cities. "Recently we added a dealer in Indore and Raipur. We opened a showroom in Calicut. Volvo has good representation in Vijayawada, Vishakapatnam and so there is good opportunity for us in some of the smaller growing markets", he said.

"But at the same time we have added a showroom in Noida recently. Even in bigger markets, we have seen opportunity (coming up)," he said.

On factors driving sales in rural areas, he said raising income, understanding of luxury cars among customers. "We have 25 outlets now. This year we are looking at two or three more outlets (to expand presence)", he said in response to another question. Frump and senior company officials were here recently to announce the company's dealer Artemis Volvo Cars, which is now certified as a Volvo Personal Service dealer.

Under the Volvo Personal Service Dealer initiative, a customer would get reduction of waiting time by at least 50 per cent, enabling technicians to have direct contact with customers among others.

Volvo cars will be able to communicate with each other and that too, soon

Volvo XC 60 V 90 Cross Country to get desi tag in India; see how