Toyota Yaris first drive: Honda City, Maruti Ciaz get a rival; should you buy? Read on

The Toyota Yaris is a classic Toyota design, nothing exciting but not too harsh on the eyes.Toyota has taken a conservative approach, a bit of aggression with long and slim headlamps which complement the oversized, multi-slat grill. The side profile is also very simple. So is the rear which lacks the dual tone treatment of the front. 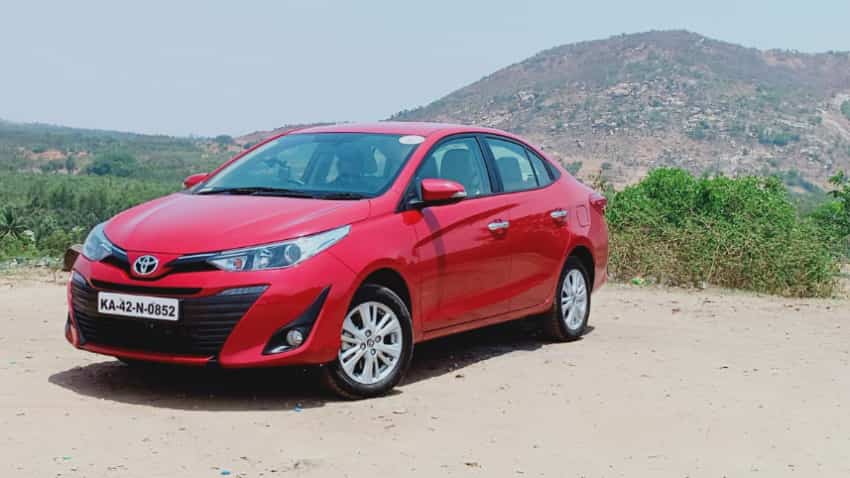 Toyota is finally filling the yawning gap between the Etios and the Corolla Altis. The company has long been absent from the popular segment dominated by Honda City, Maruti Ciaz and the recently relaunched Hyundai Verna. Image source: Zee Business
Written By: ZeeBiz WebTeam

Toyota is finally filling the yawning gap between the Etios and the Corolla Altis. The company has long been absent from the popular segment dominated by Honda City, Maruti Ciaz and the newly relaunched Hyundai Verna. The Toyota Yaris belatedly plugs this gap. The sedan is already available in other Asian countries and it’s availability in India comes after long thought by Toyota. The Yaris is the first all new launch by Toyota in 7 years and is loaded with expectations. To check how prepared Toyota is for the mid-May India launch, we reached Bengaluru for the first drive of this car. Instead of the usual brief about the vehicle, the company began the proceedings with unveiling the safety package the car offers, i.e. a total of 7 airbags as standard including a segment-first knee airbag.

Segment First!
Toyota seems to have learnt a lesson from the rather plain Etios. The lesson that Indian customers are looking for frills. No wonder than the Toyota Yaris is loaded with features unique to its segment. We’ve already spoken about 7 airbags. Complementing this are roof-mounted rear AC vents which can swivel to cool the driver and front passenger. Then there’s ambient lighting, a tyre pressure monitoring system and electrically adjustable driving seats. You can also control the volume and change channels in the audio system by just waving your hands.

Design Cues
The Toyota Yaris is a classic Toyota design, nothing exciting but not too harsh on the eyes.Toyota has taken a conservative approach, a bit of aggression with long and slim headlamps which complement the oversized, multi-slat grill. The side profile is also very simple. So is the rear which lacks the dual tone treatment of the front.The boot integration, however, is smooth but the sloping roofline cuts down the headroom for rear passengers. As a whole, Yaris does not spark the same excitement as the Honda City or the Hyundai Verna. Even the Maruti Ciaz is due for a mid-life lift & tuck which could further muddy the waters for Yaris.

Interiors
Thank God the Toyota Yaris interior is not as bland as the Etios! But, it's not as premium as the City or the Verna either. The dashboard looks decent with its beige and black theme which complements the chrome and piano black inserts. The touchscreen is functional at best. The touch and the screen resolution, both feel ancient. Even the opening and closing mechanism of the DVD player is very cumbersome and almost seems like an afterthought. Gesture control is a segmentfirst and provides much-needed drama to the cabin. The biggest USP though is the bullet-proof material quality. You can be sure that it will last. My favourite partthough, is the roof mounted AC which works well and can be turned to cool the front passengers. The Yaris has a smaller wheelbase than the Honda and the Ciaz but the width more than makes up for it. Three adults can comfortably sit in the rear seat. 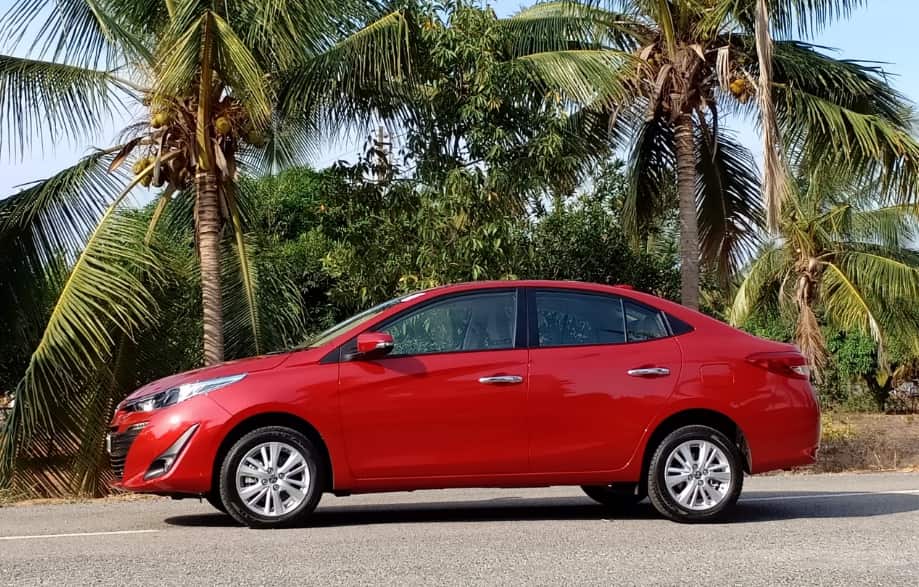 Only in Petrol!
It’s Disadvantage Toyota, even before the Yaris rolls off the production line! The car will come equipped with just a petrol engine at the time of launch. Toyota does not have a diesel to fit in the Yaris and this puts it at a massive disadvantage against its competitors. We tested the 1.5 litre VVT-I petrol engine which produces 107 ps power and churns out a healthy 140 nm of torque. It’s good enough for the car but lags behind both the City and Verna. The CVT transmission works well within city limits even though it felt a little stiff at low speeds. The engine is also very vocal above 4000 rpm, considering the peak torque is reached only at a ear-shattering 6000 rpm. It's an engine that needs attention all the time, giving you very little time to relax. The suspension though is very smooth and the Toyota Yaris glides over most obstacles.

Should I Buy One?
It all depends on the pricing, which Toyota has not yet disclosed. Toyota has the strength of a halo brand. Customers know that its products are trouble free and last forever. Importantly, Toyota has also managed to add to the Yaris the bell & whistles which the Etios experiment lacked. But if it over prices the Toyota Yaris like the way it has the Innova, customers have a large choice of other cars they can switch to.

For Complete Video Review Watch Zeegnition Only on Zee Business at the following time: