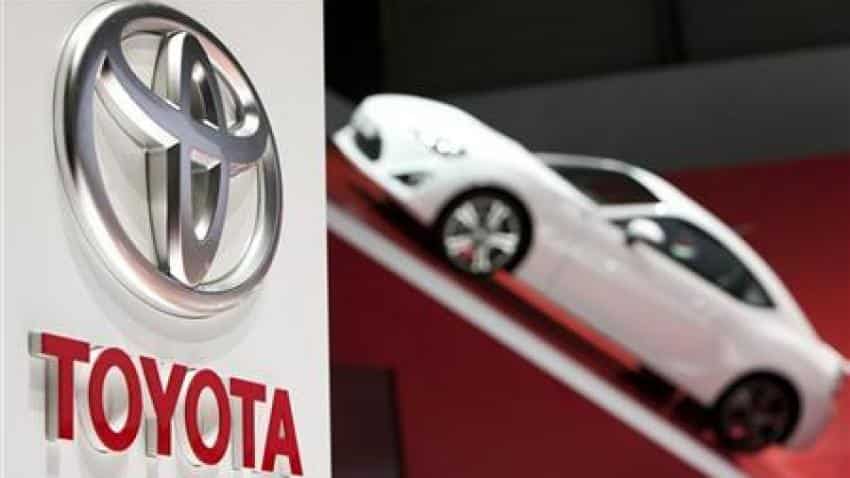 One of the company`s first moves was to cancel contracts with the China unit of its long-term communication and advertising agency. Image source: Reuters
Written By: Reuters
RELATED NEWS

Electric vehicles and the road ahead! Govt mulls THESE measures to accelerate EVs; What Nitin Gadkari confirmed on indigenous EV batteries

Toyota has begun slashing costs, starting with sales and marketing, and shifting resources into research that will help it keep up with new competitors, four people familiar with the matter said.

One of the company`s first moves was to cancel contracts with the China unit of its long-term communication and advertising agency, Dentsu Inc, the sources said.

They say the savings should be plowed into investment in emerging technology such as autonomous vehicles.

"We may be posting record profits, but we don`t think we are keeping up with their pace of investments," one of the sources, a senior Toyota official, told Reuters.

To do that, Kobayashi wants to tap into money once earmarked for automotive marketing and general expenses, which for the year that ended in March totalled 2.72 trillion yen ($24.66 billion).

The company reported 2.4 trillion yen ($21.68 billion) in operating income in the same period, making Toyota one of the world`s most profitable automakers.

The company`s profit margin is about 9 percent. But companies like Google and Apple - now competing directly with Toyota in automotive technology - boast numbers several times larger.

Toyoda and Kobayashi see a sharp contrast between Toyota`s hyper-efficient factory side and its more wasteful sales operation, the sources said.

Barring Beijing Dentsu from new business with the automaker next year, and scaling back work already approved, shows the effort to cut spending is serious, the sources said.

Although the company may bid for Toyota contracts again in 2020, it will be a hard sell, they said. Beijing Dentsu had been doing about $50 million worth of business for Toyota annually.

None of the four wished to be identified because they were not authorised to speak to the media about the issue.

Toyota was frustrated with the cost of at least two events Dentsu organised in China: a ride-and-drive for Toyota’s premium Lexus brand in March and the Beijing auto show display stand for Toyota in April.

A review by the automaker showed "out-of-control extravagance in how it executed those events - not over-billing," another one of the sources said. Beijing Dentsu declined to comment.

It was not the first time Toyota had clashed with Dentsu; in 2016, the marketing company admitted to billing for services it did not perform.

Toyota`s cost-cutting effort takes aim at wholesale outsourcing, known in Japan as "marunage," according to two of the sources. It can encompass items such as media buys, promotional events, and consumer and market research.

The sources added that Toyoda and Kobayashi see marunage as flab weighing on the efficiency of Toyota`s non-factory operations, and hurting the company`s ability to research and produce better vehicles.

At Toyota factories, engineers make a point of knowing everything they can about each component and process, all the way down to what each part costs. Even if they outsource production, they would produce it on their own first to understand its cost structure, the sources said.

Toyoda and Kobayashi want to instil more discipline in Toyota`s sales and marketing teams, and to move in-house some of the jobs routinely outsourced today, the four sources said.

That, the executives hope, will help give the company more financial firepower to keep up with Silicon Valley, which is pouring money into future automotive technology.

For instance, a lawsuit Waymo filed against Uber over trade secrets revealed that Google`s parent company, Alphabet, spent $1.1 billion developing self-driving tech from 2009 to 2015. That`s about what Toyota set aside to fund a research institute it launched in 2016.

On June 13, Toyota invested $1 billion in the Southeast Asian ride-hailing app Grab, giving it access to trip data that could help it develop next-generation services.
Other established automakers are also taking steps to reshape their marketing operations. Ford has tried to "drive greater marketing efficiency" by using new tools and technology rather than investing in traditional methods, the company said in a response to questions. The effort, however, doesn`t include Ford`s China unit or Lincoln brand.

Kobayashi and Toyoda focused first on Beijing Dentsu in part because of the outsized Lexus event in March in the southern China city of Shenzhen, which Toyoda attended, the sources said. Both men declined to be interviewed for this story.

What infuriated Toyoda and Kobayashi most, according the four sources, was what they described as the unnecessary extravagance of the event.

Toyota in late March then began a last-minute cost-cutting effort on the display Dentsu had designed for the Beijing auto show in April.

At a visit to the display during the event, it was clear where expenses had been trimmed: some rooms did not have ceilings, and downgraded VIP areas originally outfitted with upscale tables and seating now had steel-pipe chairs and other simple furniture.

Generally, a stand such as the one Dentsu assembled would cost one billion yen ($10 million) or more. Toyota was only able to slightly reduce that cost.

"Why spend this much money when we use an auto show stand once?" said one of the knowledgeable individuals. "It`s this kind of out-of-control expense we had rein in."

Electric vehicles and the road ahead! Govt mulls THESE measures to accelerate EVs; What Nitin Gadkari confirmed on indigenous EV batteries