One of the popular Indian automobile companies, Tata Motors is offering huge benefits on Tigor. As per company, there are benefits up to Rs 1,00,000 on this sedan. 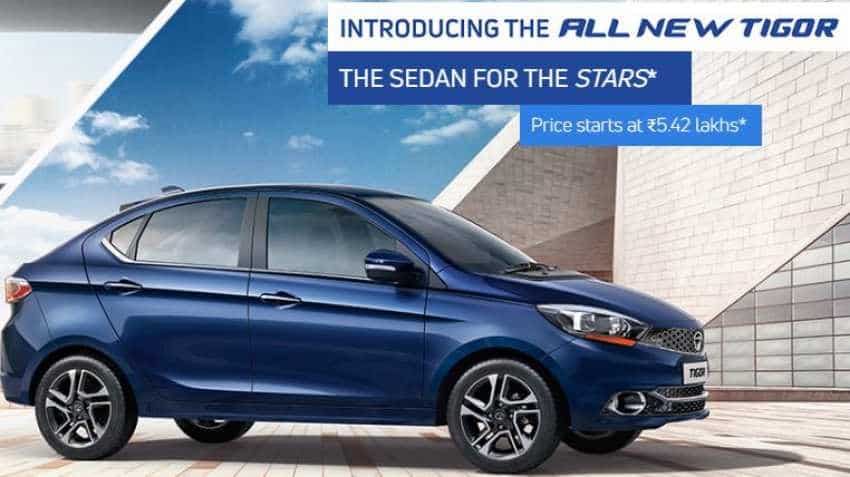 The current price of the car starts at Rs 5.42 lakh, ex-showroom Delhi and goes up to Rs 7.38 lakh. (Official Website)

One of the popular Indian automobile companies, Tata Motors is offering huge benefits on Tigor. As per company, there are benefits up to Rs 1,00,000 on this sedan. Tata Tigor is a compact sub 4-meter sedan that is being offered with a massive cash discount of up to Rs 1 lakh. The offer is valid on the Tata Tigor 2018 facelift, that was launched with a price tag a of Rs 5.20 lakh. The current price of the car starts at Rs 5.42 lakh, ex-showroom Delhi and goes up to Rs 7.38 lakh.

However, the Rs 1 lakh discount on the Tata Tigor facelift is valid only till March 31st, 2019. The rivals of the car are Ford Aspire, Volkswagen Ameo, Honda Amaze and Maruti Suzuki Dzire. The facelift version of Tata Tigor was launched to attract new customers. The facelift model has few cosmetic upgrades with several other new features.

The design of the car was new and it was updated with a new diamond shaped grill along with the dual chambered projector headlamps. The dual tone alloys of 15-inches gives a premium look to the car. While at the rear, there are the crystal-inspired LED tail lamps and an LED high mounted stop lamp on rear windshield.

The new leather upholstery adds beauty to the car with a 7-inch infotainment system from, compatible with Android Auto along with video playback. The facelift version has also got the all new reverse-parking camera. The Tigor has a dual airbag and ABS with EBD as a standard. Also, now it has received a chassis which is reinforced with high strength steel. The car also makes a sound, if the driver has not wore a seatbelt.

The Tigor facelift still has that same 1.2-litre Revotron petrol engine, while the diesel one has 1.05-litre Revotorq. The petrol engine juices out 84 bhp and 114 Nm of peak torque while the diesel one generates 69 bhp and 140 Nm of peak torque. The top petrol variant has an AMT option, however diesel variant does not get an AMT but only has a 5-speed manual transmission.

Tata Tigor has been struggling since its launch in the market. The sedan has faced a tough competition from rival models like Swift Dezire, which remained highest selling car in 2018. Another competitor, Honda Amaze has surpassed all expectations and is doing good business in the market.

Tata has been India's one of India most trusted automobile brand with popular cars like, Tigor, Nexon, Bolt, Safari Storme, Harrier, Hexa, Tiago, Sumo etc. After aquiring Land Rover Jaguar, Tata has entered the markets of premium and luxurios cars as well.